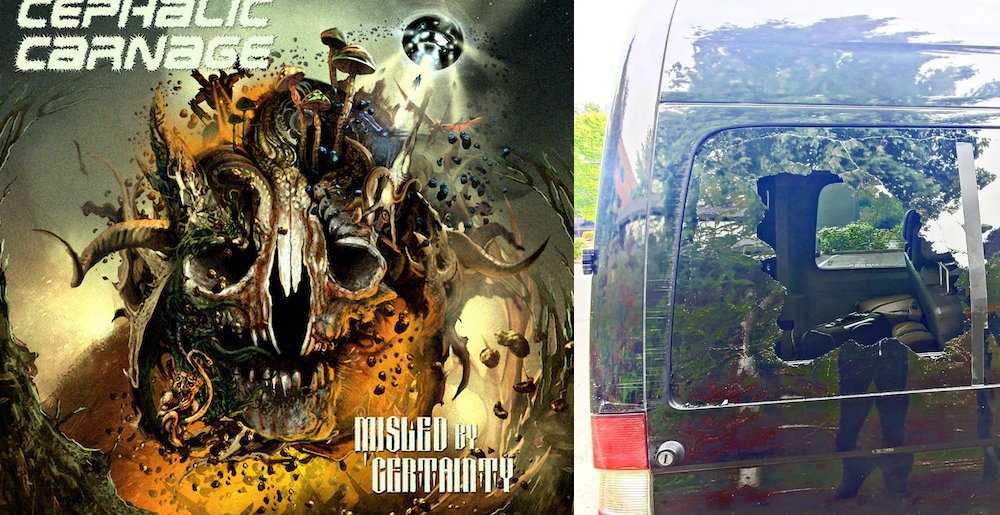 If there’s a hell, there’s a special place in it for pieces of shit who break into touring artists’ vans and steal their gear. And apparently, one such piece of shit in or around Portland, Oregon, has just reserved themselves a sharkskin dildo-festooned seat in that corner of the afterlife, because they broke into the van of Denver death metal crew Cephalic Carnage and stole one of their guitars.

The band posted a photo to their Facebook of their broken van window with the caption, “Portland was fun.” According to The PRP, the dickfors made off with rhythm guitarist Steve Goldberg’s PRS guitar, so locals should keep an eye out for it.

The band have also commented on their post that that their PayPal is [email protected], so if you can, toss these guys a couple of bones so they can stay on the road. Meanwhile, they’re on tour now with Max and Iggor Cavalera’s Sepultura hits experience, so make sure you catch them live at one of the following dates:

Metal Sucks Greatest Hits
0 -
Gwar’s Oderus Urungus Reviews Megadeth’s “Super Collider”
0 -
Unearth are the Slayer of Metalcore
0 -
Report: “The Number of Heavy Metal Bands in a Given Country is Associated with its Wealth and Affluence”
0 -
Former Attack Attack! Bassist John Holgado is the Stupidest Human Being Ever
0 -
15 Ways Your Unsigned Band is Doing It Wrong
0 -
That Time Shaun Got Drunk and Filmed a Music Video with His Cat