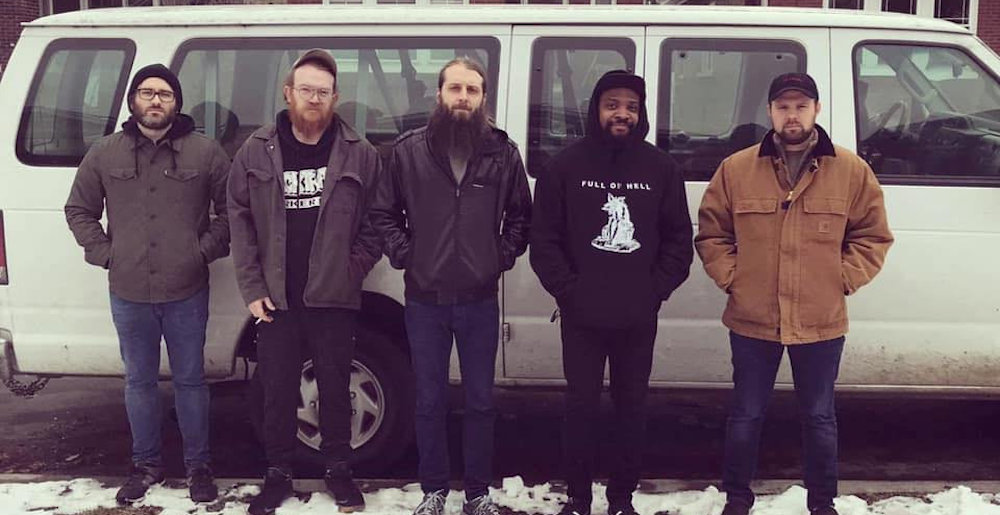 You might not expect Colour Design when you go to Little Rock, Arkansas. Country music, sure; harrowing sludge, of course — but soaring, shimmering post-hardcore fueled by divine personal energy? Not so much. And yet the five-piece have become a local staple, offering fans a beautiful tidal wave of emotional sound in which to let themselves float. Now, with the video for their new single “Feel Like Going Home,” Colour Design have visually translated their sonic profile, offering viewers a look into their performance style, their mindset, and the place they call home.

You can watch our exclusive premiere of “Feel Like Going Home” below. Before that, though, I spoke to vocalist Shawn Hood, guitarist Daniel Cox, and drummer Shane Clinton at this year’s Mutants of the Monster fest, to learn about the band’s history and process. Here’s what they told me:

In your own words, how’d Colour Design come together?

Shawn Hood: The band came together in 2015. Me and Jesse [Kelly, guitars] used to play together in a band a long time ago, and we were talking about doing something. I was really trying to do something more like Cursed — I was listening to a lot of that. Eventually we started jamming…then Daniel and Aaron [Wolfe], they both had post-metal bands. And Wolfe, our bassist, was one of my longtime friends. We were trying to figure out our drummer, and I thought, I know a guy. We hit [Shane] up and we started just getting together and figuring out what we wanted to do. At the time, I was listening to a lot of Citizen and Title Fight, stuff like Balance and Composure. Basically, my vocal is an imitation of that, to a point.

Daniel Cox: Me and Jesse were listening to all those classic shoegaze bands at the time. Since Wolfe and Shane are into post-hardcore, they were throwing that into the mix. Me and Jesse were performing on these big guitar rigs, trying to get some big, ethereal, 3D-type guitar work in there. It ended up really meshing into something which seems unique to us.

So you didn’t come into the band with a sound or genre in mind?

DC: I’ve never played in a band where we thought, This is the genre. I don’t think that necessarily breeds anything. Let’s jam, so that it turns into something that could be unique.

SH: I came in with an idea of what I wanted to do, but I was just trying to figure out a vibe vocally. [Daniel] will come with a riff, and we’ll just jam it out, vibing it. We record on our phones, so I’ll take it home with me and write to it. I write to our songs, musically. That’s why the vocals are in the places where they are. I try to let the song breathe.

In your mind, what makes a Colour Design song? What does it need?

Shane Clinton: First of all, I think we have the best bass player. Just having him is completely invaluable. I couldn’t imagine playing in this band without him, specifically because the guitars are so soaring, and that’s where we get our shoegaze influence. And me and Aaron need to be working off of each other. When I’m writing a drum part, that’s what’s important to me — that me and Wolfe are working together, giving it a driving force.

DC: It’ has to be pretty, but massive. The volume is part of the live show as well. It sounds different on the record, but live…we don’t want it to be oppressive or tiring. There’s a little pretty pop song at the bottom of the entire thing. We want to have that trickle through.

When I think of Little Rock’s music scene, I don’t think of music as shimmery as yours. How does Little Rock, or Arkansas at large, inspire you?

SH: I just think the music scene here is very vast. Everybody’s into a whole bunch of different stuff. Most of us like country, rap, indie rock. You’ll see the most metal dude, and he likes Phoebe Bridgers. I listen to a lot of R&B and soul music, more than anything. I play a lot of rap between our sets, because I want everyone to have fun, to have a party. Because you know what, we’re probably gonna make you feel a little depressed when we play! If you want to sit there and headbang, headbang! If you wanna look at us, look at us. If you wanna move, move. I’m gonna do what I’m gonna do because I’m having fun. This is a release for me.

It’s interesting that for all your post-hardcore and shoegaze focus, you’re connecting with older and more diverse musical traditions. It’s not just locked into the scene.

SH: I listen to everything. With this last album, I’ve been listening to a lot of female vocals. I just take certain things vocally and place things here and there. My favorite band is the Doors, after that is Nirvana. “Rock music,” quotation marks. Erykah Badu and Sade are queens. Vocally, I take a lot of stuff from a lot of different things. And that’s what makes us different. I’m not doing some typical shoegaze vocal. I’m doing my own thing, and I don’t know what the fuck that it.

Do you ever feel the need to draw a line between the prettiness and the intensity? To favor one or the other?

SC: I think there’ve been more times that we’ve had to make things a little light, add a little bit more dynamics. A song will be relentless, and driving, and we’ll have to chill it out a bit. So yeah, but honestly, in the songwriting, just between him and Jesse, how they feed off of each other, it evens out.

Who’s a band that you guys would drop everything to open for?

SH: There are so many bands! We played with Drug Church in December here, and that’s my favorite band. Greet Death is great, Converge…there are so many dope bands that I grew up listening to, that if any of them hit us up, I’d say, let’s do this.

Check out our exclusive premiere of the video for “Feel Like Going Home” below. Keep up with Colour Design via their Bandcamp and social media.