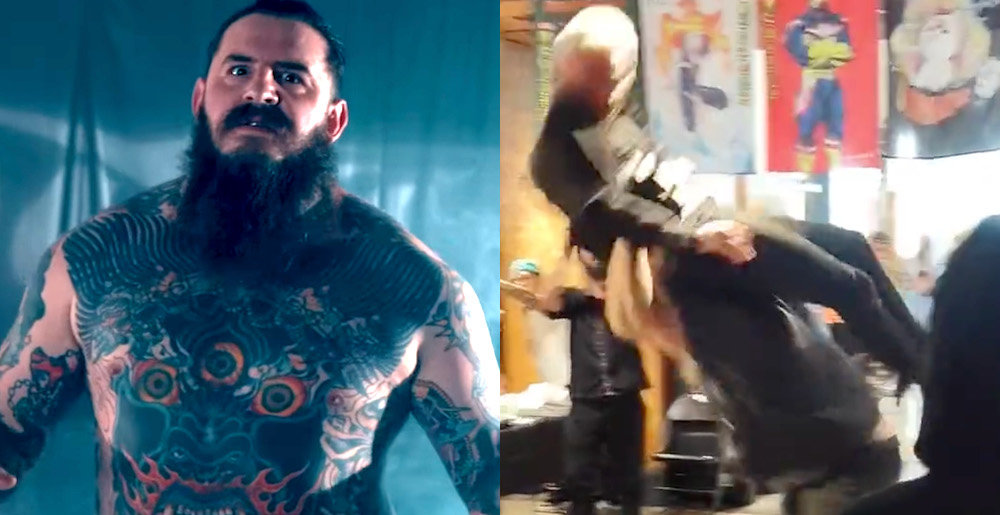 Last year saw hardcore act God’s Hate release their self-titled album to critical acclaim. And with good reason — the record is a bonafide face-splitter, equally perfect for pumping iron at the gym and destroying an entire house’s worth of small appliances and precious heirlooms. And as I’m sure most of you know, God’s Hate frontman is Brody King, also known for his work with All Elite Wrestling. Now, we’ve found out that not only is Brody not taking a break from his craft, but he’s also officially part of a wrestling feud, as he put fellow AEW wrestler Darby Allin through a table at an autograph signing.

Now, before a million and one Comments Section sports critics push their glasses up on their noses and weigh in, let’s make it clear: we are neither worried for Darby Allin’s life or concerned that King has somehow gone off the rails. Not only did Allin recover from this vicious attack at the Southcenter Mall in Seattle where he was signing autographs, but AEW also retweeted the fan-shot footage you can see below. So it’s very clear this is the continuation of a storyline for the wrestling franchise.

That said, HO DAMN! One minute, Allin’s doing some skateboarding tricks and shit, jumping off a ladder, and the next, Brody shows up, puts him in a sleeper hold, and then power bombs him through a merch table before throwing shirts and screaming at him. As Figure Four Online points out, this is a continuation of Royal Rampage from two weeks ago, when King slammed Allin outside of the ring in order to win a match. So, AEW fans, know that the King/Allin feud is far from over, and that we might see some more public displays of brutality moving forward.

Check out the video below, and don’t try this at home.

You know it’s all about the BOOM

We discuss all things Every Time I Die, wrestling and the intersection between those two worlds, including Andy's road from metal icon to wrestling [...]