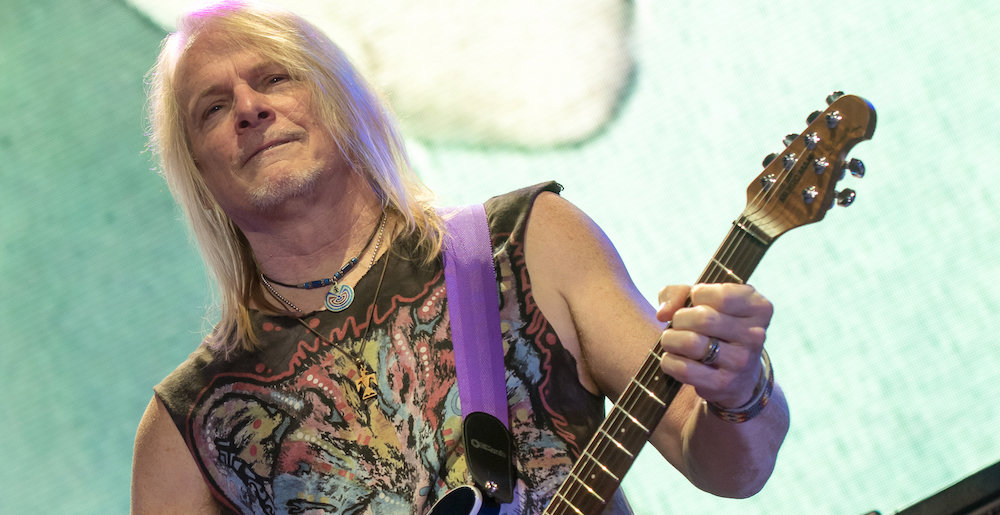 A few months ago, Deep Purple guitarist Steve Morse announced that he’d be taking a hiatus from the band, replaced on the road by Simon McBride. But now, Morse has officially quit so that he can be with his wife during her ongoing battle with cancer.

“Deep Purple announces that Steve Morse will be stepping back from the band, having been its guitarist for more than a quarter of a century. Steve’s personal circumstances have made it impossible for him to commit to the band’s schedule throughout 2022 and beyond.

“A few months ago, Steve openly shared with the band’s fans the sad fact that his wife, Janine, is battling cancer and, in his own words, ‘I simply must be there with her.’

“Since joining the band in 1994, Steve has written and recorded eight studio albums with the band: ‘Purpendicular’, ‘Abandon’, ‘Bananas’,  ‘Rapture Of The Deep’, ‘Now What?!’, ‘Infinite’, ‘Whoosh!’ [and] ‘Turning To Crime’. In addition, Steve has also recorded many live records with DEEP PURPLE over the years.

“Steve will be greatly missed by band, crew, management, record label and all those that had the pleasure of working with him over the years.

“Steve has always been hugely grateful for the support and love of Deep Purple fans across the globe.

Says Morse in his own statement, as issued by the band:

“Last Autumn, I suddenly left the Purple writing session in Germany because my wife was having a real medical crisis. Almost a year later, we are learning to accept stage 4 aggressive cancer and chemo treatment for the rest of her life. We both miss being at shows, but I simply couldn’t commit to long, or far away tours, since things can change quickly at home. I suggested lining up a substitute guitarist last Autumn, hoping we could see the miraculous cancer cure all of us have heard about. As time went by, I could see the way things were heading though, after 28 years of being in the band.

“I’ve already played my last show with Purple back in Florida on the Rock Legends Cruise. I wish to thank the listeners who so strongly supported live music and turned every show from a dress rehearsal to a thundering, exciting experience. I’ll miss everybody in the band and crew but being Janine’s helper and advocate has made a real difference at many key points.

“As Janine adjusts to her limitations, she is able to do many things on her own, so we will try to play some shorter nearby concert tours with friends to, hopefully, get both of us out of the house!

“I know Simon has the gig nailed already, but I’m now handing over the keys to the vault which holds the secret of how Ritchie’s “Smoke on the Water” intro was recorded. I guess you have to jiggle the key just right because I never got it open.”

This is obviously a bummer for all involved, but if there’s any reason to take a step away from the public life, it’s to care for someone you love during one of the hardest roads anyone has to walk down.

Everyone at MetalSucks sends their heart out to Steve and Janine during this difficult time.

Metal Legacies 0
Who Is the Greatest Drummer of All Time? Lars Ulrich, Richard Christy Weighs In
September 17th, 2020 at 11:19am Axl Rosenberg

Metal Sucks Greatest Hits
0 -
What Will Happen When a Member of Metallica Dies?
0 -
Slipknot’s Corey Taylor Shares Photo of “Post-Gig Make-Up Debacle” Beneath His Mask
1230 -
Loutallica’s LuLu: The MetalSucks Reviews
0 -
Metallica’s St. Anger Was Released Ten Years Ago Today
0 -
Exclusive Interview: Lamb Of God Drummer Chris Adler on Randy Blythe’s Imprisonment, Upcoming Tour and the Future of the Band
0 -
It’s Time to Stop Thinking of Women in Metal as WOMEN in Metal