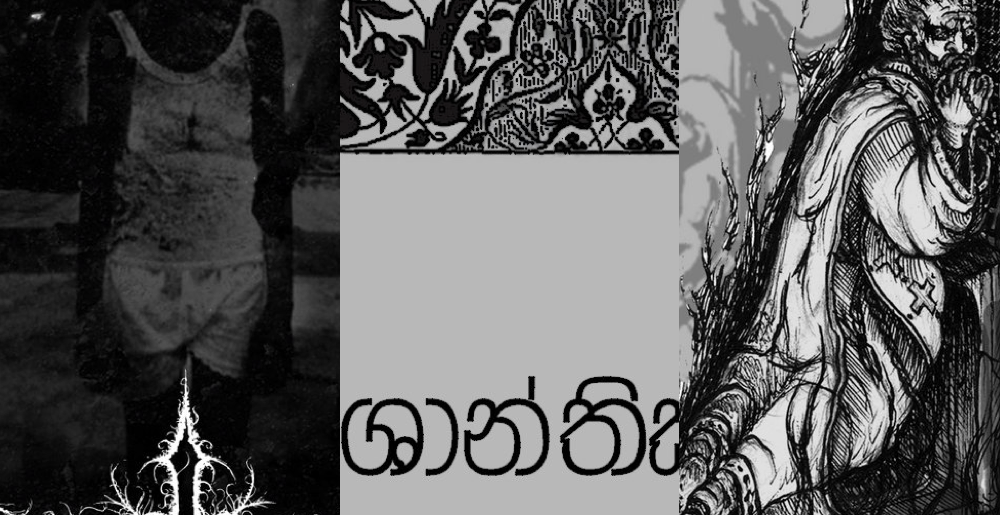 In doing metal genre research, I am often most fascinated by contrast. Sri Lanka—bright, sunny, perhaps optimistic. Black metal—foreboding, nocturnal, depressive. The Sri Lankan metal scene is diverse with a variety of bands but black metal is the most prominent subgenre in the region.

While there were more Sri Lankan black metal bands considered for this list, we’ll start things off with the 10 best selections.

Sri Lankan musician Buddhika can be heard on projects A Village in Despair and Abysmal, though it is Plecto Aliquem Capite (Suffer Capital Punishment) where his unhinged noise is represented to the fullest. Bands such as Sigh are defined as avant-garde black metal and Plecto occupy similar territory, with shrieks, cries and moans coming perpetually and savagely. Since 2008, the band has released many singles and EPs, each a noisy and tormented piece of work that conjures feelings of being put to a slow execution.

A Village in Despair

Also featuring Buddhika from Plecto Aliquem Capite (along with guitarist Sandum of Rathas), A Village in Despair formed in 2017 and unveiled their first track during that year. “Hope and Longing” features Buddhika’s trademark wails and moans, though set to a more traditional black metal backing, bringing to mind Mayhem’s work with Attila. Their latest track, “In Our Water, In Our Air” is another mid-paced scorcher with a jarring atmosphere conjured by the wild frontman’s performance.

Arguably the most famous black metal band out of Sri Lanka, Dhishti take elements of DSBM and put them through their own cultural funnel. The band conjures introspective and depressive moods on tracks like “Meditation 1” and “Meditation 2,” which clock in at 22 minutes each on the Meditation of Death LP. Vocalist Jayakody can also be heard in Solitary Depression, a depressive black metal project with suitably sorrowful titles such as “Failed Attempts.”

Colombo’s Funeral in Heaven are perhaps the most folk-infused black metal band you’ll hear out of Sri Lanka, with a sound that is utterly bleak and depressive while incorporating native instruments like the esraj and the tabla. The band has been practicing the dark arts since their first demo, Blasphemy is Our Throne, in 2006.

Further supporting the idea that Sri Lankan musicians take a divide and conquer approach, members of Genocide Shrines and Plecto Aliquem Capite make up Funeral in Heaven. Check the 2011 split with Plecto, Astral Mantras of Dyslexia, for a Sri Lankan audio immolation.

Breaking from the style of the members’ aforementioned other bands, Genocide Shrines turn up the aggression, mixing elements of death metal with a blackened aesthetic. In a live setting, they don hoods and gas masks.

They have been churning their ebony mix since 2011, with Manipura Imperial Deathevokovil: Scriptures of Reversed Puraana Dharmurder standing as a cult Sri Lankan classic. Their performances are something to behold and they have released multiple live albums.

Regarded as the first Sri Lankan black metal band, Siblings of Hatred have been around since 2001, influencing many of the bands that came after. Their sole recording, Forest of Dark Emotions, is a tough, bottom-heavy piece of thrashing black metal. True to its name, the album’s lyrics take the listener through the forest of dark emotions. Siblings of Hatred disbanded after this release, but have since reformed.

For cavernous, raw-sounding black metal, look no further than the destructive three-piece known as Arra. Formed in 2011, they have made their imprint on the scene with their demos Mass Sacrificial Rites and Vatican Hate, though it is their 2018 album, Upheaval of Destructive Hate that comes in like a soot-filled cyclone. Drummer Obliterator is the VIP of this release, adding some high technicality to the primitive shredding.

Nefertem have a brighter and more melodic sound than many of their countrymen. The production on their debut LP, The Defiance, is as crisp and clear as the waters of Unawatuna, with guitar work that feels grounded in more traditional forms of heavy metal. Despite the clean production, the vocals are as coarse as coal, which makes Nefertem an intriguing listen.

Get those camouflage shorts on, because now we’re going to war. Konflict are not black metal in the strictest sense of the term, though they are adjacent and, due to their interesting nature, deserve a spot here. Konflict are a grinding, noisy beast of a band with a sound akin to a war commencing in a scummy, leech-filled swamp. The band shrouds the vocals in bubbly distortion, assuring the only element clearly discernible on their album Third World C.O.N.T.R.O.L. is the machine gun drumming. The rest is blast upon blast of amphibious assaults.

Massive and hate-filled, Serpents Athirst bring forth an urgency with their sound. Vocalist Obliterator (who also drums in Arra) shows that he is skilled on both ends of the stage, with his performance on the band’s EP, Heralding Ceremonial Mass Obliteration, being a clinic in lyrical sorcery. Dim the lights and crank up the extremity.

In our tireless quest for metal excellence, we at MetalSucks […]

Metal Sucks Greatest Hits
0 -
MetalSucks Readers Declare Pantera The Most Unnecessarily Shat Upon Band in Metal!!!
0 -
I, For One, Welcome Our New Robot Overlords
0 -
Exclusive Interview: Damien Echols of The West Memphis Three on His Life After Death
0 -
Footnotes: A Handy Catalog of Every Song from Which Avenged Sevenfold’s Hail to the King “Borrows”
9660 -
…And F**k You, Too.
0 -
Rigged: Nile’s Karl Sanders