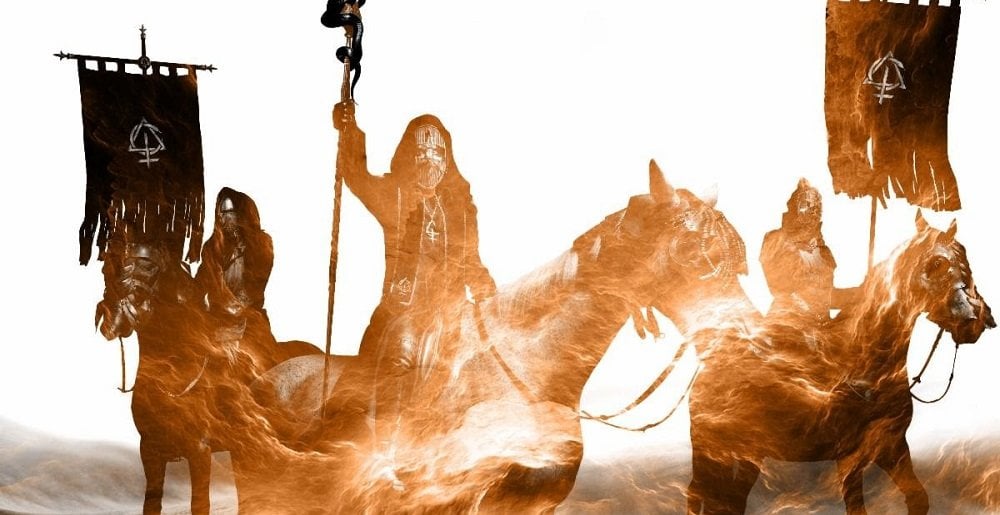 Behemoth Goes Digital in New Video for “Thy Becoming Eternal”

The visuals in the music video for Behemoth‘s latest single “Thy Becoming Eternal,” may be new, but the crushing tune is supports is nothing but pure black metal aggression.

Released just three weeks before the release of the band’s 12th studio album Opvs Contra Natvram, the band says the video for “Thy Becoming Eternal” tells the story of “finding strength in times of misfortune.”

With this being the third single off their upcoming album, frontman Adam “Nergal” Darski said the band opted to continue their recent trend of putting out animated videos, yet seeking a new visual direction by tapping Japanese animator Ruben Fro.

“Legions! Our new offering from Opvs Contra Natvram — ‘Thy Becoming Eternal.’ As always, we’re trying to keep things fresh! The video was produced by talented Japanese animator, Ruben Fro, who created this epic, aeonic CG landscape for our stoic warrior to journey through. The song itself is a fast and furious beast with a bombastic ending, definitely one of the most intense songs in Behemoth’s catalog. Let us know if you agree!”

Nergal has found himself in the headlines in recent weeks by publicly espousing messages of positivity and equality, with topics ranging from his friendship with Metallica drummer Lars Ulrich to the need for men and women to have the same rights.

Previously, Nergal said the band’s vision for Opvs Contra Natvram was all about cancel culture and social media.

“The album title means going against the current. It’s the negative of the values and morals and ethics that I stand against. I’ve seriously been wrestling with destructive tendencies in pop culture — cancel culture, social media, and tools which I feel are very dangerous weapons in the hands of people who are not competent to judge others. That’s something which I find very destructive and disturbing — and extremely limiting coming from an artists’ perspective. This is my middle finger to that. There’s a song on the record called‘Neo-Spartacvs.’ Spartacus was one of the most iconic rebels in history who went against the most powerful empire of all time. In the end, it’s me screaming, ‘I Am Spartacus, and so are you!’ I want to spark that flame of rebellion. If something seems wrong then stand up to it!”

Check out “Thy Becoming Eternal” below, followed by the album’s details. Opvs Contra Natvram drops September 16 via Nuclear Blast, and is available for preorder.

Metal Sucks Greatest Hits
1,3240 -
Wes Borland: Still Cool In Jakarta
0 -
Op-Ed: When Did Slayer Start to Suck?
0 -
BREAKING: Joey Jordison Back in Slipknot as Percussionist!
0 -
Rigged: Wintersun
0 -
Eleven Useful Tips for Local/Unsigned Bands
0 -
That Time Shaun Got Drunk and Filmed a Music Video with His Cat