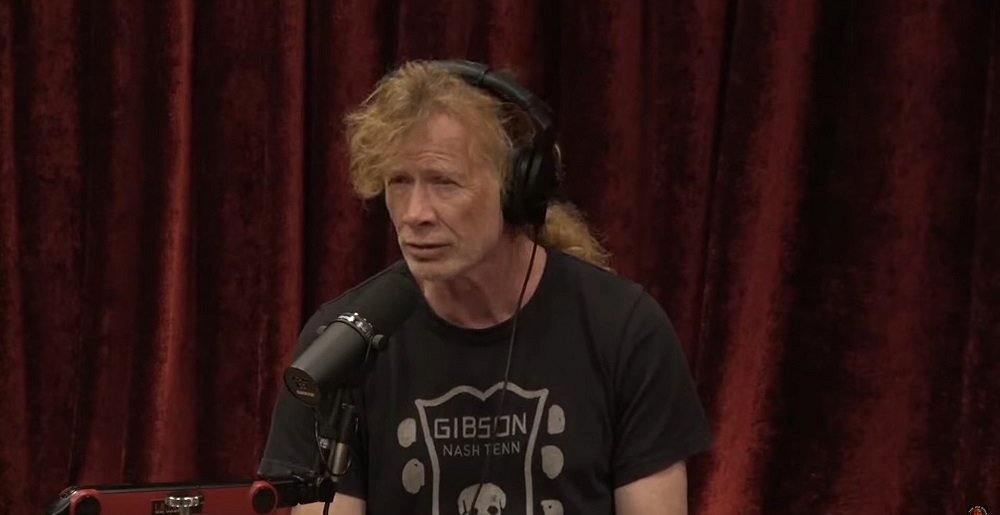 Hold the phone — we have a story with Dave Mustaine and Joe Rogan talking about Metallica? *cha-ching!* We’re gonna eat well tonight!

In a recent interview on the Joe Rogan Experience, transcribed by Blabbermouth, Mustaine sat down to promote Megadeth’s upcoming album The Sick, The Dying… and the Dead! to Rogan’s millions of followers. Naturally during his time on air, Mustaine was asked about that time in 1983 when he was kicked out of what would become the biggest band on the planet for the next few decades, Metallica.

One of the biggest points of contention between Mustaine and his former bandmates has been whether he should be credited for songs that were recorded for Kill ’em All, as well as some tracks from Ride the Lightning and Master of Puppets. It’s even been so contentious over the years that it ended up derailing the re-release of the No Life Till Leather demo tape.

However, even though he was reportedly furious after hearing Kill ’em All for the first time, Mustaine in 2022 says it simply “bothered” him.

“The thing that bothered me the most was I had all my music, and I left it behind and I said, ‘Don’t use my music.’ And of course they did. They used it on the first record [1983’s ‘Kill ‘Em All’], on the second record [1984’s ‘Ride The Lightning’]. There’s parts of my music on a song on the third record [1986’s ‘Master Of Puppets’]. All the solos on the first record are mine, except that they’re just performed by Kirk [Hammett, Metallica’s current guitarist]. And [they’re] close but not the same. And he’s not a bad guitar player.”

Mustaine was later asked if he received any royalties for those songs. Though he reportedly got most of them, he contested that Hammett was incorrectly receiving royalties for “Metal Militia” for “many, many years.”

Ultimately, Mustaine said he’s good where he is now and that he doesn’t feel any bitterness or sadness over how things went down with Metallica.

“Not bitterness — I’m over it. It’s just money. At the end of the day, my happiness and my family and my wife and my children are more important to me than anything in this world. I love our fans. I have so many things in this life that I’m happy about. But, man, it’s my family. And obviously my relationship with God. I take that very, very personal. And I don’t talk to people about it; I don’t push it on ’em at all. It’s my thing. And I just look at it like where I’m at right now… Yeah, [I was] 20 [years old] in Metallica, and now, look at me, I’m 60 [years old] in Megadeth. And I’m a Grammy winner. I’m a New York Times best-selling author — all these things.”

Megadeth’s new album The Sick, The Dying…And The Dead! drops September 2 and is currently available for pre-save and pre-order.

Megadeth are currently on tour with Five Finger Death Punch, The Hu, and Fire From The Gods. If you want to catch them live, check out the dates below.

Metal Sucks Greatest Hits
0 -
A Sh*tstain on the Ass of the Universe, #28: Lie or Liar
0 -
Avril Lavigne Must Be Stopped
0 -
This Dude Sounds EXACTLY Like Layne Staley
0 -
Op-Ed: When Did Slayer Start to Suck?
0 -
David Hasselhoff’s “True Survivor” Music Video Just Broke the Internet
0 -
Twelve Reasons Babymetal are the Single Best Thing to Happen to Metal in the Past Decade