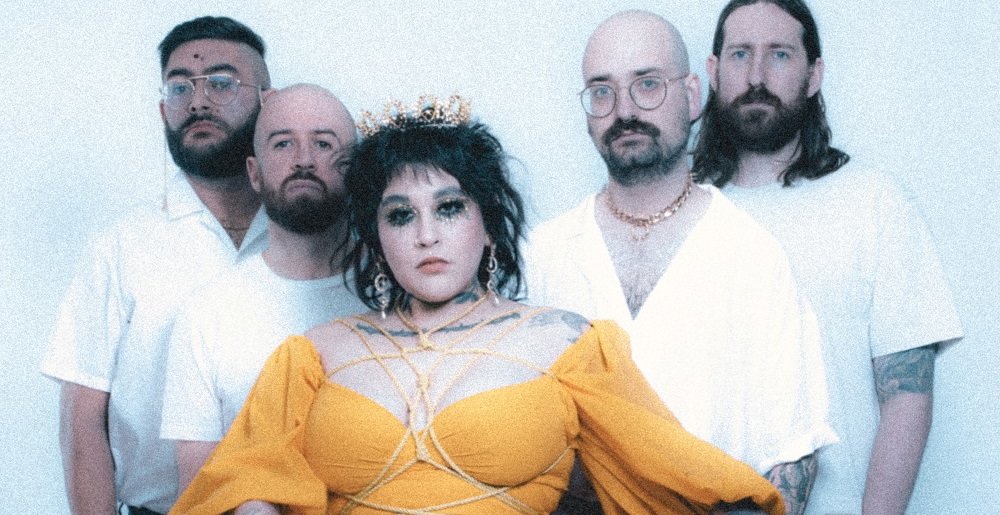 Picture it: July 2022, “post”-pandemic, global world. My first interview for MetalSucks, so I’m hella nervous. Instead of being greeted by an impatient, bearded white dude staring me down via Google Meet, I’m met with the sweet, open gaze of Djamila Boden Azzouz as she sits in her bedroom, ready to spill the tea about the band’s new record.

In the background, I think I spot her iconic orange dress from the new album cover, and for pleasantries, we compliment each other’s aesthetics. Settling happily into the blurred code switching of two queer femmes talking about metal, I smile and inwardly do a little victory dance. This is going to be a good one!

But don’t think that I was fully relaxed. The new Ithaca record, They Fear Us, out now via Hassle Records, seems like it was just waiting for this moment to emerge into the world. Even in 2022, it’s still notable when a band crosses genre lines or has a marginalized member. In the case of Ithaca, the band is made up of queer and brown people who blur genre lines to the point that no one knows whether to call the record hardcore, metal, metalcore, or something else entirely.

And Azzouz, while sweet and inviting, is a formidable vocalist and has a lot to offer about the band’s sound and the state of the world. Here, in no uncertain terms, is what she has to say.

Can you talk a little about the writing and recording process for this album and how it differed from previous records?

Blimey, writing this album was very, very different. There was the pandemic, so we ended up having to write pretty much the entire album remotely, which is not something we’ve ever done before. And I did find that quite hard because I’m one of those people that likes to be in a room with people. Particularly in the U.K., there were so many different rules about who you could see and who you couldn’t see. I think in the space of two years, we saw each other maybe, like, two or three times, which is crazy.

So it was very intense, weirdly distant. I think the occasions where we did get to see each other, we tried to, like, do as much as possible, and it kind of made the process itself way more intense, where usually you would gradually spend time just writing over the space of however long, but this felt more urgent, even though we had plenty of time, since we couldn’t play live or do anything for ages anyway. So, it was totally different.

I think the recording of this album was super different, too. We’ve never spent this long recording before. I think we were away for just over a month recording this album, and I think for the previous album, we did it in, like, five or six days, so this was a much longer process, but it was so fun. It was so amazing to just be able to take time to kind of be creative in the studio and try out all these silly ideas. We were really lucky because our producer was so amazing; he was like, “No idea is a stupid idea. We’ll try out anything you want.”

In terms of musicality and lyrical themes, do you feel like there’s a new direction there? What are some big things that changed or were highlighted?

Absolutely. I think for anyone who has listened to our first full-length album, The Language of Injury, it’s quite obvious that the album is very deeply sad lyrically. It is very, very personal and just really bleak, and there’s a lot of self-loathing on that record. This time, it felt so different. Lyrically, I think there’s a stark contrast and it’s quite obvious. It very much feels like it’s still a very angry album, and there are a lot of quite intense moments of anger, but this time, they’re not directed at myself anymore. They’re directed at everyone else.

That’s definitely a positive change. Musically speaking, how do you think it stands out from the rest?

I find this one so hard to describe, as I feel like it’s a total mindfuck of a record. To anyone who was sort of hoping for Language of Injury part two, they are going to be desperately disappointed because it’s not the same record at all. I feel like it has those big moments of heaviness that people like from the first record, but also more melodic parts, and it’s just a lot more creative. And I think we’ve really allowed ourselves to just get a bit weird and really kind of let ourselves go in regards to what we actually wanted to put on the album.

I think for me and the other guys, there was really a big sense of relief once we kind of stopped giving a fuck about, like, the genre and the scene, and we were just like, “We like what we’re doing, and none of that stuff matters.” I feel like the two years between records was a really good time for us to sit back and be like, “Wow, we’re different people now.” We’re so much more comfortable with ourselves and have had so much personal growth and healing. We were just in a completely different place writing that other record.

When it comes to all your varied influences, from hardcore and punk to old-school melodeath and metalcore, how do all those things fuse together to make your sound?

I think if you took each member of the band and asked for our top five artists on Spotify, our favorite artists and most-listened-to genres, you would get such wildly varied answers. If you did a venn diagram, only a handful of bands would sit in the middle.

I also think we really just didn’t want to make a metal album and be boring. People call us a metal band; that’s fine, but there were just so many other ideas that we wanted to pursue. Like a couple years ago, when the metalcore revival was taking off, and folk were doing things in a new way or putting a new spin on it, and then some, quite brazenly, were kind of carbon copying all of the metalcore bands we grew up with, just pure metalcore worship.

For us, it’s never been about recreating the sound when it comes to metalcore. It’s definitely a big influence, and we can’t run away from that, but we also find it fun to just be experimental and see what we can do with it, keep things a bit unexpected.

When it comes to being yourself, as a woman and a queer person, and writing themes that touch on women’s  and queer issues, what was top of mind? Obviously I know you aren’t U.S.-based, but here in the U.S. with the overturning of Roe v. Wade, and then on a larger scale globally, there’s a lot to unpack. How much of that do you feel went onto the record, and what do you think are some of the most important cultural messages that you’re trying to call out?

I think even the very essence of the record itself, even the title, comes from a very strong sense of just recognizing your own value and your own worth. And really for us in the band as individual people, just recognizing how far we’ve come and letting people know that we’re not afraid to really just unapologetically be who we are.

I think there are a few moments on the album that kind of talk about women’s issues and queer issues, self image, really sort of questioning who you are. In our band, we have queer people and brown people and fat people, and we all have such a big wealth of experience with those issues.

I think the themes are a lot about self-discovery and trying to just figure out where you fit into these groups of people and how you view yourself versus how other people view you and how you’re treated by other people. And I think the reason that is so essential for us is because after being abused and treated badly for so long, we’re realizing we hold the power and now it’s time for sweet payback.

Speaking of fitting or not fitting into groups, how is the scene over there, and how do you feel women and queer people, brown people, and marginalized folks in general fit in to metal and hardcore? What needs to be better, and what is awesome and supportive?

I feel like it’s come a long way in the past 10 years that I’ve been playing in this band, but there’s still so much work to do. Sometimes I feel like a lot of progress is being made, and then you see tokenization and it’s like, “OK, that’s not really progress.” It’s just people wanting to look progressive, and that’s really frustrating.

All you have to do is look at the comments on any of our YouTube video or stories about us, or the comment section on Facebook or whatever if you want to be fucking depressed, because that is a stark reminder, and I think that’s true anywhere. I think it’s really easy to feel like the scene that you’re in is doing well and is really progressive. With punk or hardcore or any of those scenes, it can sometimes be quite insular, and you only hang around with queer people or have a group of friends where everyone is amazing, and sometimes you don’t see what’s really going on.

I think as a band, since we sort of came up in the hardcore scene and the metal scene and the punk scene. We kind of never fit into a specific genre. That made me feel like an outsider but it also enabled me to see across these scenes and how people are treated.

I think it’s important not to lose sight of the bigger picture a bit. Like, maybe your gang of friends is really right on and positive, amazing and understanding, but there’s a group of people on the other side who are not, so it’s just important to keep it all in perspective.

Hey it’s Friday, the new “today” in “Shit That Comes Out Today.” Check out heavy new releases from Sweet Cobra, Immortal Bird, Ambassador Gun, Next To None, Orchid, and more.

Metal Sucks Greatest Hits
0 -
I Watched Rock of Ages so You Don’t Have To
3160 -
Down With The Sickness: God Forbid’s Doc Coyle Takes on Mainstream Metal
0 -
Sean Z.’s Twelve Inch Face Pubes Win the MetalSucks Best Beard in the History of Metal Bracket!!!
0 -
Ex-Attack Attack! Vocalist Caleb Shomo is Smarter than John Holgado
0 -
Navy SEAL Team Six Member: “I Wore My Demon Hunter Patch When I Blasted Osama bin Laden”
0 -
Nazi Imagery: Why Watain and Marduk Don’t Get a Pass While Slayer and Metallica Do