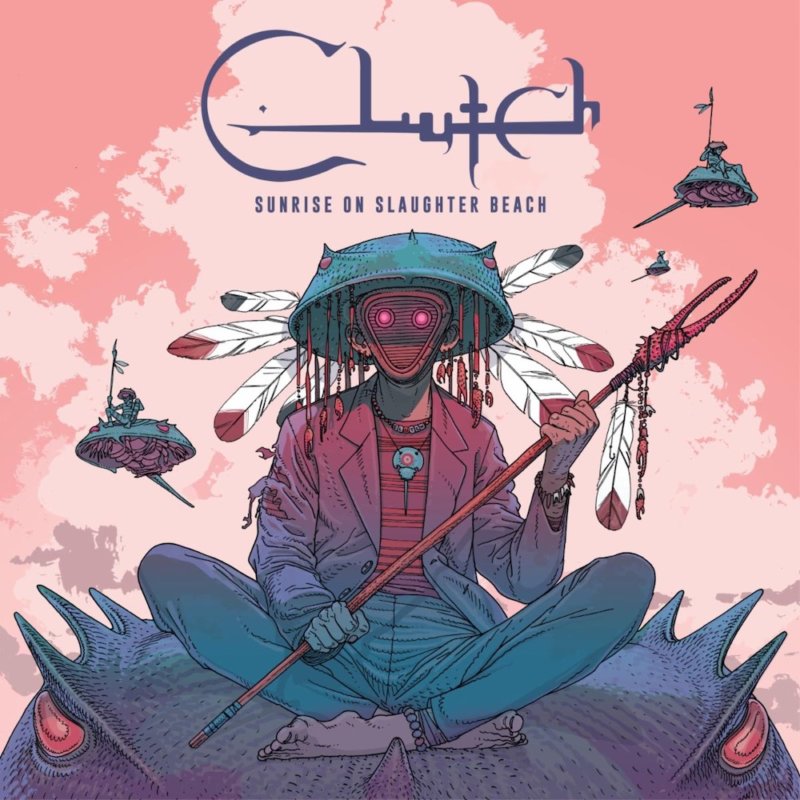 In the world of modern rock, Clutch are an anomaly. While they’ve been successful enough to have their songs land on video game soundtracks and played during major TV shows, their stoner rock-infused tones and indomitable bluesy swagger put them in a league of their own. They’ve made a name for themselves by consistently delivering badass tunes that plug directly into your mind’s stereo and turns the volume to 11.

To that end, Sunrise on Slaughter Beach is your typical Clutch record. It’s an in-your-face rock effort that demands your attention from the get-go. Yet ask any fan and they’ll tell you there’s always a little more going on under the hood of any Clutch offering. And there’s enough to be said about their 12th studio effort that shows just how atypical it can get.

For instance, Sunrise on Slaughter Beach clocks in at just over 33 minutes, making it their shortest album yet and putting it dangerously close into EP territory. And while having such a small runtime may be considered a detriment in some circles, Clutch’s insistence on keeping things tight this time around shows their level of self-awareness as a unit. They still manage to take some liberties with their well-honed style, but do it in such a way that barely any time is wasted.

Speaking of no time wasted, the album kicks off right away with “Red Alert (Boss Metal Zone)” and “Slaughter Beach,” two of the three singles they put out in recent weeks.

As far as album openers go, “Red Alert” feels like your typical rock album opener with a ton of bounce, yet is way more listenable than the guitar effect pedal its name invokes. Meanwhile, “Slaughter Beach” is a catchy track that has a big fat swing to it that adheres to the band’s bluesy undertones. The third single, “We Strive for Excellence” comes in a bit later in the album and is yet another rock banger, though this time it’s playing on the dumb invincibility of youth that most boys with a lot of time and no supervision enjoy.

Of particular note as far as I’m concerned is the track “Mountain of Bone.” As a massive fucking nerd, the song’s use of Dungeons & Dragons tropes to describe what I can only discern as the futility of life and the uncertainty that comes with whether you’ve been a good person or not really speaks to me. Then again, I could be reading far too much into things — that’s the beauty of Neil Fallon’s lyricism. It’s always just relatable enough to introduce you to the weird and wild.

Similarly, “Nosferatu Madre” hangs Fallon’s tale of a witch’s vengeance off of a classic stoner rock riff and soaring chorus.

Leading up to today’s release, much ado was made of the band’s willingness to be a little more experimental with this record. And while Sunrise on Slaughter Beach is certainly full of surprises, the fact that they’ve once again pushed hard on their boundaries shouldn’t really come as a shock to anyone that’s been paying attention.

Songs like “Mercy Brown,” which features wailing female backing vocals for the first time in the band’s discography, builds on a slow, almost mournful southern-fried dirge before going headlong into an instantly singable chorus.

Perhaps the most experimental song came in the form of “Skeletons on Mars,” which is a sci-fi filled track with great, evocative storytelling in Fallon’s words. For most of the song, it’s a pretty standard rock and roller with some trippy, reverb-filled riffs until it gets to the theremin solo. Yes, you read that right — a fucking theremin solo. The song is made complete by a thumping rhythm section that sways like a pair of truck nuts dangling off the back of the Millennium Falcon.

While “Three Golden Horns” feels like the only just okay track on the album, its closer is pretty damn good and a great closer. It’s a slow dirge that’s not unlike “Our Lady of Electric Light” from Psychic Warfare in some aspects. As it marches on, it tells the tale of how time almost always changes how we look at and come to understand our heroes. It’s got a slow, mournful pace and tone that ultimately rings out into silence.

For three decades, the Maryland rock quartet have managed to chisel themselves into the very foundation of rock. Their raucous swagger on display, Clutch have managed to remain consistent without ever feeling stagnant. Sunrise on Slaughter Beach further cements that fact and continues their status as one of rock’s most thought-provoking, fun, and masterful outfits today.

Clutch’s Sunrise on Slaughter Beach is out today, September 16th via Weathermaker Music.