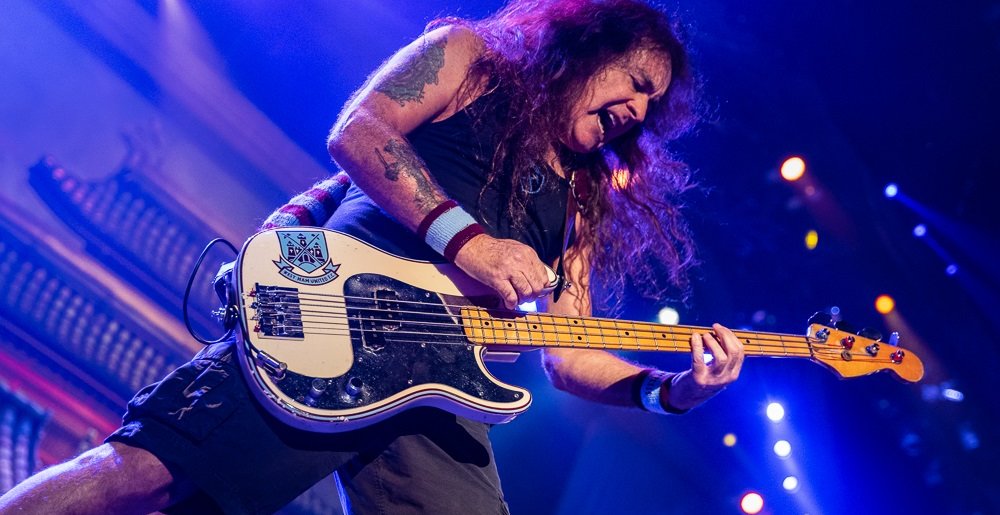 Show Review: Viewing an Iron Maiden and Trivium Show Through a Different Lens

There’s a somewhat magical allure of getting to see one of the greatest and most iconic heavy metal bands live that you can’t get from most of today’s acts. Sure, metal these days moves so fast that there’s always some new act from around the globe vying for your attention, but there’s a special sort of nostalgic build up of excitement and anticipation that comes with seeing undeniable legends.

This past week, my photography gig landed me a chance to see one of those greats up close and personal. This past Tuesday, I got the pleasure of photographing the great Iron Maiden, as well as Trivium, in the heart of the Lone Star state.

While heading out to Austin’s new Moody Center, the number of like-minded metalheads I witnessed walking through the inner city was overbearing at times, like a flowing stream of black shirts.

Armed with my photo pass, I got checked in and after a quick breather, was escorted down to the pit for my first round of photos with Trivium. Looking out across the arena, there was already an absolutely insane amount of people. I’d say a solid 75% of the seats had an filled by an appropriately appointed pair of ass cheeks planted in ’em even though it would still be a while before Maiden took the stage.

Trivium stormed out the gate with “Silence in The Snow,” a strong and heavy song with plenty of low-end to warm the crowd up for the rest of the night. Galloping into the leads of “Into the Mouth of Hell We March,” fans on the floor jumped into the pit’s gnashing maw.

Trivium, with the help of their vocalist Matt Heafy, conducted the crowd’s energy. They made sure to match the crowd’s intensity and connect with the rest of the arena. Meanwhile, the rest of the band maintained a razor sharp focus on delivering an unforgettable performance.

Later on that night, with Maiden just moments away from hitting the stage, I found myself pacing outside the media room, at times reconnecting with familiar faces. Everyone’s excited for what’s about to ensue. Concert-goers rushing to and from concessions, up to their eyeballs with booze and food; practically foaming at the mouth to get back to their assigned seats or spot on the floor.

Right out the gate, metal legends Iron Maiden hit the stage with the primal yet measured song “Senjutsu,” off the album of the same name. It works to bring us all up to speed with the band’s trademark intensity, the first stroke of strings marking what’s about to transpire.

From the very first moment of the show, Adrian Smith, Steve Harris, Dave Murray, and Janick Gers were fully equipped to come into the light and instantly engage with us in the photo pit and everyone else in that arena. Then came the unmistakable voice and acrobatic performance of frontman Bruce Dickinson.

After kicking things off with the primal yet measured “Senjutsu,” Eddie came to do battle with the band, only to be dispatched by the end of “Stratego.” For the rest of the night, Maiden tore through classics and newer songs alike. Following my photo allotment down in the pit, I rushed to the floor to catch the rest of the show, getting back in time for “Signs of the Cross.” Then an elevation change needed, as the band took off with “Flight of Icarus,” a suspended airframe pitching and rolling along with Smith’s guitar solo.

A change in pace came in the form of “Fear of The Dark,” prompting everyone within earshot to begin singing along to words they’ve known for years. That song’s cooling effect only readied the crowd for some of the band’s biggest songs, including “Hallowed Be Thy Name” and “The Number of the Beast,” with blazing columns of fire shooting up at the back of the stage. Bruce even added to the heat index by brandishing a fucking flame thrower on his back and shooting flames out of his hands.

The band’s encore closed out the night with “The Trooper” and “Run to the Hills” before the house lights came on and it was time to call it a night.

At that moments, everywhere I looked was a person I could instantly connect with. The range of life and experience within this huge arena was on display, with all the cheers, the banners, the Eddie get-ups, the headbanging and hoisting of metal horns was enough to get me choked up at points. It was truly one of the most unforgettable nights of music I’ve ever experienced.