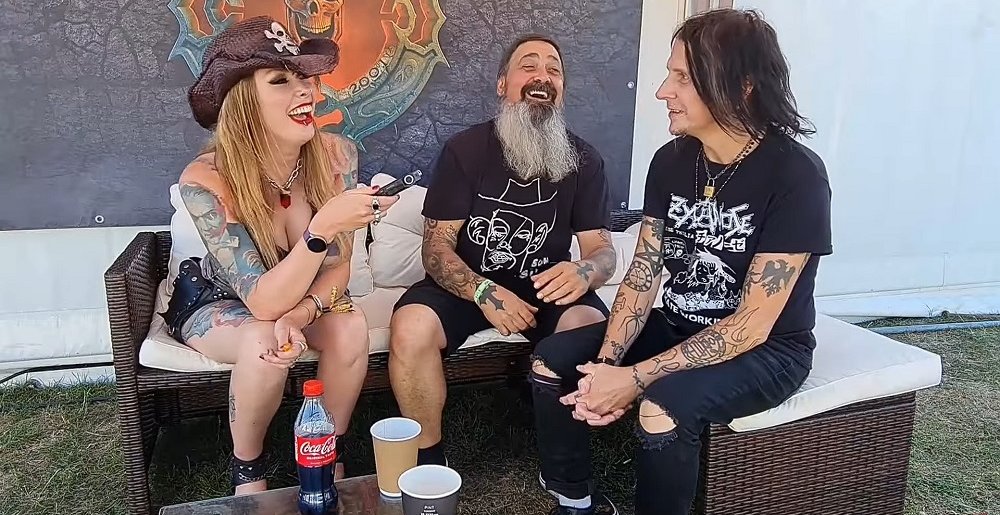 It sure has been pretty quiet on the Pantera front lately, but make no mistake about it — the interest in seeing surviving members Phil Anselmo and Rex Brown take the stage with Zakk Wylde and Charlie Benante in an attempt to faithfully recreate classic Pantera songs is still at a fever pitch.

And even though Billboard reports that both estates of the late Darrel “Dimebag” Lance Abbott and Vinnie Paul Abbott have given their blessing for the four aforementioned musicians’ plans to hit the stage as Pantera next year, people still love to debate whether the actual men would do the same.

Enter EYEHATEGOD‘s Jimmy Bower and Mike IX Williams. While speaking with Hayley Leggs of TotalRock last month during Bloodstock Open Air (as transcribed by Blabbermouth), the two musicians — and noted Phil Anselmo buddies — entered their own two cents into the matter. Bower, who also plays drums for DOWN, kicked things off.

“I think it’s fucking awesome. I think it’s beautiful. I think there’s a lot of fans that have never had a chance to see it, and I think it’s a great way to tribute the band. A hundred percent blessing from me, man.”

Noting that Phil’s a friend, Williams stepped in, saying that the excitement level will be high, even if all of the original members aren’t there.

“Phil’s a friend, so, yeah, I’m happy to see it happen… It’s great. I think it’s great. Everybody’s saying it’s gonna be a little strange without the Abbott brothers, but it is what it is.”

Bower then interjected, agreeing that it will be a little weird, but that he somehow knows the two late Texans would be down for the plan.

Ignoring that if the Abbott brothers were still with us and they were able to squash whatever beef they had with Anselmo at the end of Pantera’s tenure they’d be filling their respective roles, it really is impossible to imagine how they’d react to the news. In fact, it’s easy to think that at least one of the brothers would be adamantly opposed.

During a 2014 interview with German outlet EMP Rock Invasion, Vinnie Paul pretty thoroughly shot down the idea of a Pantera reunion ever being possible without Dimebag in the mix.

“People are selfish, man. They want what they want; they don’t care what you want. And it’s unfortunate that people go, ‘Oh, wow, man, they can get Zakk Wylde to jump up there on stage and it’s Pantera again.’ No, it’s not, you know. It’s not that simple. If Eddie Van Halen was to get shot in the head four times next week, would everybody be going, ‘Hey, man, Zakk, go play for Van Halen. Just call it Van Halen.’ You see what I’m saying? I mean, it’s really selfish for people to think that, and it’s stupid. It’s not right at all.

“They call it a reunion for a reason. It’s called bringing the original members back to what it was. So there’s a lot of these things that they call reunions that aren’t really reunions. They’ve got one dude from the band floating around in them, you know. That’s not a true reunion. With Pantera, it’ll never be possible.”

At the end of the day, who’s to know who’s right and who’s wrong? Maybe by 2022, Vinnie Paul’s feelings on the matter may have softened. Maybe they wouldn’t have. We’ll never know.

But what we do know is this new iteration of Pantera, with Wylde filling in for Dimebag and Benante filling in for Vinnie Paul, will be slated to hit major North American and European festivals, along with some headlining gigs, next year.