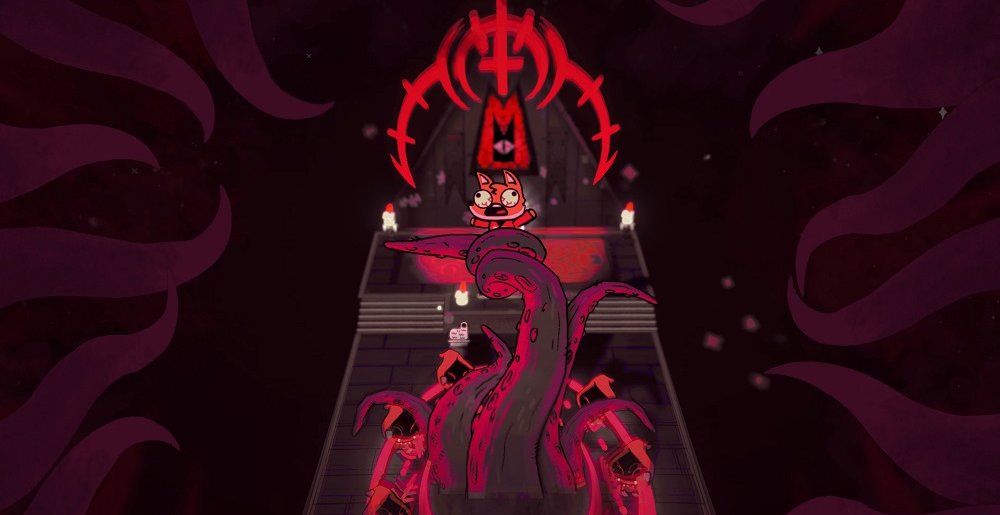 Hallowed Be Thy Game: Cult of the Lamb Makes Running a Satanic Cult Fun and Cute

(Editor’s note: Let’s face it — most metalheads are a buncha nerds. To that end, Hallowed Be Thy Game is a new bi-weekly feature here on MetalSucks where we’ll highlight some of the metal-as-fuck board/video/tabletop role playing games we’re playing or have played in the past.)

The lamb comes up a lot in religious imagery as an embodiment of innocence and purity. Christians literally refer to Jesus Christ as “the lamb” for both his gentle and sacrificial nature. Yet in Cult of the Lamb, a single-player rogue-like game developed by Massive Monster and published by Devolver Digital, our lamb is the exact opposite — he’s vengeance and the devil personified.

In Cult of the Lamb, you play the world’s last remaining lamb. You see, prior to the start of the game, cults worshiping four false prophets murdered your kind to stop a prophecy that warned of a lamb that would slay the prophets before unchaining a disgraced deity known as “The One Who Waits.”

After getting executed in the game’s opening moments, you’re face-to-face with that disgraced god who offers eternal life — but only if you serve him by creating a cult in his name and fulfilling that prophecy. With your only choices being “Yes” and “Absolutely,” you make that dark pact and it’s off to the races. You’re given a demonic one-eyed crown that turns into a weapon, the ability to use magic, and returned to the land of the living to slaughter your enemies.

And slaughter you will. Throughout the game, you have to manage two separate but equally important parts.

One of the driving aspects of the game has you going on rogue-like crusades to kill your enemies, collect resources, and eventually murder the very prophets that oppose you and your master. If you die, you’ll lose a portion of the resources collected and your cult members will begin to see you as a weak-ass punk, losing faith in the process.

That faith is important to the second half of the game, where you run a Jonestown-esque cult in the middle of the woods full of the cute, cuddly followers you’ve indoctrinated. Though your flock serves you and The One Who Waits, you also serve them by meeting their needs. Disregard those needs, let your temple fall into disrepair, or let them starve and you’ll have a revolt on your hands. Therefore, you’ve got to build their shelters, make sure they’re fed, and do all sorts of culty things like hold sermons and take confession. Your followers’ prayers and devotion give you power and help unlock special attacks and new buildings to make life in the cult easier.

You can also trade your clout as the cult leader to set rules and doctrines for your cult to follow. Some of them include things like “it’s totally cool to brutally sacrifice one of your own to The One Who Waits” or “you must let me possess you with a demon to make my crusades easier” or “sometimes The Lamb is going to have to kill you to shut your dissident mouth up.” You know — normal cult shit.

This game is metal as fuck because it’s a story of vengeance that’s rife with satanic imagery. From upside down crosses, to burning red pentagrams on the floor surrounded by hooded cultists, to your own character floating in the air as they deliver their dark sermon with blood running from their eyes. I mean come on — you commit blood sacrifices to appease your dark god.

If this game was around during the PMRC days, Tipper Gore would have shit her britches in anger, fear, or a little of both.

And all this takes place as you walk the Earth as the lamb, surrounded by your adorable flock of feverishly devoted cultists who would (and often do) follow you to their untimely demise. Yes, the lamb is a symbol of peace and love, but Cult of the Lamb has more in common with Baphomet and the goat.

Cult of the Lamb was released on August 11 and is currently available for Windows, macOS, Nintendo Switch, PlayStation 4, PlayStation 5, Xbox One, and Xbox Series X/S.

Sponsored Links from Across the Internet
Show Comments
Related Articles
Grizzly Games 0
You Can Play as Slipknot In the Video Game Smite
May 11th, 2022 at 2:43pm Emperor Rhombus

Who knew these guys had such muscle tone?

Grizzly Games 0
Horror Legend Tom Savini Reveals His Creepy Version of Ash for Evil Dead: The Game
May 11th, 2022 at 10:17am Emperor Rhombus

We assume Rob Zombie will be in some way involved.