Metal Sucks
Metal Sucks Review: Dead Cross Gets Weird, Wild and Raw on II Robert Fripp Asks “Why Should I Give a F*ck”...
- Tweet SHARE
Reviews 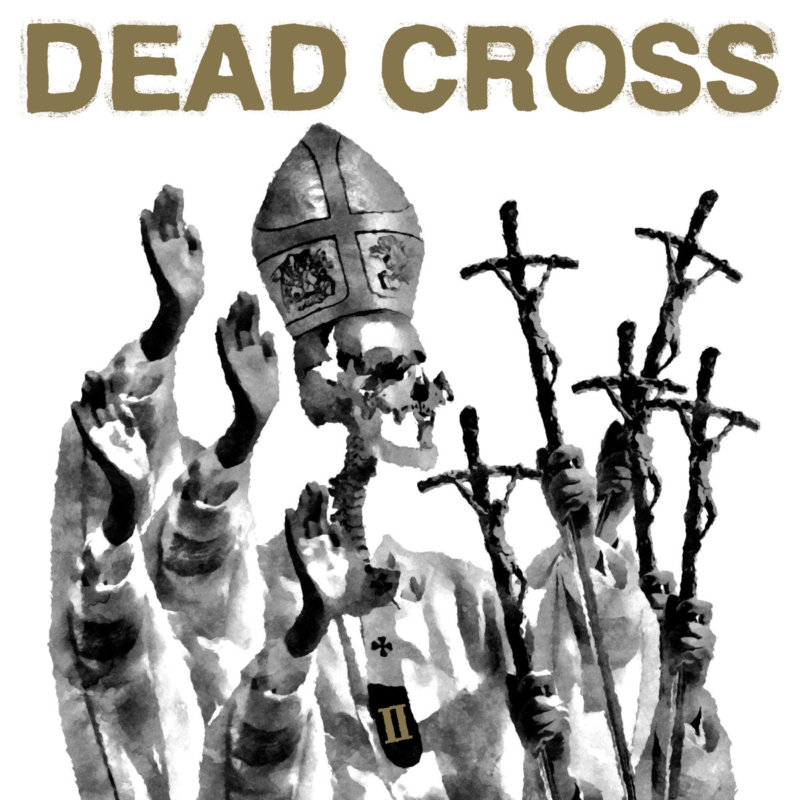 Review: Dead Cross Gets Weird, Wild and Raw on II

Dead Cross is one band where the “supergroup” term feels appropriate. Beyond Mike Patton’s unreal vocal chops and Dave Lombardo’s legendary drumming, the riff-writing chemistry of guitarist Michael Crain and bassist Justin Pearson made their 2017 self-titled debut too much fun to resist. What’s more interesting is watching a band with associations ranging from Slayer and Faith No More to The Locust give their take on hardcore punk. It had to get weird and wild at some point, and that’s exactly what Dead Cross have leaned into on their second outing.

Opening cut “Love Without Love” shows why having Ross Robinson produce Dead Cross is a stroke of genius. From its moody, post-punky meditations to its hair-raising explosion of atonal guitar strains and insane vocalizations, II‘s sound remains immediate and unfiltered—like a train just barely hanging onto the tracks as it gains speed. Robinson’s knack for bringing the crazy out of bands pays off during the lopsided gallops of “Heart Reformer.” The song’s frenetic intensity harks back to the West Coast hardcore underground, but the group revels in psychedelic explorations and spooky atmospheres as much as they do scronky chaos.

But make no mistake, Dead Cross comes through with a barn-burning thrasher when it counts. Even as the longest song on the album, the violent poundings of “Christian Missile Crisis” never relent—and come packed with Patton’s strange sense of humor (lines like “All out of ammo? Act as a dildo” in a Tom Waits-ian drawl comes to mind). His sense of fun carries over onto short bursts of brazen power like “Reign of Error,” as whistle tone screams and melodramatic choruses punctuate Lombardo’s signature rhythmic assault. Crain and Person’s balance of chaotic hammer-on riffs with half-time mosh parts and grating tremolo picking is no laughing matter, but it’s easy to laugh with the band when they embrace their more playful side.

Even in a self-described straight-ahead hardcore project, Dead Cross contains too many creative minds for genre boundaries to contain. The syncopated tom-tom grooves and eerie guitar melodies of “Animal Espionage” might’ve crossed into Hellacopters territory, if it didn’t cascade into an overwhelming wall of sound more on par with noise-rock. This attention to dynamics and atmosphere allows the band to repeat fairly simple ideas without getting boring. This sentiment reaches its peak on the sludge metal/black metal/post-punk connection of “Ants and Dragons.” As filthy bass tones, swirling guitar ambiance and urgent rhythms veer without warning into blast beats and feedback loops, every cook in the kitchen follows their stranger instincts, not just Patton as a frontman.

Actually, this album is one of the best examples of Patton flexing his eccentricity without getting too silly. His animalistic snarls and echoing groans accentuate the jarring time changes of “Strong and Wrong,” but the song would sound plenty unhinged without him. The band revels in letting the stomping two-step breathe just long enough to lull thrash kids into a false sense of security, before thrusting them back into an avalanche of rhythm breaks and brittle dissonance. Even “Nightclub Canary” can’t avoid the experimental debauchery for long. It almost maintains its primitive circle-pitting rage—and really, it would still be enjoyable if it did. But Dead Cross still finds a way to add some processed choirs into the bridge—and of course, a precisely timed solo scream that proves how easily Patton can push his voice past the threshold of sanity.

Like many Ross Robinson-produced records, closing cut “Imposter Syndrome” finds Dead Cross at their darkest and least predictable. It’s like he told the band to take their extremes as far as possible, and the results jerk listeners from borderline-grindcore levels of savagery to minimalistic, almost tribal meditations. For all the disquieting guitar motifs and sensual moanings, the band still comes full circle back to ‘80s mosh fodder.

Dead Cross doesn’t favor one of their aspects over the other. Their straight-ahead hardcore side has just as much heart as their drive to subvert expectations, which accounts for why a second outing doesn’t feel like treading water. When the game plan is repackaging ‘80s underground metal and punk with a healthy appreciation of absurdity, the game isn’t easy to get tired of.

Dead Cross‘ II comes out on October 28 and is currently available for preorder via Ipecac Records.