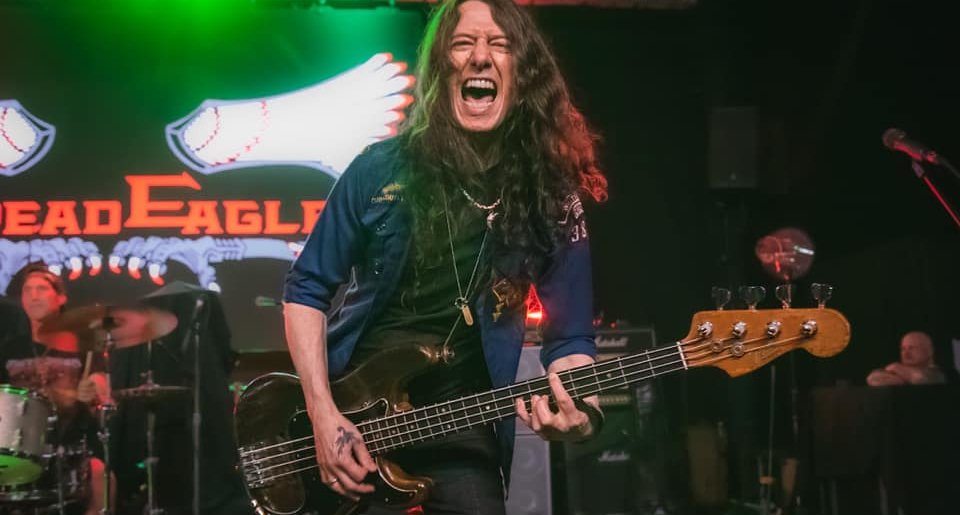 In the early ’90s, Spread Eagle was, in many ways, the east coast’s answer to Guns N’ Roses. Sure, you had Skid Row hailing out of Jersey, but no band harnessed the street-tough grizzle of NYC like Spread Eagle.

Featuring elements of hard living and danger, inherent aggression, and general badassery, 1990’s Spread Eagle was an album for the ages. Its follow-up, Open to the Public (1993), was nearly as bone-crushing. But you can’t tell the story of Spread Eagle with a focus on tough luck, and wrong place, wrong time woulda, shoulda, coulda thinking.

Still, Spread’s bassist Rob De Luca soldiered on, forging a career built on professionalism, consistency, and a hard-fought will to succeed. No matter the challenges, De Luca kicked them in the chest with his leather-booted heel, riding his perseverance to long-term gigs with Sebastian Bach, UFO, and George Lynch.

On the precipice of his next metal-driven adventure, Rob De Luca settled in to give the latest on Spread Eagle, his lessons learned while working with Sebastian Bach and George Lynch, what’s next for UFO, and a whole lot more.

How big of an effect did the Covid-19 pandemic have on the fortunes of Spread Eagle in the wake of Subway to the Stars?

Fortunes! I think that’s the first time I’ve heard Spread Eagle and the word fortunes mentioned in the same sentence! [Laughs]. It was a big blow to many other bands and us. Spread was planning our “coming out” tour after a long period without new music. We released Subway to the Stars, had to deal with the obstacle of switching agents, then scheduled the tour. Shows were slated to start right when COVID hit. I’m sure most musicians have a similar story. Subway to the Stars received the best reviews of our three albums, but we’re still trying to get it even more into public consciousness.

How does the dynamic in Sebastian Bach’s band differ from that in Spread Eagle?

Baz has earned his long career as one of the premier singers from the late ’80s metal era. He never stopped moving. Unfortunately, Spread Eagle didn’t get the necessary breaks to be on that trajectory. Because of that, we’re always trying to prove our worth. Which eventually trickles down to everything involved in our biz. It’s all part of the game.

Both you and Baz have been vocal regarding the use of backing tracks in the live setting. The debate has raged on. Where do you stand today?

The same as always. It’s simply a different form of musical performance than the one I’m involved in. I have no problem at all with bands using backing tracks, as long as they release a statement or print on the ticket that the show is a performance of live music and pre-recorded music.

You were playing with George Lynch for some time. Can you give any insight as to why you chose to move on?

It wasn’t so much about choosing to move on; things happen as they do. UFO had our Last Orders Tour in Europe, which I was confirmed for. The final tour ended up not happening at the last minute, and George already had someone else in place. And since then, I’ve booked a bunch of Spread Eagle gigs.

The current lineup of UFO has been long-running and seems to have a ton of chemistry. What allows it to stand up to the “classic era? Are the rumors of UFO calling it quits true?

Well, Phil is doing well, and he’s getting stronger. I don’t know his plans, but I would love to continue. As for the chemistry, in some ways, it surpasses; in other ways, it stands up, and in some ways, it will never be as good. To explain: UFO was losing consistency in the late ’70s with members not showing up and shows being canceled. The current band is very consistent with an unquestioning belief in Phil Mogg’s long-term vision.

How has working with Baz, UFO, and George Lynch changed you as a bass player?

It’s given me confidence. When I realized that many skills translate to all rock gigs, that was a difference-maker for me. I’ve learned that being cool is the most important skill of all. Another thing I’ve learned is that being away from your loved ones is never fun, but it’s what we “lifers” have chosen. Traveling is the hardest and most exhausting part.

With your time in UFO potentially coming to a close, going forward, how big of a focus will Spread Eagle be?

Very big. We’re going to continue to tour and release new music for as long as we can stand up. I’m excited about it! We’re always moving forward with shows, writing, and promoting online. And we’re actually all heading to a rehearsal as we speak.

Describe the sound of Spread Eagle to new fans and tell us why the band is meaningful, especially here on the east coast.

The east coast is where we’re from, but we’re not necessarily more meaningful on the east coast than anywhere else. It’s just great, driving, aggressive rock. We have our unique voice in the history of hard rock that we continue to maintain and expand on. Our star is still rising 30 years after our debut, and our fans are enjoying this journey with us. When it comes to rock music, we don’t fuck around.

What can you tell me about Spread Eagles’ newest record?

We put our entire souls into Subway To The Stars. I’m incredibly proud of it, and I will always be. We are currently playing six songs from Subway in our live set. And I can guarantee that our follow-up (fourth) album will be as good, if not better.

What’s next for you, Rob?

We’ll keep working on our new album, so stay tuned for that. And Spread Eagle has got a ton of live shows planned over the coming weeks and months. To all our fans and anyone new to the band, be sure to come and check Spread Eagle out if we’re coming to your city. Here are the live dates we have planned now:

Old beefs die hard when it comes to these aging rockers.