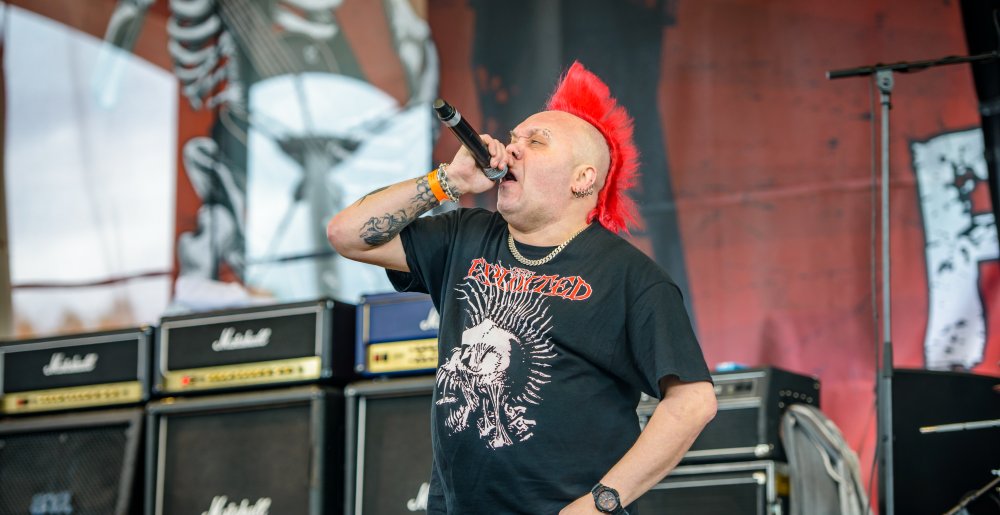 The Exploited frontman Wattie Buchan collapsed on stage following what is believed to be a heart attack on Saturday night, December 10, while performing in Colombia. According to reports, Buchan—who has had more than his fair share of heart problems over the last decade—was singing the song “Army Life” when he fell down.

An official statement from The Exploited’s camp was issued to local news station STV News that confirmed the “suspected heart attack” and notes that fans stayed at the venue until they got an update on Buchan’s health.

“The last gig in Colombia, Wattie had another suspected heart attack. He tried playing on but had to actually stop a couple of songs until he eventually collapsed.

“He got taken away to hospital in an ambulance but over 900 people refused to leave the venue until he heard he was alright.

“The Exploited are held as idols over here, and Wattie is seen as the king of punk. He has kept the punk movement alive when everyone in the press said it was dead.

“He is actually a living legend.”

The remaining Exploited gigs in 2022 are canceled so that Buchan can recover at home. The band’s official statement reads:

“[On] December 10th, 2022 during the end of the set Wattie collapsed on stage in Bogota, COL and was rushed into hospital by ambulance.

“Due to doctor’s orders all remaining shows for 2022 have been cancelled.

“We apologize to the fans, promoters and everyone affected by this situation. Thank you for understanding. Also our London show on the 16th December will also be cancelled once again we are sorry about this but Wattie is exhausted and told to cancel all up coming gigs for this year.”

Buchan had an on-stage heart attack in 2014 in Lisbon, as well as quadruple bypass surgery the same year. The Exploited also canceled shows in 2018 and 2019 due to health concerns.

Metal Sucks Greatest Hits
0 -
The Best Metal Albums of 2013, As Chosen by Metal Musicians Themselves — Part I: Machine Head’s Robb Flynn
0 -
Exclusive Interview: Damien Echols of The West Memphis Three on His Life After Death
0 -
I, For One, Welcome Our New Robot Overlords
220 -
Hey Guys, Did You Know That Virgin Steele are From Long Island?
0 -
King Crimson’s Robert Fripp & Toyah Willcox Cover “Teenage Kicks”
0 -
Detailed Analysis: Vest Metal is Officially the Next Annoying Trend in Metal