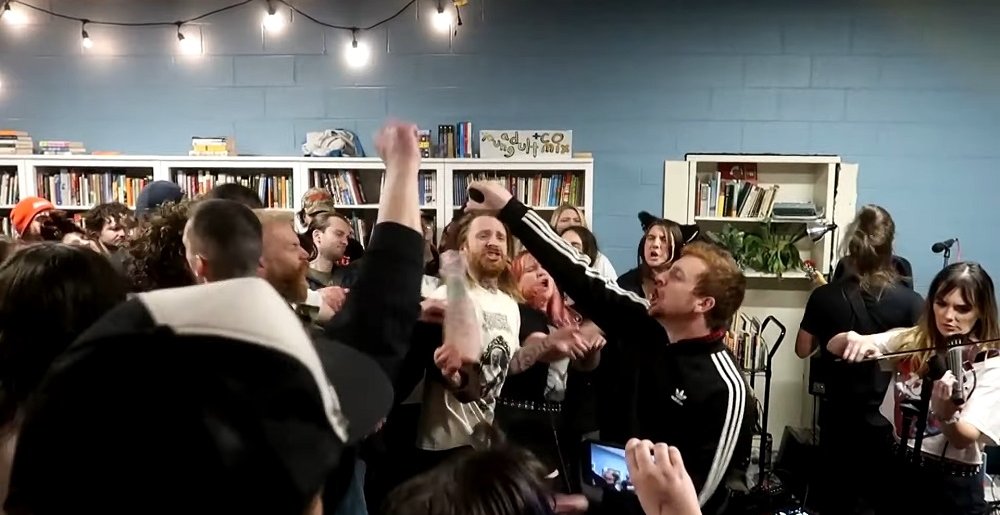 Welcome back to Heavy Rotation! It’s been a minute since we’ve checked in with another artist to see what’s on their playlist but we’ve got a good one for you: The Callous Daoboys, fresh off their announcement that they’ll be joining post-hardcore staples D.R.U.G.S. on tour next year. No surprise: the choices on here are as varied as the unhinged mathcore that defines the band’s sound.

It’s an indie pop whatever you want to call it song and it’s angrier than any heavy band I’ve ever heard.—Maddie Caffrey (Guitar)

This song has a runtime of over 9 minutes and spends it building on strings and lyrics that make me want to cry while the drums gradually become more chaotic and nonsensical.—Maddie Caffrey (Guitar)

This is just the best riff ever written, I think.—Maddie Caffrey (Guitar)

This song has been hitting home for me recently. Some serious bummer lines in there, and all the changes in the way the song develops just twists me up into a million knots.—Carson Pace (Vocals)

I never really heard or listened to Joji until recently, this song was a huge surprise. I love howlLo-fi all the sounds are, and the guitar solo is just so fucking cool.—Carson Pace (Vocals)

I want to put this song at the end of a movie. It just feels like the perfect song to roll the credits to. Makes me cry a lot.—Carson Pace (Vocals)

This song is almost 30 years old and still sounds like it was made in the future. Only Björk could write such a beautiful song about throwing car parts off a cliff to see what sounds they make.—Matt (Drums)

I’m obsessed with this band and try to talk about them any chance I get. Trophy Scars are endlessly creative and this song in particular reminds me of everything from Nick Cave to Fire Walk With Me. Plus they’re from New Jersey.—Matt (Drums)

Worth the 17-year wait. I love when a record just sounds like a band playing in a room. Justin Beck has such a cool style and all these weird noisy riffs. What a band.—Matt (Drums)

Converge – “My Unsaid Everything”

An absolute face-melter from a legendary metalcore band. The song barely gives you any breathing room as it beats you down with frenzied vocals from Jacob Bannon, all while the dizzying riffs accompanying them start and stop on a dime. “My Unsaid Everything” ends with the most ferocious breakdowns ever, cementing it as a classic song from a classic album.—Jackie Buckalew (Bass)

Crying – “Children of the Wind”

This whole album creates a dream-like atmosphere. Shimmering guitars and synths with beautifully-sung vocals, all blending together with pristine production. “Children of the Wind” is an emotional high-point on this record, feeling like the bittersweet ending of a high fantasy story.—Jackie Buckalew (Bass)

Truly in a league of its own, the self-titled track from Massive Attack’s Mezzanine weaves you a soundscape like none other. Trip hop at its finest, this song’s deep basslines and ghostly vocals were made to be played at midnight, driving down a city highway in the pouring rain.—Jackie Buckalew (Bass)

Fever Ray – “What They Call Us”

The revival of Karin Dreijer (of The Knife)’s side project isn’t something I ever thought would happen, but high-school me is losing her mind. I love how minimal-yet-driving the production feels – this single’s been on repeat since it dropped.—Amber Christman (Violin)

I don’t know what else to say other than “I’m so happy this record exists.” The ending always gives me chills. This is another cold-weather listen for me, and just a perfect song overall.—Amber Christman (Violin)

Max Richter’s always been one of my favorite composers. His work is very minimal, and every choice is thoughtful – I love how sparse strings give this piece so much room to breathe. It captures the mood of winter perfectly.—Amber Christman (Violin)

Katzenjammer – “A Bar In Amsterdam”

This song plays every single time I start my car and plug my phone in. Every Daoboy knows what’s up with this song. Get hip.—Dan Hodsdon (Guitar)

I’m forever upset that this album got taken off streaming services. This song is a perfect example of playing the same thing over and over and over, while still building the intensity to a point that’s wildly unexpected.—Dan Hodsdon (Guitar)

Viral Vomit 0
Watch The Callous Daoboys Tear Up a Bookstore with a Deftones Cover
December 5th, 2022 at 1:39pm Hesher Keenan

Heavy metal veteran Leather Leone tells us what’s been in her heavy rotation.

Metal Sucks Greatest Hits
0 -
Editorial: Your Dead Metal Heroes Were No Angels
0 -
Website Photoshops Dogs in Place of Bass Guitars Because Why Not?
0 -
The Top 25 Modern Metal Drummers: The Entire List in One Place
0 -
Converse Rubber Tracks x MetalSucks: Everything All in One Place
0 -
So As it Turns Out, Banging Your Head a Bunch Can Be Bad for Your Brain
0 -
And Now, Here’s a Couple of Dudes Playing Slayer on Pre-School Instruments