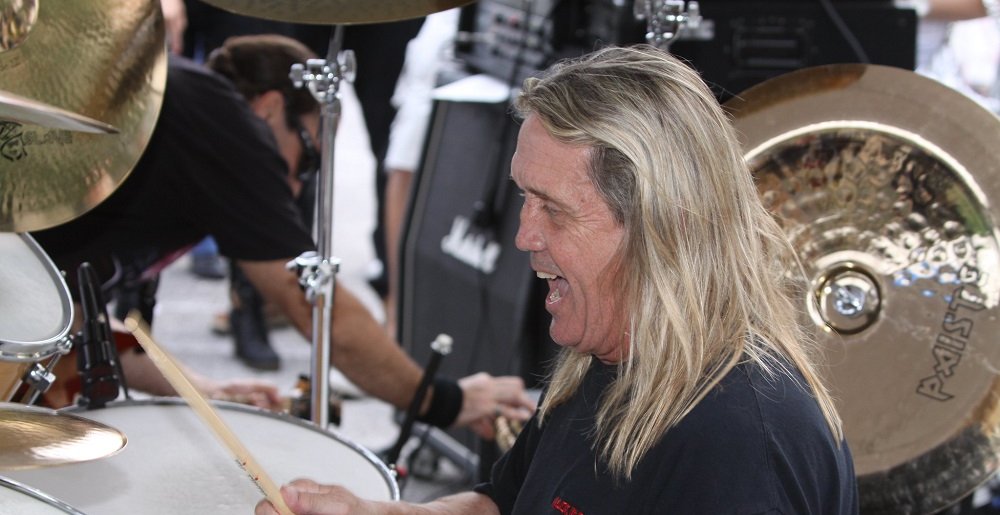 Getting a cancer diagnosis has got to be one of the scariest things in the world. Like, even if it’s benign and easily treatable, it’s a growth that in some essence could have had the capability of planting your ass in the ground. Yet it’s a realization that Nicko McBrain, drummer of Iron Maiden, had to face back in 2020 when he was diagnosed with stage 1 laryngeal cancer.

Since then, he’s had the growth surgically removed and goes in for regular check ins to make sure he’s still fine and the cancer hasn’t returned. In a recent interview for the University of Miami Health System’s website, McBrain described his experience battling cancer, his treatment, and how he learned he had the diesease in the first place.

“When I play drums with the band, I actually sort of scream and yell while I play, like a Judo guy slapping the mat. [But] when you are lying down in a quiet room and you speak and hear your voice in your head and have a cold, you sound different. This happened to me. I thought this is very reminiscent — this different sounding voice of mine — to when I finish a tour or after a show. I didn’t have a cold or any symptoms of illness at all. I started to feel that I was clearing my throat more when I was in conversations. So, I just took it on myself to call my doctor.”

Having caught the cancer early, doctors told McBrain that he’d be able to survive the diagnosis and fully recover. As such, he urged anyone experiencing strange symptoms in their body to go get checked out.

“I thoroughly recommend that anyone who may feel there is something different with their voice to go and get it checked out. And don’t put it off. It was very good for me that I caught it in stage 1.”

Nicko is now the second member to get some form of cancer. Back in 2014, vocalist Bruce Dickinson announced that he had a golf ball-sized tumor on his tongue and another on a lymph node on the side of his neck. After nine weeks of chemo, Dickinson was declared cancer free and cleared to perform again.

Metal Sucks Greatest Hits
300 -
Sebastian Bach: The MetalSucks Interview
0 -
The Red Chord’s Guy Kozowyk is a Police Officer Now
0 -
Give a Heavy Metal Valentine’s Day Card to Someone You Love
0 -
Anthrax’s Frank Bello is Really Excited to Be Here, Not at All Concerned About Swallowing Bugs
0 -
Video: Dudes Rockin’ Out to Van Halen Meet David Lee Roth, Have No Idea Who He Is
0 -
Rigged: Jeff Loomis