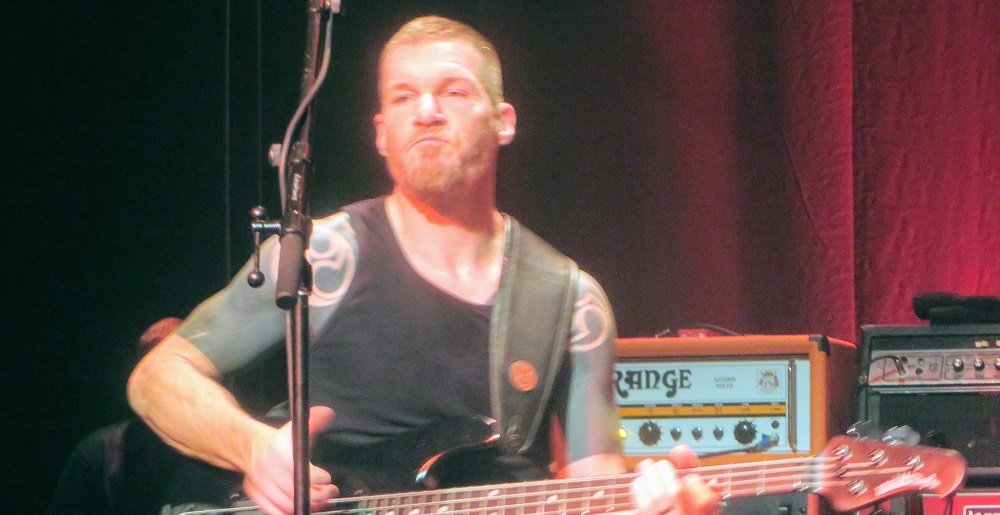 Rage Against the Machine’s Tim Commerford Has Prostate Cancer: “I Should Have Taken It More Seriously”

Man, the guys in Rage Against the Machine haven’t had it easy lately. From leg injuries to forced tour cancellations to today’s news that bassist Tim Commerford has been battling prostate cancer.

In an interview with Spin, the 54-year-old tatted-up bassist revealed that he’d been “dealing with some pretty serious shit” and had his prostate removed just before Rage went on tour earlier this year.

“I went to get life insurance but my PSA (prostate-specific antigen) numbers were up. I couldn’t get it. They wouldn’t insure me. At first, the number was very low — like one-point-something. I watched it over the course of a year and a half, and it kept elevating further. Eventually, they did a biopsy and found out I had cancer, so they took my prostate out. I had been thinking, well, because they’re watching it and let it get to this point, maybe it’s not that big of a deal. I blame myself. I should have said, ‘My numbers are elevated and what does that really mean?’ I should have taken it more seriously.

“Now I’m in the situation that I’m in, which is, hold your breath for six months. It’s not a good one and not one that I’m happy about. I’m just trying to grab a hold of the reins. It’s gonna be a long journey, I hope. My dad died in his early 70s from cancer and my mom died from cancer in her 40s. Split the difference to 65 and I’ve got 10 years. I’m trying to get to the 100-song mark — I have some goals now.”

To reach that 100-song goal, Commerford is putting new music out with his band 7D7D, which released their first single “Capitalism,” which is probably not a glowing endorsement of the economic standard, if I were to venture a guess.

Of particular worry for the bassist when he learned of his diagnosis was whether he would be able to perform at all when Rage went on the “Public Service Announcement Tour.” His doctors, for one, weren’t sure he would.

“Two months before the tour, I had surgery and my doctors said I wasn’t going to be ready. That was brutal. I would be on stage looking at my amp in tears. Then you just kind of turn around and suck it up. Because of Zack’s injury, we had planned these little video interstitials that came in between blocks of songs. We were meant to go on stage, play some songs, go off stage, and on to the interstitials for a few minutes. It was seamless. Then he got hurt and we couldn’t leave the stage. So during the interstitials, we’re just sitting there. That was surreal. I would sometimes sit down and try to not think about certain things. It was weird. I kept it to myself throughout the touring we did and it was brutal.”

For those who don’t know, prostate cancer is a strictly male diagnosis, since women don’t have the gland in the same way men do. (Women have what’s called the Skene gland.) Given its importance in a man’s sexual function and performance, individuals who are diagnosed with prostate cancer often find it hard to talk about. Commerford said that was certainly the case for him.

“Prostate cancer is a very, very, very tough one because it’s connected to your sexuality. It’s hard to disconnect from that and when you’re forced into that situation, it’s a brutal psychological journey. I’ve been trying to find support groups, and it’s hard to find people and hard to talk about it. The suffering part of it, the physical suffering after the surgery, I’ve never felt pain quite like that. I have metal plates in my head and cadaver parts in my body. I’ve done a lot of damage through sports and mountain biking and this sort of thing and I’ve always felt like I had a really high tolerance for pain, and that shit brought me to my knees. After the pain went away, I still haven’t really been able to get up, even though I’m working out and doing shit, but psychologically, the damage is severe. It’s very hard for me to not break down and get emotional.”

Despite the hardship and fear of his diagnosis, Commerford said he was cautiously optimistic about the future. After getting the prostate removed and recovering from that procedure, the bassist said he felt he was on the right track and looking forward to what comes next.

“I just got my six-month test, and it came back at zero. I was like, ‘Fuck yeah!’ That’s the best I can feel for the rest of my life. Every day I get closer to that test is like, ‘Fuck man, is this going to be the time when the number is going to go up and I’m going to the next thing, whatever that is?’ I already went through some pain and shit. And I’m continuing to go through like, some crazy shit.”

We at MetalSucks hope Commerford continues to recover and kick this cancer’s ass.

Sponsored Links from Across the Internet
Show Comments
Related Articles
F*ck Cancer 0
Nightwish’s Floor Jansen Has Breast Cancer, but the “Prognosis is Very Good”
October 26th, 2022 at 9:18am Hesher Keenan

We wish her a complete and speedy recovery.

F*ck Cancer 0
Dave Mustaine on Cancer Diagnosis: “It Doesn’t Have Any Power Over Me Anymore”
August 30th, 2022 at 11:55am Hesher Keenan

Love him or hate him, we’re glad he’s been able to beat cancer.

Metal Sucks Greatest Hits
0 -
David Hasselhoff’s “True Survivor” Music Video Just Broke the Internet
0 -
G.O.A.T. and Your M.O.M.’s “Quack like a Duck” Justifies Humanity’s Entire Existence
0 -
Report: “The Number of Heavy Metal Bands in a Given Country is Associated with its Wealth and Affluence”
0 -
50 Things You Never Knew About George “Corpsegrinder” Fisher’s Neck
0 -
What is the best subgenre of metal?? *please read*
0 -
A Sh*tstain on the Ass of the Universe, #28: Lie or Liar