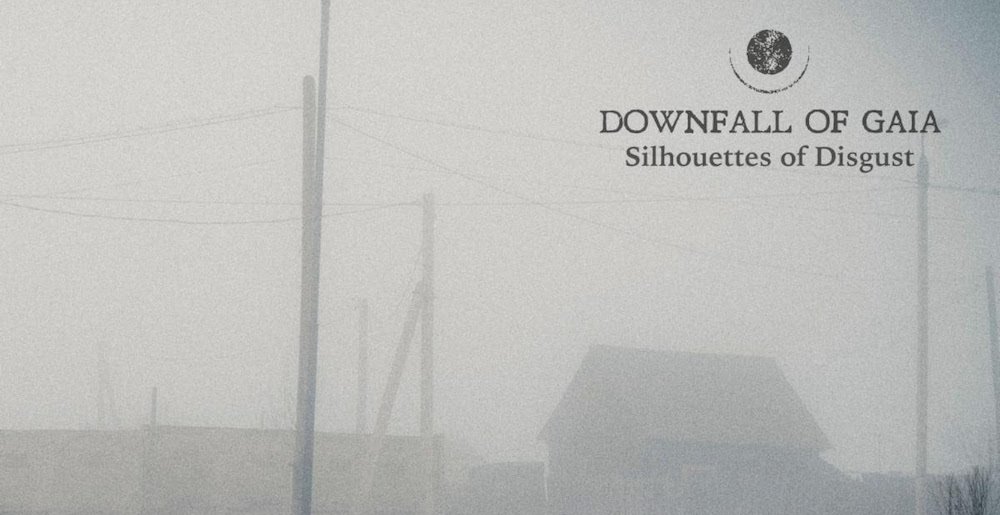 German black metal/crust quartet Downfall of Gaia will release their sixth full-length, Silhouettes of Disgust, on March 17 via longtime label Metal Blade. Silhouettes of Disgust sees the band once again explore the space between crust and expansive post-black metal; it also features shorter song lengths than other recent Downfall of Gaia albums, something the band says they intentionally focused on.

Silhouettes of Disgust is an album centered around the stories of eight fictional people, living in a fictional world with fictional worries. Guitarist and vocalist Dominik Goncalves dos Reis says:

“Loneliness, addiction, the fear of tomorrow, pressure from society/work and others, things that many of us probably know all too well. You have to play along somehow, or you fall through the cracks, and once you’re down, it’s hard to get back up. It looks at selfishness and ignorance, the general way of dealing with each other – you’re one, surrounded by millions, surrounded by all these silhouettes of disgust, surrounded by the things you want to avoid and hate. The last few years have impressively proven what you can expect from humanity, and honestly, it’s not much.”

“‘Bodies As Driftwood’ tells the story of a fictional person in a fictional big city who, under the cover of night, can finally be herself and escape the ever-increasing malaise of everyday life. Hopes and dreams quickly give way to reality and threaten to break down due to outside pressures: Unpaid bills, problems at work, no social network, loneliness, no help, total overwhelm in a constantly accelerating zeitgeist… But at night she feels free – no punishing glances from others, no outside pressure, no stress, no expectations, just herself in the darkness while the world sleeps. Metaphorically speaking, this person uses the darkness of the night as a protective veil. Although this person is surrounded by millions every day, she experiences absolute loneliness on a daily basis.”

Pre-orders are live now in the Metal Blade store. Watch “Bodies as Driftwood” below.

2. The Whir Of Flies

Metal Sucks Greatest Hits
0 -
For $16,000, Ted Nugent Will Stay the F*ck Away From Your Town
0 -
Rigged: Luke Hoskin of Protest The Hero
30 -
Exclusive: Burzum Launches Clothing Line
0 -
Having a Rough Day? Try Hatebreed Motivational Posters!
0 -
BREAKING: Slipknot Guitarist Mick Thomson Stabbed in the Head by Brother
0 -
Video: Dudes Rockin’ Out to Van Halen Meet David Lee Roth, Have No Idea Who He Is