THE CURIOUS CASE OF TREVOR DUNN: A REVIEW OF MADLOVE’S WHITE WITH FOAM 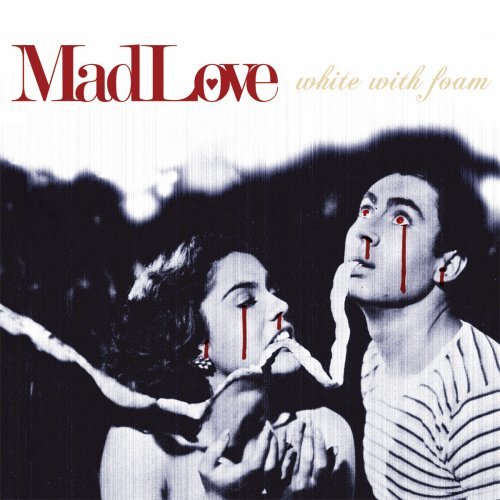 I suspect that, save for the weirdos and closeted avant-jazz heads lurking among our readership, many of you are unaware of or oblivious to the work of Trevor Dunn. Of course, any Mr. Bungle fan will instantly recognize the name of that seminal band’s bassist. Produced by the influential and infamous John Zorn, its 1991 self-titled debut might be one of most bizarre albums in my collection of bizarre albums, blending bombastic hard rock, demented circus music, and freak jazz with thematic wit, irreverence, and depravity. In subsequent years, the Mike Patton-fronted group took a proverbial backseat to the vocalist’s work in the comparatively more successful Faith No More, leaving Dunn and his cohorts to pursue other musical ventures including Secret Chiefs 3. Though Mr. Bungle ultimately and mysteriously disbanded after the release of its third album California, Patton and Dunn would continue their musical partnership in the experimental metal supergroup Fantomas–a still technically active quartet that also includes Melvins’ esteemed axeman Buzz Osbourne and Slayer’s revered drummer Dave Lombardo–as well as the related Fantomas-Melvins Big Band and Zorn’s “Moonchild”. Separately, Dunn has spent much of this decade as a major player in New York’s avant-jazz community, featuring in countless groups and albums including his own Trio-Convulsant. MadLove, however, might be the most extraordinary (and frustrating) release of Dunn’s career given its curious straightforwardness and accessibility.

White With Foam, MadLove’s debut for Patton’s Ipecac Records, sounds like an experimental musician’s attempt at composing a “conventional” rock album. That outsider’s approach made for an unusual final product, an oddity compared to the current crop of indie and commercial rockers. Often, something just seems off or perhaps dated. Admittedly, the foreign, Bjork-esque intonations of lead singer Sunny Kim have a great deal to do with this perceived aloofness, much more than the music. Fairly or unfairly, her voice has a polarizing quality that will potentially leave a negative first impression. Still, even if you happen to be initially turned off by Kim’s almost apathetic vocal delivery, I encourage you to press on nonetheless since the songs are performed so proficiently.

MadLove succeeds most when it’s trying its least to make overtly commercial modern rock. “In Love (In Theory)” nimbly combines Kim’s most emotive, almost falsetto vocals against a quasi-martial beat, creating a beautiful contrast of soft and hard further blurred by the blissful introduction of additional melodic elements later on. Icelandic guitarist Hilmar Jensson plays well on all twelve tracks, though drummer Ches Smith, another jazz veteran, practically steals the show even from Dunn himself. I’m a bit curious as to how long some of these songs have gestated in Dunn’s mind, as “Absence & Noise” and the angular “As Sad As It Was Beautiful” play like revived 90s alt-rock fare, much to the delight of this wistful connoisseur of that decades. When Dunn unexpectedly takes the mic on album highlight “Left With Nothing”, we finally get a glimpse of what MadLove could have been. His slightly nasal voice just feels right amidst the jagged riffs, sharp basslines, frenetic rhythms, evoking a thinking-man’s Foo Fighters. Given that all of MadLove’s songwriting and lyrical credits belong solely to Dunn, it’s astounding – and to the detriment of White With Foam – that he chose not to sing them himself.

[Gary Suarez is America’s Funniest Home Video. He usually manages the consistently off-topic No Yoko No. Say, why don’t you follow him on Twitter?]

As if there was any doubt that Slayer merch is very, very profitable.

Viral Vomit 0
This Slayer/Prince Mash-Up Will Make You Go Crazy
January 11th, 2022 at 10:08am Axl Rosenberg

Cinemetal 0
Members of Protest the Hero, Dream Theater, Haken, etc. Cover Slayer’s “Seasons in the Abyss” for Christmas
December 22nd, 2021 at 9:16am MetalSucks

A Christmas-themed cover of Slayer’s 1990 classic.

Podcast
Voivod’s Michel “Away” Langevin on The MetalSucks Podcast #422

We discuss the band's new album 'Synchro Anarchy,' their recent…

Metal Sucks Greatest Hits
0 -
‘Til Death Do Us Part: Metal + Hard Rock Musicians’ Wedding Portraits
9660 -
…And F**k You, Too.
0 -
The 110% Totally True Confessions of a Left-Wing Conspirator
0 -
Listen to Metallica’s “Nothing Else Matters” in a Major Scale
0 -
David Hasselhoff’s “True Survivor” Music Video Just Broke the Internet
0 -
Footnotes: A Handy Catalog of Every Song from Which Avenged Sevenfold’s Hail to the King “Borrows”