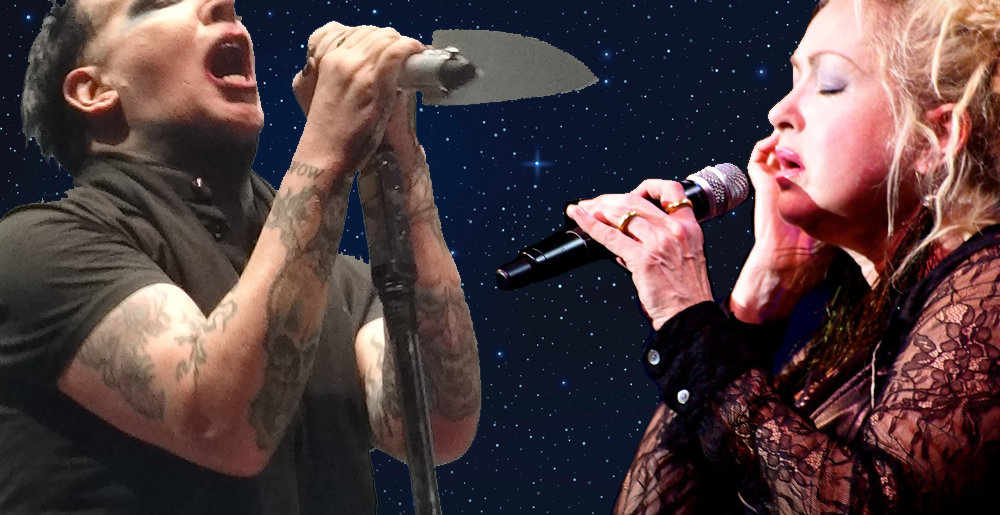 This really hadn’t occurred to me until just now, but I’m willing to bet Cyndi Lauper was a much bigger influence on Marilyn Manson than people realize. Lauper would have been at the height of her fame in the early/mid ’80s, when Manson was a teenager. It’s not difficult to picture an adolescent Brian Warner seeing “The Goonies ‘R’ Good Enough” on MTV and thinking, “Hm, a weird haircut, lots of make-up, and singing about rebelling against your parents? I can TOTALLY do this!”

This being the case, I imagine Manson was more excited than a Norwegian black metal musician at a Christmas morning church burning when he was invited to perform at Lauper’s annual Home for the Holiday charity concert in Los Angeles earlier this week. I mean, I can’t say for sure, because Manson hasn’t emoted since 1999. But I think he seems pleased in the below fan-filmed footage, in which he sings Lauper’s “Girls Just Want to Have Fun,” before the pop singer joins him for a rendition of “The Beautiful People.”

Somewhat more oddly, if no less enjoyable to watch: Lauper also joined Henry Rollins for a cover of Black Flag’s “Rise Above.” I wonder what Rollins circa 1984 would have made of this.

You can watch both videos below. Speaking of Manson: he’ll be opening for Ozzy Osbourne in North America next year. Get dates and tickets here.

Metal Sucks Greatest Hits
0 -
Op-Ed: When Did Slayer Start to Suck?
0 -
Rigged: Jeff Loomis
0 -
Ten Reasons Why Record Labels Are Still Important
0 -
Two Eleven-Year-Olds from Brooklyn Start a Metal Band, Awesomeness Ensues
0 -
For $16,000, Ted Nugent Will Stay the F*ck Away From Your Town
0 -
The Best Metal Albums of 2013, As Chosen by Metal Musicians Themselves — Part I: Machine Head’s Robb Flynn