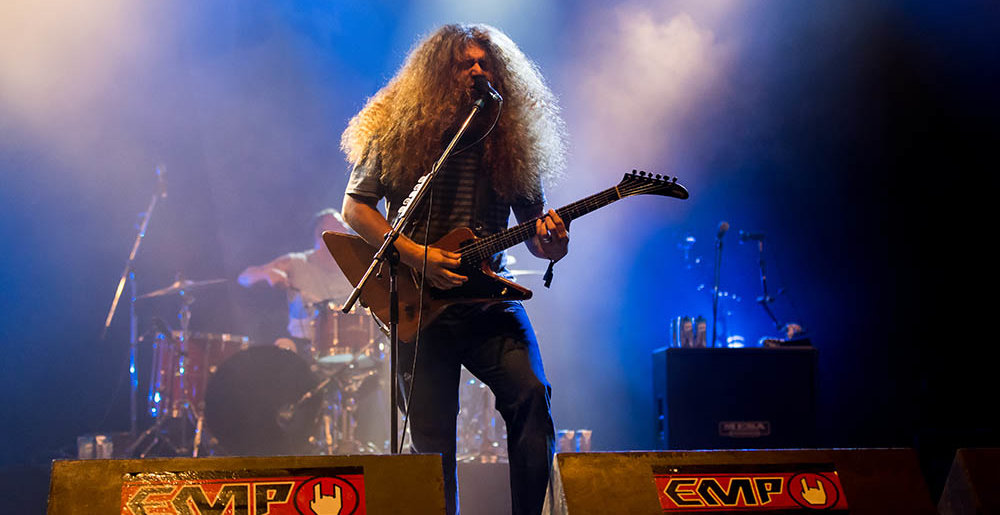 Coheed & Cambria frontman Claudio Sanchez’s singular vision for a complex science fiction story told through the band’s music has guided their career for all except one album, The Color Before the Sun, released in 2015. The band returned to their long-running Amory Wars storyline with their October 2018 release, Vaxis – Act I: The Unheavenly Creatures, and according to Sanchez they’ll be continuing in that vein on their next release.

We caught up with Claudio on The MetalSucks Quarantinecast earlier this week, and while most of the 20-minute chat concerned topics related to the coronavirus pandemic — the current situation in his native New York City, the recent death of his grandfather, the band’s upcoming touring plans, the latest on his reactivated solo project, The Prize Fighter Inferno, etc. — we couldn’t help but ask the status of new Coheed music. To which he replied:

“I’ve got about maybe 75% worth of a record [written]. The concept is pretty much in a lock. I’ve actually started talking with Chase Stone, who did the last album’s art as well as the companion illustrated novel that went with it. So we’ve been slowly talking about some of the conceptual things and maybe we’ll start bringing this part of the story to life.

“Funny, I started this song in September, it was called ‘Hallelujah Quarantine.’ It’s crazy! So in the second part of Vaxis, there’s this criminal organization called The Liar’s Club and they have this thing that sort of travels through the galaxy and they call it The Quarantine, not the actual structure but they have this celebration called The Quarantine. It’s almost like a cotillion where the young come to party and to decide their fates. But this organization is really just taking these young kids to use them as blood banks.

“Thats a very loose part within Vaxis II, this story. Looking at this, I’m like, man, I don’t know if this song is now insensitive for what we’re enduring. Is this even going to be a part of it? Am I going to have to rename this whole sort of thing that’s happening in the story and rewrite this song? I don’t know.

“There are songs. I’m not really all that worried about it. It’s just crazy that I kind of just stumbled upon this tune and I’m like, ‘Aww man. How am I gonna do that one?’”

Sounds like we won’t be hearing Vaxis II until 2021 at the earliest, but it’s still fun to get a peek into Claudio’s plans, always elaborate and well thought out.

Coheed & Cambria’s spring North American tour was postponed on account of the pandemic although no rescheduled dates have been announced. Meanwhile, the second leg, set to take place from late August through early October, is still on sale but very much in limbo. Claudio promised MetalSucks that an announcement regarding the band’s touring plans is coming soon.

Listen to the full Quarantinecast episode chat with Claudio below via either the streaming audio embed or YouTube.

Metal Sucks Greatest Hits
3160 -
Down With The Sickness: God Forbid’s Doc Coyle Takes on Mainstream Metal
9660 -
…And F**k You, Too.
0 -
Why There Will Never Be Another Metal Band as Big as Metallica
0 -
Report: “The Number of Heavy Metal Bands in a Given Country is Associated with its Wealth and Affluence”
0 -
Twenty Photos of Mitch Lucker’s Last Days, Taken From His Instagram Account
0 -
Teenage Environmental Activist Greta Thunberg’s UN Speech Turned into a Swedish Death Metal Song