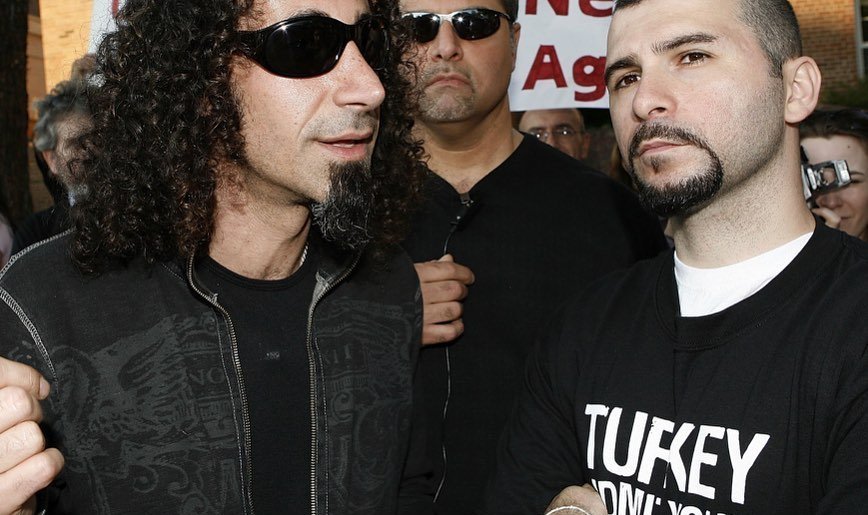 System of a Down frontman Serj Tankian has extended an olive branch to drummer John Dolmayan, who did the same last week, saying he has a tremendous amount of respect for his bandmate, and that “only artists that truly care and are impassioned will risk alienating their base for what they consider the truth.”

The cynic in me would like to point out that Tankian and Dolmayan need to find some way to get along. Not only do their livelihoods depend on one another, but they are brothers in law (their wives are sisters). The mental and linguistic gymnastics people of all kinds and in all sorts of situations utilize to deal with shitty situations knows no bounds.

On the other hand, there’s no question we need more unity and understanding in this current climate of mass division. What’s more, I find Serj’s statement eloquent and classy, and there’s certainly no arguing his point about the band’s united effort to bring attention to the Armenian genocide.

Most recently, Serj praised The Guardian for its recent report on metal’s response to Black Lives Matter, while Dolmayan called out this very website as “fascist” and “billionaire funded.”

“My drummer and brother in law @johndolmayan_ whom I love and respect irrespective of our extremely polarized political commentary and differences has always been my stalwart ally in efforts for recognition of the Armenian genocide within Soad. The amount of online hate and stupidity against him and I are unjustifiable: social media has created an erroneous digital society that partially thrives on this reality. Remember irrespective of the stance, only artists that truly care and are impassioned will risk alienating their base for what they consider the truth. Our dilemma and possible fallacy is that we have two in one band. Some may consider that a weakness but the artistic, political and social dichotomy if not quadrichotomy (not a word) has made @systemofadown what it is today. Thank you all for reading. We should all do more non-online reading :)

Metal Sucks Greatest Hits
1860 -
The Top 25 Modern Metal Guitarists: The Entire List in One Place
0 -
Rigged: Slipknot Percussionist Shawn “Clown” Crahan
3220 -
What is UR Favorite Classic Nu-Metal Band??
0 -
15 Ways Your Unsigned Band is Doing It Wrong
0 -
Video: Jon Bon Jovi Mangles “Livin’ On A Prayer” During Nashville Show Opener
0 -
BREAKING: Some Local Band Called Shrapnel are Tired of You Leaving the Show Before Their Set