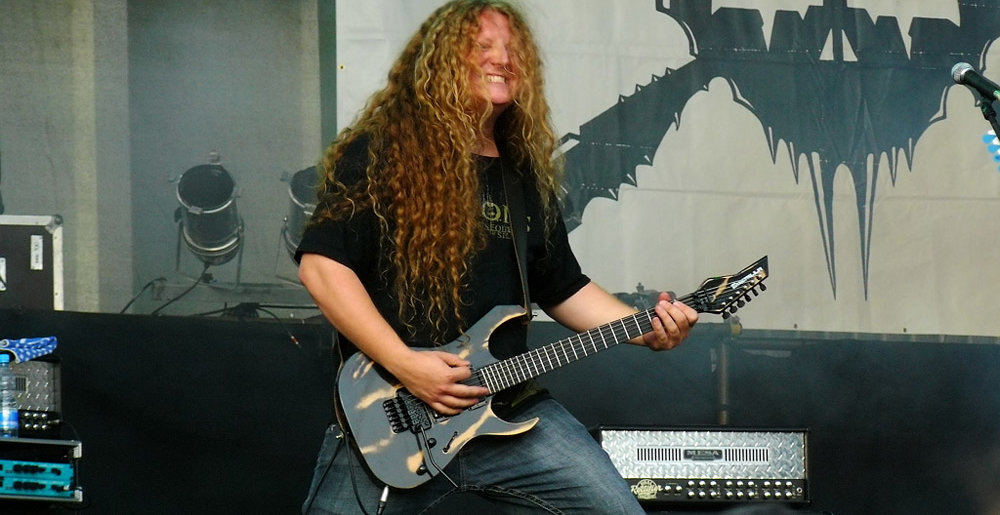 Voivod guitarist Daniel “Chewy” Mongrain joined the latest episode of The MetalSucks Podcast and spoke with us extensively on the role jazz has played in the band’s recent past, including the invitation they received to play last year’s edition of the world renowned Montreal International Jazz Festival and an update on writing sessions for the band’s next record, which are taking place while in quarantine.

On being asked to perform at last year’s Montreal International’s Jazz Festival, and how the band prepared for that show:

“We were invited to play the Montreal International Jazz Festival which was a big surprise for us. Even though we knew the organizers were fans of Voivod, we couldn’t imagine they would challenge themselves to ask a metal band to play a jazz festival. I think it was the last year for one of the organizers to participate in the Jazz Fest and it was one of his dreams to see Voivod at the fest, so they invited us. To me, as a fanboy of the band, so to speak, since I was 11, 12 years old, I think it makes total sense that Voivod plays at a jazz festival because there’s a lot of progressive colors, progressive rock, there’s a lot of contemporary music and there’s indirectly a big jazz influence if you hear the chords and the structure of the band. So I was very pleased and honored that the band was invited there.

What happened is, [we thought] maybe we should do something special for the event to show the people that don’t know the band and will be in the audience that Voivod and metal have a quality and a richness as well as any other genre of music, like jazz or classical. At first I thought maybe we can do a version, like a crooner version of “The Prowl,” a simple song, and I would play a hollow body guitar with clean and we would play with brushes and our bass player would play with a double bass. But it was a little bit far fetched at the time so I thought, maybe I can write an arrangement for brass! It was kind of a fast idea in my head and because it’s a lot of work and I didn’t do that often. I did that when I was at university studying music, but after that, I didn’t do really a lot of arrangement so… but we had like a month or three weeks before rehearsal and I worked my ass off. I really wanted to do it so I started it and I could finish “The End of Dormancy,” which made sense for me because of the choral harmony, the kind of horn quality that there was and the military quality in the song already. So I listened to the song over and over to see where and when interventions of the brass could be without destroying the song and finding the breathing spots that I could exploit and the colors that I wanted to hear. I started pretty fast, I just jumped in the fire and [to see] whatever happens! If it’s bad I’m just going to throw it away and we’re not doing it. But it ended up pretty good and I was really happy with what I did.

“I asked song arrangers, my friends who deal with that kind of stuff very often, if my arrangement made sense [laughs], to have an approval. I went to his place, Javier, he’s a guy from South America but he’s living in Montreal, he’s an arranger, and he helped me with some accents and one or two things, not much really. He approved of it and that gave me a lot of confidence to continue finishing it.

“Then we arrived at the rehearsal and we called some of the top players, trombone and saxophone players in Montreal, some of them were already friends of mine, people I played with in other bands. They arrived at the rehearsal and were very excited to play in a metal band because it never happened to them before and we were really excited to play with them because I have never seen any metal band playing with a brass quintet. I’ve seen a symphonic orchestra, but never a brass quintet, so it was pretty exciting. We did the song two or three times, everything was good. I had to conduct while playing guitar, with my guitar neck [laughs] to count the times and to show the punch and it was really, really cool.

“That was done really for the jazz festival and when we played there people went nuts during that performance. The difference between the video and the live performance that’s also on the EP, in the live performance, we open the section with an improvised saxophone solo. There’s some dynamics going really, really soft during the beginning of the solo and then we kind of raise the intensity as far as the solo goes on and it was really, really cool. People in the audience went totally nuts and it was a total success and we’re really proud of it. And it was fun, good for feeding our creative hearts. It felt amazing.”

An update on the progress of the next Voivod album:

“Yeah, we started a while back, a few months ago. I have a bunch of ideas recorded on my computer and we jammed a few riffs when we had access to the jam space. But [then the coronavirus] happened so I continued to work on new stuff [on my own] and we share files, so that’s the way to go.

You can listen to the full interview here or below.

New Stuff 0
The Robots Continue Their March to Dominance as Voivod Releases an AI-Generated Video for “Quest for Nothing”
October 19th, 2022 at 1:37pm Hesher Keenan