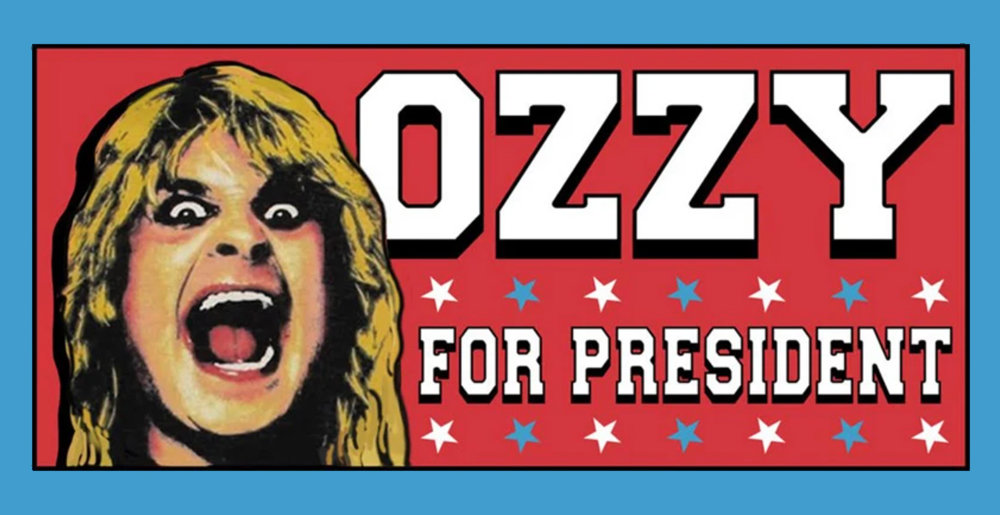 When you think about it, Ozzy Osbourne and Donald Trump actually have some stuff in common. They both…

But they also have some differences, natch. For example…

That last fact hasn’t deterred The Ozzman from releasing a new line of “Ozzy for President” merch. Perhaps recognizing that his best days are behind him, the merch features an image of Ozzy circa Blizzard of Ozz. It ranges in price from $60, for a bundle with a bunch of different shit, to $5, for a bumper sticker and or pin. You can peruse and purchase here.

Ozzy is just the latest metal musician to joke about entering the 2020 presidential race, after Linkin Park’s Mike Shinoda and members of Ghoul and Nekrogoblikon. Expect more musicians to get in on the gag as we get closer to November 3.

Metal Sucks Greatest Hits
9630 -
Fred Durst: Still a Moron
0 -
Let’s Gossip About How Much Money Famous Metal Vocalists Make
9660 -
…And F**k You, Too.
0 -
50 Things You Never Knew About George “Corpsegrinder” Fisher’s Neck
0 -
For $16,000, Ted Nugent Will Stay the F*ck Away From Your Town
0 -
Nazi Imagery: Why Watain and Marduk Don’t Get a Pass While Slayer and Metallica Do