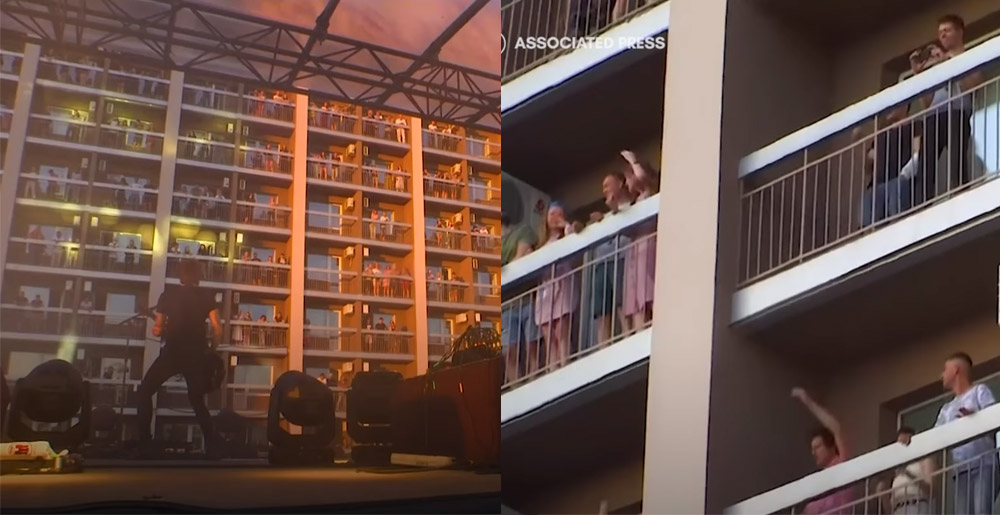 Are “Vertical Concerts” Played to Hotel Balconies the Wave of the Future?

Are “vertical concerts,” in which a band performs outdoors to hundreds of fans dispersed between hotel balconies, the wave of the future?

Probably not, but it sure is an interesting idea, and one that Ukrainian band O.Torvald tested out at a recent live event. Fans of the band bought hotel rooms for the night instead of standard show tickets, then collectively rocked out as the band performed. Up to four fans were allowed on each balcony, where they brought their own drinks and stayed the night.

Some interesting points to mull over here. For starters, the price of a hotel room will be much more than the price of a standard concert ticket for all but the biggest acts, meaning this model might be difficult to apply to the industry at large. On the other hand, splitting a room four ways could really help bring the cost down, as would bringing in your own alcohol. I have some questions about health safety, such as how the hotel handled intake and outtake, whatwith everyone needing to use the same elevators and such, but if concert organizers went to such great lengths to put on this event in the time of corona I have to imagine they considered those issues, too.

Either way, it’s a cool idea, and one that could no doubt be easily applied in a number of different locations across the U.S. It’d also kill two economic birds with one stone, helping both the ailing concert industry and struggling hotels!

For what it’s worth, the event looks like it was a success from the video, which shows a whole bunch of fans losing their minds as the band plays. Watch below.

Metal Sucks Greatest Hits
0 -
France’s Got Talent, too: Beautiful French Girl Performs Heavy Metal Song on TV
0 -
Review: Megadeth’s Super Collider is a Super Catastrophe
0 -
Meet Ironbunny, the New Babymetal
0 -
This Very Fat Cat is The Best at Metal Drums
0 -
Why are metal fans hopelessly stuck in the past??? :(
0 -
A Detailed Analysis of Slipknot’s New Masks