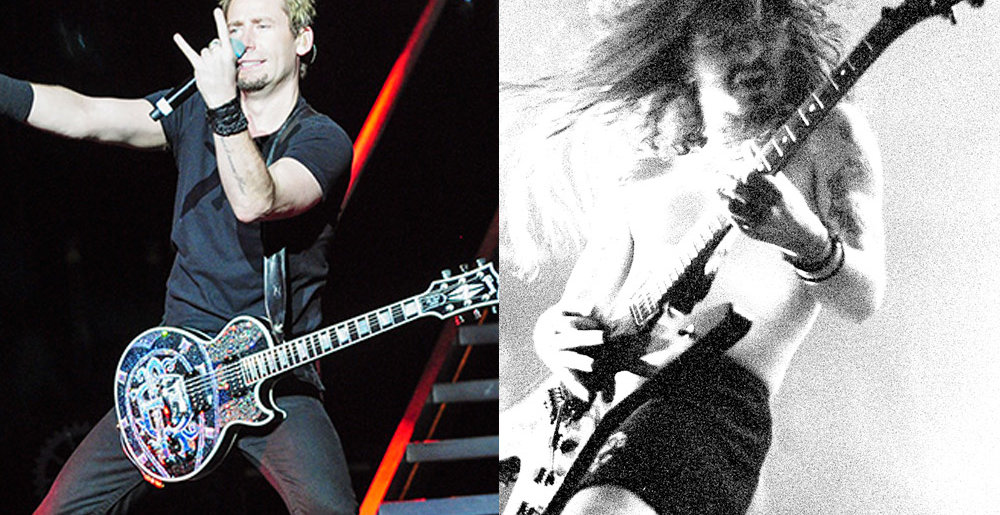 New MetalSucks favorites Nickelback have a long history with Pantera, as difficult as the ‘MURICA FUCK YEAH PANTERA crowd might find that to believe. The band’s 2005 song “Side of a Bullet” was written about Dimebag’s murder, and Chad Kroeger’s friendship with Dime has been the subject of numerous interview questions ever since.

Now, during a appearance on Talkin’ Rock With Meltdown, Nickelback bassist Mike Kroeger (Chad’s brother) — also a legit metalhead — told a story about drinking with the Abbott brothers and his inability to keep up with their alcohol stamina, a familiar refrain we’ve heard from many musicians who partied with the duo over the years:

“Oh yeah, they were closest with Chad because, to be honest with you, Chad was willing to run with them and tried to keep up the alcohol consumption pace, which if you are partying with those guys, you know what that means.

“It’s essentially a death march, and that’s not an exaggeration. I only had the misfortune once of getting mixed up in a ‘party situation’ with them where Dime was bartending, and oh boy… Honestly, I ran away like a coward.

“I got to the point where my legs didn’t work anymore, I couldn’t see, and I just did the Irish goodbye, and I just never came back. I was like, ‘These guys are gonna kill me, man.’

“And they were having a great time too. They had, both brothers — Dime especially — had this magnificent tolerance. They could just drink this stuff like water and they just kept getting funnier and funnier – or maybe I got more and more drunk.

“Then you would start to notice that your motor skills are going, and that’s when they really pull it on to really get you over the finish line, so to speak.

“And I remember reaching that threshold where I was like, ‘This is gonna be bad.’ I was thinking I was gonna make one of their home videos or something, and I got the hell out of there.

“My wife was actually on my bus with the kids and everything, and I would not want to see a video of me getting on that bus and kind of stumbling and crashing into stuff on the way to bed, crawling into the bed with my wife.

“She indicated that I had an odor of a distillery, that I should probably stay on my side of the bed or else I should go sleep someplace else, and it was pretty rough.

“I’m not gonna tell Chad’s story, but let’s just say he reached the target zone that Dimebag and Vinnie were looking for. They finished him off really good.”

Kroeger continued on about how Vinnie was never really the same after Dime’s death, which he relates to as one half of another rock band brother duo. You can read the transcription over at Ultimate Guitar.

Pantera with a side of paradiddles.

Metal Sucks Greatest Hits
0 -
Rigged: Periphery Guitarist Jake Bowen and Front-Of-House Engineer Alex Markides
0 -
Why I’ve Stopped Buying Vinyl
1570 -
Frankie Palmeri’s Track By Track Breakdown of the New Emmure Album: A Track By Track Breakdown
0 -
Anthrax’s Frank Bello is Really Excited to Be Here, Not at All Concerned About Swallowing Bugs
0 -
The 110% Totally True Confessions of a Left-Wing Conspirator
0 -
David Lee Roth on Van Halen Brothers: “We Have Always Hated Each Other”