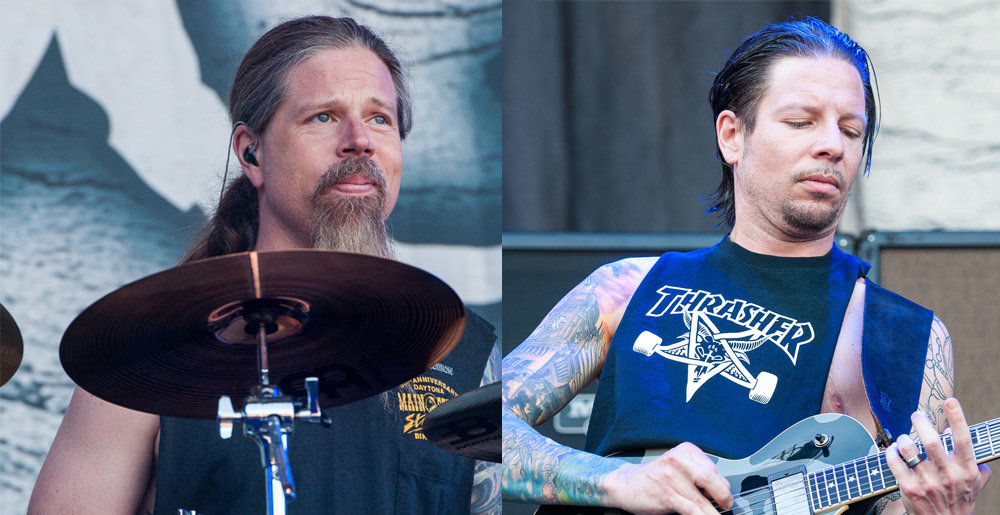 Drummer Chris Adler and Lamb of God parted ways over a year ago now, leaving Lamb of God fans to wonder about the current relationship between Chris and his brother, Willie, who still plays guitar in the band. Both Chris and his former singer, Randy Blythe, have been vague about the details of the split, suggesting it didn’t take place in the most amicable way.

Lambgoat‘s Vanflip Podcast asked Willie about his brother in a recent chat, and the guitarist’s answer is not likely to inspire confidence in those hoping the Adler brothers are looking forward to seeing each other at Christmas dinner this winter.

When asked how his brother is doing, Willie answered:

Yikes. The brothers not being on speaking terms in general would be one thing — troubling, to be sure, but these kinds of family spats do happen — but the complete lack of contact during a friggin’ pandemic is another level. I don’t want to read too much into it, though, based on one brief comment.

Chris, meanwhile, last spoke about his relationship with his brother (and other former bandmates) in an interview last October, and the picture he painted was not a rosy one either.

Asked if things are now “weird” between Willie and himself, Chris replied “yes,” before elaborating:

“[Willie and I have] done it together. I wouldn’t call it a family business, but it’s kind of a cottage industry that we’ve put together, and it’s just unfortunate that we weren’t able to see eye-to-eye on it.”

Asked if he and Willie have managed to remain “friendly” despite this weirdness, Chris said:

“It is. You know, it’s blood. It’s kind of one of those things, and not that this is the case, but with family, there is a level of disrespect that’s somehow tolerated, [where] it wouldn’t be with friends or whatever. And I don’t think there’s any real disrespect going on here in either direction. So, yeah, we’re gonna be fine.”

The drummer was, however, less optimistic about the future of his relationship with the other Lambs of God, Randy Blythe (vocals), Mark Morton (guitar), and John Campbell (bass):

“We’ve spent 26 years in a bus, a train, a plane. There’s not much left to talk about. We’ve explored our friendships to the fullest.”

Lamb of God put out their self-titled new album this summer and have a series of two livestream performances coming up this week and next. Chris, meanwhile, has been busy with Firstborne, a new project with drummer James LoMenzo (ex-Megadeth, ex-Black Label Society, ex-White Lion, etc.), guitarist Hugh Myrone (fucking MYRONE, bruh!) and vocalist Girish Pradhan (Girish and the Chronicles).

Metal Sucks Greatest Hits
0 -
Thirty of the Worst Metal Band Promo Photos of All Time
0 -
Worst Year Ever: All of Our 2012 Year-End Sh*t in One Place
0 -
BREAKING: Slipknot Guitarist Mick Thomson Stabbed in the Head by Brother
0 -
Detailed Analysis: Vest Metal is Officially the Next Annoying Trend in Metal
0 -
Which Bands are “The Big Four of Death Metal”???
0 -
Students at British School Sing Iron Maiden’s “Flight of Icarus”