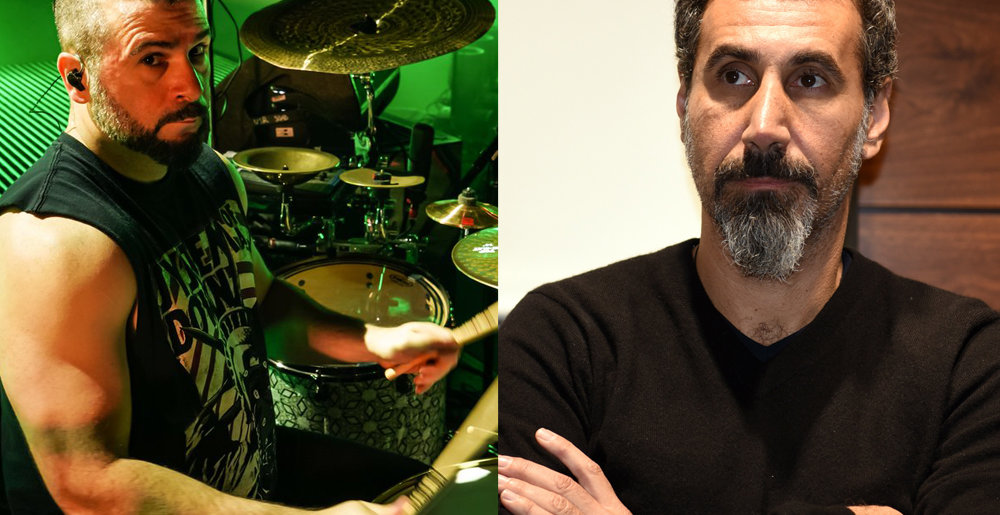 Serj Tankian on John Dolmayan: It’s “Frustrating Being Politically Opposite to Your Own Drummer and Brother-in-Law”

One of 2020’s shittiest revelations — which isn’t exactly a low bar — is that System of a Down drummer John Dolmayan is a Trump-supporting conservative prone to disseminating conspiracy theories and racist misinformation (incidentally, like seemingly 99.5% of all conservatives, he seems confused as to what the First Amendment actually says). This, of course flies directly in the face of the liberal message espoused by System of a Down’s lyrics (and Serj Tankian has all but explicitly agreed). It’s about a half-step away from if we were to learn that a member of Rage Against the Machine voted for Trump.

And I don’t know if it makes it better or worse that Dolmayan didn’t write those lyrics; one way or the other, his creative relationship with them has been symbiotic, so some part of that music’s authenticity now feels at least a little dampened.

But if you think it’s rough to hear Dolmayan go all Fox News as a fan, imagine if he was both your bandmate and your brother-in-law. That’s the position in which Tankian finds himself (he and Dolmayan married sisters); the thing for which he is most well known is directly linked to the dipshit family member most of us only have to see at Thanksgiving.

How does Tankian stomach it? The singer tells Forbes:

“[Dolmayan is] Armenian. He’s my brother-in-law and my drummer. Is it frustrating being politically opposite to your own drummer and brother-in-law? Fuck yeah. Of course it’s frustrating. But that’s having to do with American politics. When it comes to Armenian issues we’re on the same exact page. We know what injustice is happening, we work together. We’re doing different auction activities and working together on many fronts. The Armenian nation is united, whether you voted for Republican, Democrat or neither.

“But, I was a Bernie [Sanders] supporter, I still am. I feel like he still would’ve been the best choice going forward. But I’m okay with Biden. I’m happy that they’ve made that statement. The elections are coming up and normally I’m very vocal, but this war and the daily death toll has really taken up my full spectrum of focus.”

Tankian ain’t just whistlin’ Dixie: in addition to all the work they’ve done to educate the public about the Armenian genocide, earlier this month, System of a Down issued “a collective band statement and call to action on all their social platforms regarding a current crisis occurring in their cultural homeland of Armenia and Artsakh.”

But Tankian’s statement raises all kinds of philosophical issues. Is it weird that he’s willing to turn a blind eye to one set of ideals in order to further another? Is what he’s saying tantamount to “America First!” bullshit? Does it matter? Is he just avoiding conflict? Does he believe what he’s saying? Was most of the statement a deflection, albeit one to put the spotlight on a worthy cause?

I have no idea! I’m gonna think about it for the next twelve or fourteen hours and then we can all meet back here to discuss.

In related news, the world still eagerly awaits new System of a Down music. And by the “the world,” I mean “seemingly everyone but me.” I mean, don’t get me wrong, I’ll take the clicks new SOAD music would produce (I have four kids to feed), but on a personal fandom level, I’m over it. This is like Fear Inoculum all over again, except System of a Down aren’t actively working on anything and one of them is just a few years away from turning into Ted Nugent. I just don’t care anymore.

Metal Sucks Greatest Hits
1510 -
The Top 15 Reasons that Metallica are the Yankees of Metal
0 -
Twenty Hard Rock and Heavy Metal Celebs’ Mugshots
0 -
12 Embarrassing Albums That Everyone Owned Back In The Day
0 -
Rigged: Testament Guitarist Alex Skolnick
0 -
Op-Ed: When Did Slayer Start to Suck?
0 -
MetalSucks Readers Declare Pantera The Most Unnecessarily Shat Upon Band in Metal!!!