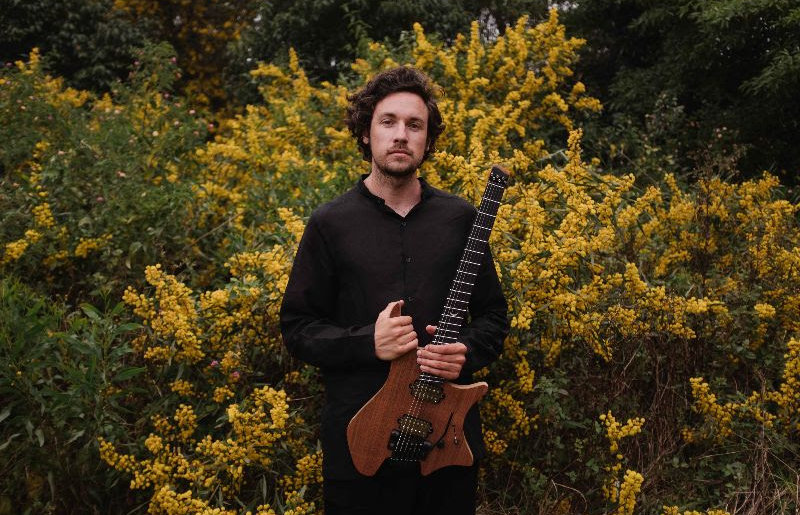 “Papelillo” showcases a groovier, gnarlier side of Plini’s jazz-influenced metal sound than the first single from the new album. I’m almost surely saying this solely because of recent events, but the way he seamlessly blends rhythms and leads, and the style of bends he utilizes, really remind me of Eddie Van Halen’s playing style. This song is like a cross between “Spanked” and “Girl Gone Bad!” Like I said, maybe it’s a stretch, but I’m sticking to it for now.

“The early demos for these songs range from a few months to a few years old, but the majority of the work that went into the album was during the first half of this year. With all travel plans cancelled until further notice, I slowed my lifestyle way down and spent almost every day from March til August wandering around Sydney, listening to podcasts and music, and then coming home and chipping away at these songs.

“It was an extremely fun, rewarding and explorative process – the closest I’ve felt to the free-spiritedness I had when I first started writing music (way before ever releasing it), but informed by everything I’ve learnt and experienced in the last few years of tours and travel. To make an analogy, I feel like I designed a pretty cool house for the listener to inhabit with these songs, but it was made truly special by the masterfully-crafted furnishings and decorations added by Chris, Simon and the rest of the musicians involved.”

Listen to “Papelillo” below. Impulse Voices comes out on November 27 and can be pre-ordered here.

The pop star reached out to the guitarist directly after unknowingly sampling his song in a live MTV performance.

Also includes Rage Against the Machine, System of a Down, Deftones, Megadeth, and more.

The pop star ripped off a whole segment of a Plini song during a performance at the recent MTV European Video Music Awards.

Metal Sucks Greatest Hits
0 -
Worst Year Ever: All of Our 2012 Year-End Sh*t in One Place
0 -
A Detailed Analysis of Slipknot’s New Masks
0 -
Op-Ed: Metal Vocalists Have Become Irrelevant
0 -
The formula 4 good music: Generic, but with a gimmick (*please read*)
0 -
Drummer Mark Castillo Receives Cochlear Implant, Quits Emmure
0 -
What Will Happen When a Member of Metallica Dies?