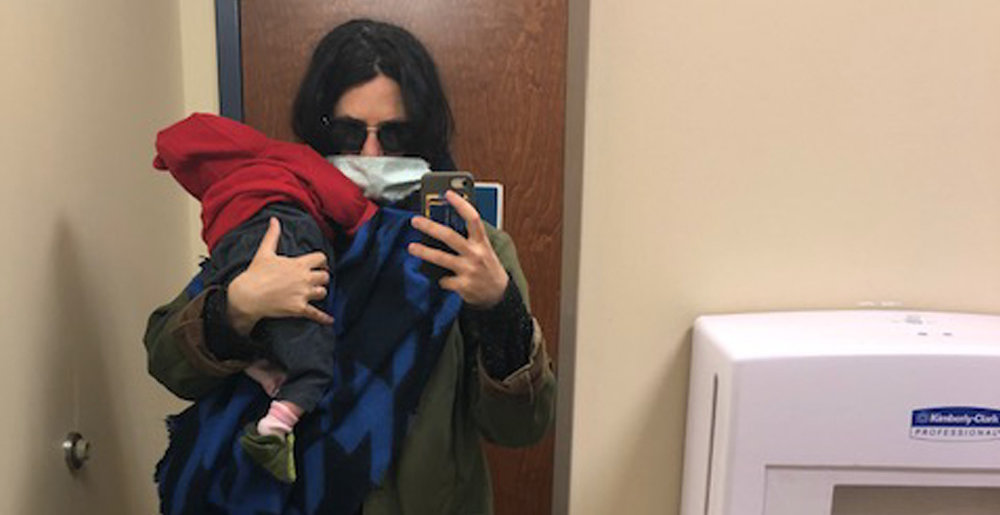 MetalGF’s Top Albums and Artists That Got Her Through 2020

On March 14, 2020 — that same day the world as we know it absolutely collapsed and started to shut down — Vince and I birthed a perfect little baby girl. As I healed in the hospital, I kept getting more and more bleak news. I want to say these were dark times, but I was busy falling so deeply in love with this new gal that it overpowered the reality of the crashing world. Ten days later, still bleeding from birth and having nearly lost our minds, we went to “visit” upstate New York to stay with my mom in my childhood home for help and space. Eight months later, we are still here. From that day in March until present day, like everyone, we have new weird lives. I could never have predicted this in one million years. We are not unhappy, but we are confused. Our lives were turned upside down in both the micro and the macro in a weekend and the recovery process has been long and harrowing.

As we move into December, everything again now is cancelled and closed. There is a deep and tragic loss, a loneliness in every block and building. It feels endless, but it will end. I have waited before with dread in my heart and the end did come. The deep boredom I feel is a luxury. What I would not give to be in a crowded bar, drunkenly talking to dear friends and loose acquaintances.

During early quarantine, freshly postpartum and in a constant low grade panic, I had to listen to music from my past that comforted me. And additionally, it amazed me how new music, new art, and new books kept coming out. I never stopped reading, finishing novel after novel because it was the only true escape. (Would be great if I could write my top ten books of 2020 for my other husband’s literature blog, FictionSucks. His name is Alan.) And music took on a new form, too; instead of listening on the subway on my way to work, I was now listening on cold walks in nature strolling my newborn in a mask or blasting it in the car down country roads to looking desperately for somewhere to swim. Everything is different now.

Here are the albums and artists that got me through 2020, both new and old. I know this is not the traditional format but honestly does anything matter anymore? As I enter my 40th year during a pandemic, having moved back in with my mom with no end in sight I would voice a resounding no.

This is my favorite album of the year! This is a mid-life divorce album about motherhood, infidelity, heartbreak, loss but it is somehow not depressing but uplifting. It’s a woman being real with you, singing her heart out. A lot can happen in one lifetime and it is exhausting and hard and they get that.  The Chicks have been through a lot and so have you, but sometimes things work out okay.

Vince, who I now call ‘T-Bone’ because of his facial hair, is Ashley’s biggest fan and has gotten me completely on board. Listening to her amazing voice and songwriting as we take these windy roads has kept us sane. Turns out country music is very well suited to living in the country. “Girl Goin’ Nowhere” is my favorite song to come out of anywhere or anyone in years. Ashley is an outsider looking in on traditional country music. Yet simultaneously and in just the next  breath, she is the face and sound of new country music. She remains loyal to all the old themes, sometimes with a twist. Ashley has brought us true joy this year and our greatest dream is to see her live one day.

James Taylor (old, though I’ve heard he has a new album)

His voice is like honey and it was so comforting to hear these classics. He’s like a dad singing you to sleep. I love how his lyrics talk about truly consistent things like Massachusetts and winter and friendship, such simple themes that remain constant even when nothing seems the same.

As I woke up early with this new baby and our five year old, feeding them breakfast in my very upstate plaid robe and trying to make sense of the pure monotony of our new lives, these sweet singers gave us a soundtrack to the sun rising.  I’ll never forget spoon feeding our gal sweet potatoes as Elizabeth Mitchell sang “This Land is Your Land” and the fear that rose inside me all of October and early November. Renee and Jeremy are new to me and they are so calming and I recommend them to all parents.

My son and I jammed to “Least Complicated,” screaming the words “what made me think I could start clean slated, the hardest to learn was the least complicated,” letting it all out after months of being locked up in our living room.  I’ve been listening to Emily and Amy sing since I was a young teen and hearing their solid and strong voices helped me be the same.

The grounding voice of Bonnie. Listening to Angel from Montgomery (both her version and the late John Prine’s) while I was feeding my sleepy two week old, genuinely wondering if this was the end of the world and just straight up sobbing was very much my March vibe! Bonnie is timeless and she makes me feel safe somehow, like a loving aunt with a good head on her shoulders.

As Vince and I countdown the days until the CMA Christmas Special, we are coming to realize that we are legitimate fans of country music of all stripes. We love country music and we don’t care who knows it. Maren is one of my favorites and her new album, particularly her new songs “To Hell and Back” and “Better Than We’ve Found it” have quickly become classic quarantine anthems. As I’ve said before, Maren is one of the new guard of country music, modern in her ideas and progressive in her sound and lyrics. Country music is lucky to have her and during this difficult time, we were too.

Ani predicted it all. She wrote about abortion and identity and privilege and consent before anyone I knew did that and she taught me all about them. Her songs and music formed my politics and they are written into me. She is prolific and relentlessly creative. A true, lifelong activist.

Fiona dropped her album Fetch the Bolt Cutters right in the midst of some of our deepest pain. Just as Fiona joined millions of teenage girls in our angst, hurting besides us, she joined us again one month into our virus lifestyle and we hurt beside her once again. It does feel like she is there for us when we need her most, swooping in not to save us but to sit with us and feel it too. She always reminded me of the writer Elizabeth Wurtzel who died in January, kicking off this darkest year. Fiona makes a desperate plea to be loved and it hits me in the heart. It’s so human and raw.

Sometimes, I need to dance in my kitchen or car. I was late in life to Bieber Fever but I did catch it. I find him so incredibly hot and talented. From I’m “Sorry” to “Intentions” to “Holy” to “Lonely,” I love this man. He could turn me Christian at the drop of a hat. He lifts me up! His mental health has been a long time struggle for him and I think we can all understand that. Justin, if you are reading this, I am in love with you! Thanks for everything.

Sponsored Links from Across the Internet
Show Comments
Related Articles
Br00tal-lists 0
Metal Hammer Says These are the 50 Best Metal Albums of 2020
January 9th, 2021 at 11:15am MetalSucks

Metal Sucks Greatest Hits
0 -
Dave Mustaine Mourns the Loss of Twinkies, Endorses Secession
250 -
Worst Year Ever: All of Our 2011 Year-End Sh*t in One Place
0 -
Why I’ve Stopped Buying Vinyl
0 -
Video: A Young Mr. Bungle Play Their High School Talent Show
0 -
Having a Rough Day? Try Hatebreed Motivational Posters!
0 -
Footnotes: A Handy Catalog of Every Song from Which Avenged Sevenfold’s Hail to the King “Borrows”