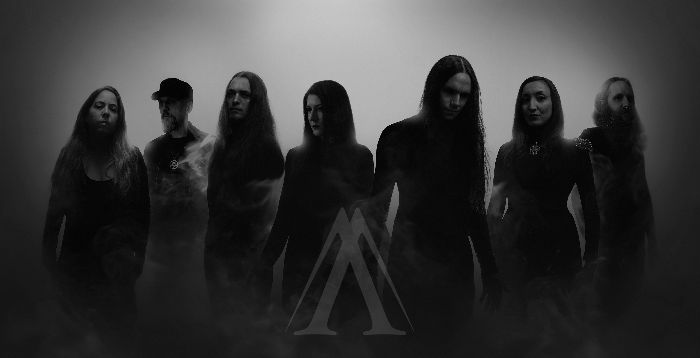 Australian vocalist Xenoyr (Ne Obliviscaris/Omega Infinity) and Canadian Juno nominated composer/pianist/harpist Lindsay Schoolcraft have finally unveiled their new band, Antiqva, which has been in the works since 2015. The group has now released their debut single and video, “Funeral Crown.”

Xenoyr and Schoolcraft have enlisted a talented cast of characters from throughout the metalsphere to help see their vision through. The full lineup:

Xenoyr commented on the single:

“Music from Antiqva has been a long time coming, but like most good things it required patience and maturing. For obvious reasons this year, our individual main projects were delayed and/or unable to tour so we seized the opportunity to focus largely on developing our sound more, and finally through pandemic and isolation, recorded across 5 countries, we now emerge with our debut track, ‘Funeral Crown’.

“In short the song discusses the abuse of power, something we’ve all been exposed to, subjected to or even been a part of, and it paints a picture of the potential consequences. The interest we’ve garnered so far has been overwhelming considering we’re ultimately a brand new band, but we hope this will whet your appetite for what is to come. Thank you to those who’ve followed and supported our journey so far.”

“Funeral Crown” is available now as a limited 12″ with a B-side, “Anadem Gyre.” Order it here.

The tour’s nearly a year out, but that doesn’t mean you can’t begin planning today.

Metal Sucks Greatest Hits
0 -
And Now, Here’s a Couple of Dudes Playing Slayer on Pre-School Instruments
0 -
Joey Jordison Claims He Was Fired from Slipknot Via a Singing Telegram
0 -
Deicide’s Glen Benton Sells Out, Tells Fans to Stop Moshing So Violently
0 -
Science Explains How Metal Singers are Able to Scream Without Damaging Their Vocal Cords
0 -
Will People Please Shut Up About the “Fake Amps on Stage” Debate?
0 -
Review: Megadeth’s Super Collider is a Super Catastrophe