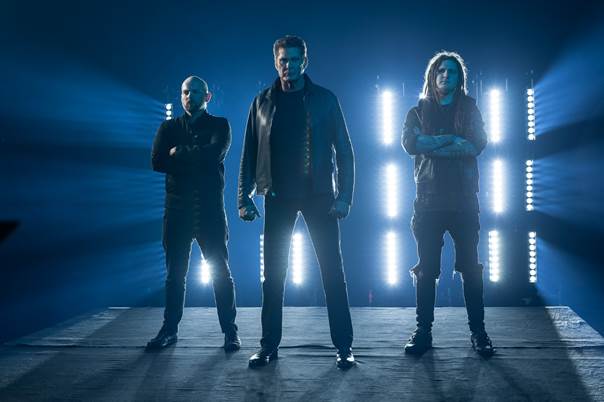 As promised back in October, David Hasselhoff — star of Knight Rider and Baywatch, scourge of cheeseburgers, and dude who once offered me a job running his website which sometimes I think I should have taken because what would that have been like? — has released a metal song.

It’s called “Through the Night” (maybe The Hoff is a Def Leppard fan?). It was created in collaboration with the Australian metal/industrial/electronic duo Cuestack, which one again proves my theory: Australians love David Hasselhoff.

So how is it? It sounds a lot like a European power metal band whose appeal is lost on me but somehow headline Hellfest regardless. So I suspect a lot of you will dig it.

You can check out “Through the Night” via the below music video. If you love it so much it hurts, you’ll be pleased to know that there’s a Through the Night box set featuring “a retro synthwave remix” of the song by Caleb Shomo (Beartooth, ex-Attack Attack!) as well as “a unique poster, gym bag, autograph card and baseball cap.” You can buy that here.

Sponsored Links from Across the Internet
Show Comments
Related Articles
Metal in the Media 0
David Hasselhoff is a Fan of Metallica and Iron Maiden
December 20th, 2020 at 9:46am MetalSucks

His latest release, “Through the Night,” is a metal song in collaboration with Cuestack.

The Hoff is returning with a new metal song and an appropriately epic sci-fi/cyberpunk music video!

Metal Sucks Greatest Hits
0 -
The Best Metal Albums of 2013, As Chosen by Metal Musicians Themselves — Part I: Machine Head’s Robb Flynn
0 -
Video: A Young Mr. Bungle Play Their High School Talent Show
0 -
The Secret 2 a Successful Career in Music
0 -
Dave Mustaine Mourns the Loss of Twinkies, Endorses Secession
0 -
It’s Official: There is Too Much Slayer Merchandise
0 -
Nothing to See Here, Just Some Photos of Cats Wearing Metal Battle Vests