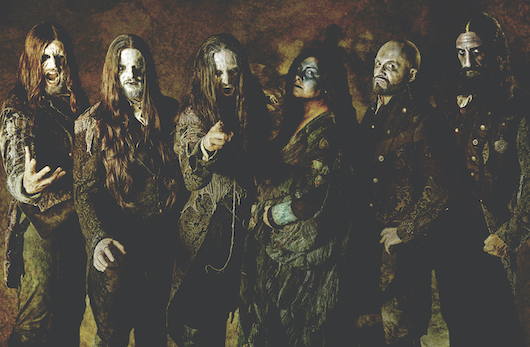 Fleshgod Apocalypse have unveiled a new single called “No” with an accompanying video. Because releasing new music on the Friday before the holiday break begins, when everyone and their mothers, father, sisters and brothers are already completely tuned out for the year, is a MENSA-level idea sure to capture the attention of the masses (how good the music may or may not be is irrelevant). High fives to everyone involved! The seven of you still paying attention to what’s happening in the metal world right now can enjoy it below. It’s very good!

“We live in a world where people are searching for easy answers to complex questions. Self-styled gurus, fake news and miracle pills show up on screen as the silver bullet that may cast out all your fears and troubles. If you need shortcuts to dominate the intricate reality we live in, be aware that the outcome might not be what you expect. Will you find a way to save this world on Google? No. Will things change if we don’t act? No. Will self-delusions lead us somewhere? No. Can music, and art in general, help us cope with this chaos? Absolutely yes.”

Fleshgod recently announced some additions to their full-time lineup, which now features former live-only members Veronica Bordacchini (vocals) and Fabio Bartoletti (guitar), as well as Eugene Ryabchenko on drums (Ryabchenko replaces David Folchitto, who had been with the band since 2017). They unveiled that lineup in October with an acoustic version of “The Day We’ll Be Gone.”

Sponsored Links from Across the Internet
Show Comments
Related Articles
Symphonies of Sickness 0
Fleshgod Apocalypse Frontman Heads Home After a Month in the Hospital
September 22nd, 2021 at 8:32am MetalSucks

The singer/guitarist “is currently stable at a local hospital while receiving treatment for his injuries,” according to the band.

Metal Sucks Greatest Hits
0 -
What If Metal Album Covers Were Truthful?
0 -
I Watched Rock of Ages so You Don’t Have To
0 -
Unearth are the Slayer of Metalcore
850 -
All My Heroes Have Failed Me
0 -
Video: A Young Mr. Bungle Play Their High School Talent Show
0 -
Incredibly Metal Six-Year-Old Girl Terrorizes America’s Got Talent