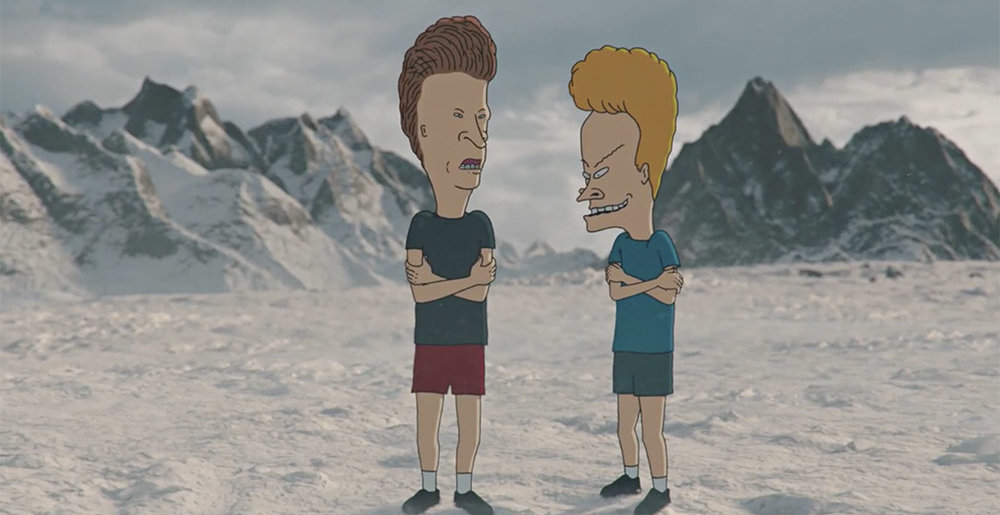 With last night’s Super Bowl Halftime Show performer, The Weeknd, skewing towards a younger pop audience, rock and metal fans had little to look forward to during the broadcast (never mind the NFL’s continued spurning of Metallica for halftime honors).

But metalheads of a certain age got a nice surprise when Beavis & Butt-Head, the titular stars of MTV’s animated show of the same name, appeared in all four commercials for Paramount+, the new streaming service launched by the production company Paramount.

The spots featured several characters from the best known films and TV shows in Paramount’s arsenal all scaling the iconic Paramount mountain together, including SpongeBob Squarepants, Star Trek (with Patrick Stewart in a featured role), CBS This Morning‘s Gayle King, Stephen Colbert, Reno 911, The Teenage Mutant Ninja Turtles, James Corden, Jersey Shore’s Snooki and a number of others.

Beavis and Butt-Head play a bit role in three of the commercials, appearing in the background while muttering a few of their trademark lines. But in a fourth, when one of the characters remarks on a “crack” in the ice atop the mountain, Beavis and Butt-Head take that as a cue to do what they do best.

You can watch all four shorts below, starting with the one in which B&B are featured prominently. Paramount+ launches on Thursday, March 4, and will include news, entertainment and sports from CBS, MTV, Comedy Central, BET, Nickelodeon and Smithsonian Channel.

Beavis and Butt-Head reimagined as viking gods. Part 3 in a series!

One of the great travesties of the Beavis & Butt-Head […]

San Diego Comic-Con, which is currently considered the nerd convention […]