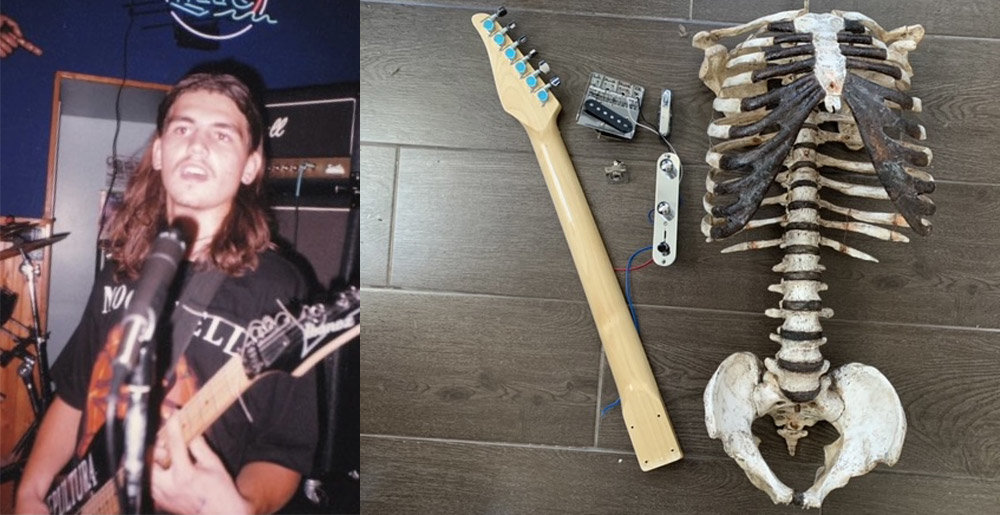 A MetalSucks reader calling himself Prince Midnight has made a guitar out of his dead uncle’s rendered skeleton.

You read that correctly, but if your mind is spinning, I’ll lay it out plainly for you: Prince attached a guitar neck, pickups, volume knobs, a jack, strings and electronics… to an entire skeleton that used to host his uncle’s mortal being.

And he made a functioning guitar out of it all as a way to pay tribute to the man responsible for his love of heavy metal.

Prince isn’t some kind of morbid skeleton fetishist (at least as far as we know), but rather sought to come up with a practical solution on what to do with his uncle’s remains. In Prince’s native Greece, the country’s orthodox religion frowns upon cremation. So his uncle Filip’s bones had been around for over two decades before Prince decided to pay tribute to the man who taught him about the dark arts in the most metal way possible.

For example, essaywriter.nyc considers this case as a great source of investigation for students who study religions, customs and traditions. It can be a topic for hours-long debates and discussions.

Ol’ Filip’s bones got quite a workout between then and now. Filip, who died way too young in a car accident, had requested his skeleton be donated to the local college where it was medically prepared and rendered, fulfilling a workmanlike role of educating students for 20 years. In addition to acting as a science stand this man brought a lot of benefits to medical college students, which can be compared to the benefits of a professional writing service for students in writing medical dissertations or just scientific works.

But at a certain point the school no longer had a use for Filip, so he ended up in a giant wooden box. His family refused to cremate him, but Filip didn’t want to continue paying costly rent for the cemetery space. So he took matters into his own hands, filing, re-filing, and filing again a gauntlet of paperwork with the Greek government to repatriate Filip’s remainsm which Filip tells us was quite a complicated process.

Filip relays to MetalSucks what happened next:

“So, I got the box of bones from Greece and didn’t know what to do at first. Bury them? Cremate them? Put them in the attic? All seemed like poor ways to memorialize someone who got me into heavy metal.

“So, I decided to turn Uncle Filip into a guitar, which proved to be challenging. I did a lot of research and no one has ever made a guitar out of a skeleton. So, I did it. I started out consulting with two guys in Dean Guitars’ wood shop in Tampa but they got cold feet.

“Anyways, now Uncle Filip can shred for all eternity. That’s how he would want it. I’m super proud of the project and how it serves to honor him, his life and his influence on me.

Prince, who just finished assembling the guitar yesterday and sent exclusive photos to MetalSucks, adds that the instrument “Plays perfect and sounds awesome.”

R.I.P. Uncle Filip. You’ve unwittingly inspired a new generation of shredders to pay tribute to their hesher elders in the most metal way possible.

Have a look at several close-up photos of the instrument from throughout the building process below, along with Filip himself (wearing a Moonspell shirt in 1995!) and Prince wielding his remains.

And, as a bonus, Filip has sent us video of the guitar in action — performing Darkthrone’s “Transilvanian Hunger” — both to prove it works and to hear how it sounds. You can have a watch and listen underneath the photos.

Sponsored Links from Across the Internet
Show Comments
Related Articles
Interviews 0
Jackie Parry of Dianthus Dishes on the Rise of Women in the World of Guitar, New Music, and More
January 24th, 2023 at 2:58pm Wolfie von Eyezen

News 0
Billboard Tells Us What We Already Know: Goatwhore’s Latest Album is a Top Release
October 21st, 2022 at 10:15am Hesher Keenan

Metal Sucks Greatest Hits
0 -
Exclusive Interview: Damien Echols of The West Memphis Three on His Life After Death
1230 -
Loutallica’s LuLu: The MetalSucks Reviews
0 -
A Sh*tstain on the Ass of the Universe, #28: Lie or Liar
0 -
What if Black and Death Metal Albums Were Children’s Books?
0 -
Editorial: Your Dead Metal Heroes Were No Angels
0 -
MetalSucks Readers Declare Pantera The Most Unnecessarily Shat Upon Band in Metal!!!