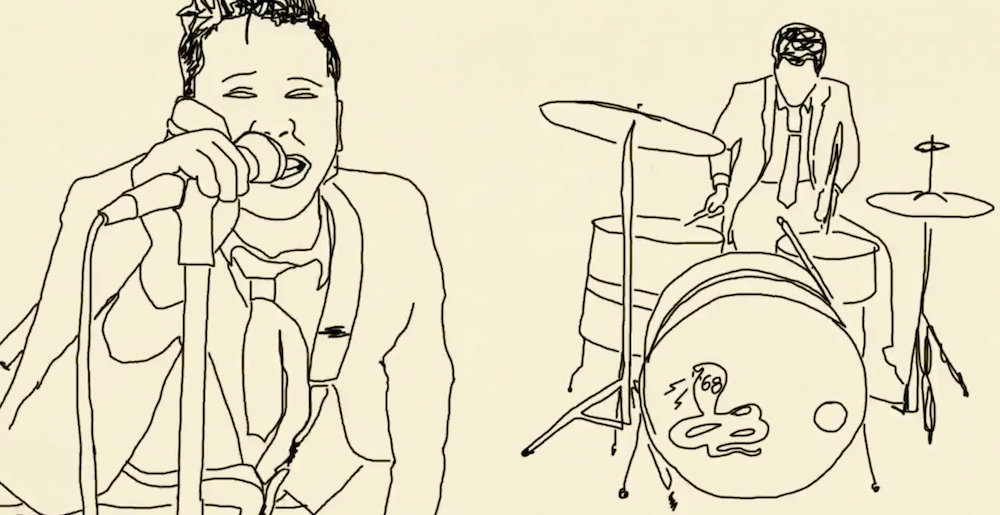 ’68 have released a new single and music video, “Bad Bite.” The song is a killer slice of sweaty, obnoxious noise rock, and I highly recommend it.

But the video is especially noteworthy: according to a press release, “was painstakingly hand-drawn and animated entirely by vocalist and guitarist Josh Scogin (The Chariot, Norma Jean), mixing in subliminal notes from his 2020 experience.” It reportedly took over a year to create. It’s quite crude — which is wholly appropriate for ’68 — but, I mean… shit, even in the midst of a pandemic, who has the patience to do this? Josh Scogin apparently! I applaud his creativity and work ethic.

Says Scogin of the clip:

“The ‘subliminal’ messages are actually what became kind of like a journal for me. A bit of a ‘dear diary’ during the 2020 year of lemons. My computer is old and slow so I had to work on this video in small little, 3 second chunks each so, there was one moment that I assumed it would never actually be released to the public, but I had to finish it because I made a promise to myself a few years back that if I start something, I have to finish it. So anyway, I just started writing whatever I felt at the time (I think at one point I have some Star Wars references because I was making my way through each of those movies), and I also started writing the date on it somewhere each time I worked on it. Once I was basically done with the animation, I put it all together for the first time and bounced it down (it took an entire 24 hours to render it down) and I was so stoked. I knew I wanted it raw, and I wanted my “mistakes” to shine through (to rebuttal how perfect, pristine, and fake everything seems to be these days.). I wanted it to be HUMAN but before I actually placed it all together, I just thought it wasn’t going to actually work. Once I was able to see it all it blew me away. I love it.”

I highly encourage you to check out the fruits of Scogin’s labors below.

“Bad Bite” will appear on ’68’s new album, Give One Take One, due out March 26th via Cooking Vinyl. Pre-order it here.

Support will come from ’68 and Candy.

Support will come from ’68 and Fire From the Gods.

He also reveals how the band’s individual songs develop through playing them live.