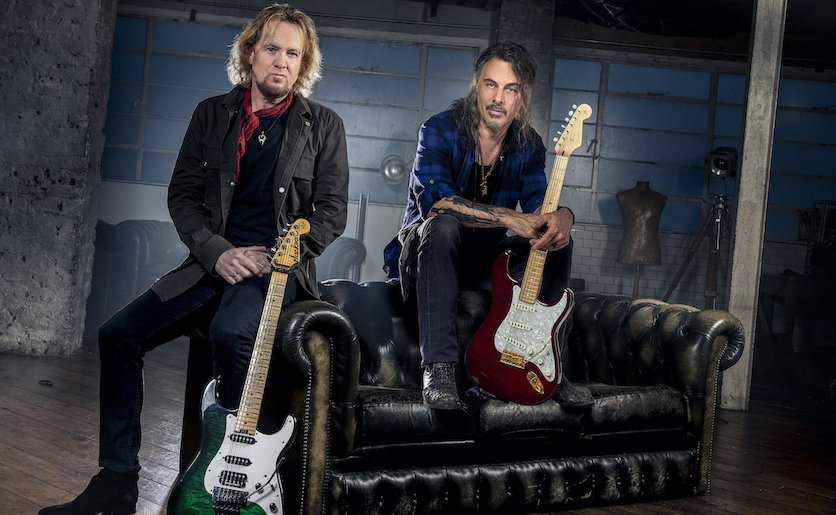 Like the album’s first single, “Taking My Chances,” the new jam is very early ’90s sounding. And like the previous entry, it’s also quite catchy. Unlike that one, though, but appropriate given the cast of characters, this one goes much more heavy on the guitar solos; in addition to a 30-second solo in the middle of the song where such things usually go, the track concludes with 45 seconds of the two shredders trading licks, and is generally sprinkled with lead flourishes throughout. Still, it’s not over the top. And besides, if you’ve made it this far into an article about Adrian Smith and Richie Kotzen you likely already knew what you were signing up for.

Richie explains of the new track:

“I remember ‘Scars’ being one of the songs we wrote in the very beginning of the process. There is something moody and mysterious going on in this track that I find quite engaging. This would be a great track for us to stretch out live for some guitar improvisation between the two of us.”

Check out “Scars” below along with a music video. Smith/Kotzen comes out on March 26; pre-order here.

Sponsored Links from Across the Internet
Show Comments
Related Articles
Cinemetal 0
Video: Current and Ex Members of Iron Maiden and Poison Perform “Wasted Years” at First Ever Concert
January 24th, 2022 at 8:35am MetalSucks

Smith/Kotzen are in the midst of a West Coast tour.

The six-date trek kicks off in January.

Metal Sucks Greatest Hits
0 -
Rammstein Members Kiss During Moscow Show, Violating Russia’s Anti-LGBTQ Laws
0 -
Meet Hatebreed’s Smallest Fan
0 -
What in the Mother of F*CK Did I Just Watch???
0 -
Exclusive Interview: Damien Echols of The West Memphis Three on His Life After Death
0 -
The Single Greatest Analysis of Nickelback’s Work Ever Written
0 -
Twelve Reasons Babymetal are the Single Best Thing to Happen to Metal in the Past Decade