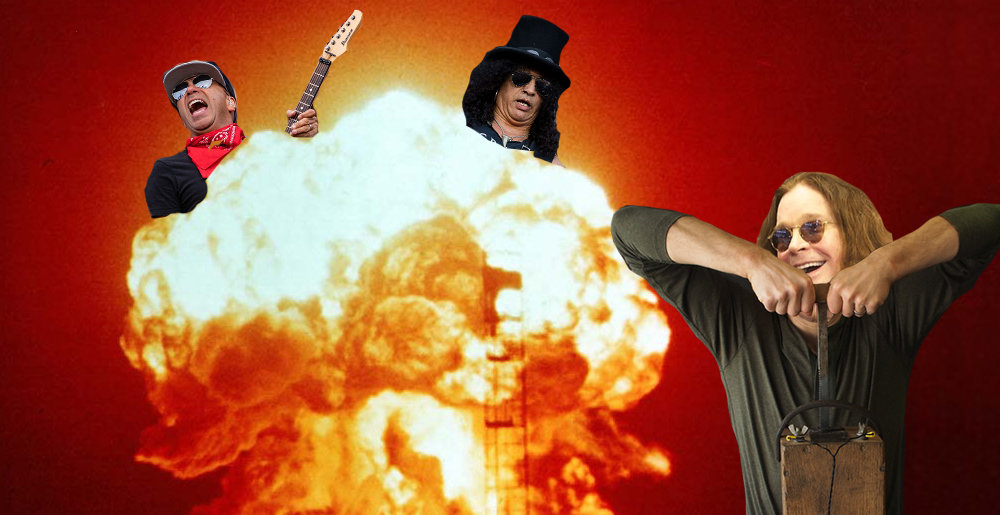 Imagine waking up on November 1, 2015, and reading the headline GUNS N’ ROSES AND RAGE AGAINST THE MACHINE GUITARISTS BLOWN UP BY OZZY OSBOURNE.

That would be arguably the craziest thing to happen in the history of metal, right? Like, it would take a lot to overshadow all the legendary Ozzy stories about biting the heads off of living creatures and licking up Nikki Sixx’s pee and urinating on the Alamo and nearly going all The Shining on poor Sharon Osbourne… but that would easily do it. Forever and all time, that would be the thing for which Ozzy was best known.

It sounds bonkers… but according to Morello, it was moments away from becoming a reality.

The Rage Against the Machine axeman recalled the near-fatal encounter during an interview with Howard Stern yesterday (February 24). He and Slash joined Ozzy at Voodoo Fest New Orleans on October 31, 2015 to help perform the Black Sabbath classics “Iron Man” and “Paranoid.” The first song went off without a hitch, and when it was over, Slash and Morello retreated backstage to wait for “Paranoid.”

That song, according to Morello, was listed on the setlist as encore, to be played after Ozzy’s solo classic, “Mama I’m Coming Home.” Morello says he and Slash were advised that Ozzy never actually played “Mama I’m Coming Home,” though, so they should be ready to take the stage beforehand.

Then this happened (transcription by MetalSucks):

“Slash and I walk out there, and Ozzy goes, ‘The next song’s called ‘Mama I’m Coming Home’ — a song we don’t know how to play.

“So we kinda like slink around to the back of the stage. Now we’re behind the amplifiers, sitting there waiting for him to play the song.

“There’s this guy, this crew guy, at the side of the stage gesticulating wildly. Like, he’s apoplectic. I can’t hear him because it’s super loud… but he’s trying to convey what is clearly a very important message to us.”

Despite the fact that they clearly couldn’t hear him, the crew guy kept trying to shout and signal to them rather than cross the stage to speak with them — Morello thought because he’d been given strict instructions not to cross the stage while Ozzy was performing.

“So finally you can tell he can’t stand it. He runs over and he says, ‘You’re sitting on the pyro!’”

To hear Morello tell it, had he and Slash remained where they were, they likely both would have been killed only moments later:

“I’m like, ‘Bro, next time me and Slash are sitting on the pyro, you might just wanna come right over and let us know that.’”

You can watch Morello recount the story below, along with with videos taken from that performance.