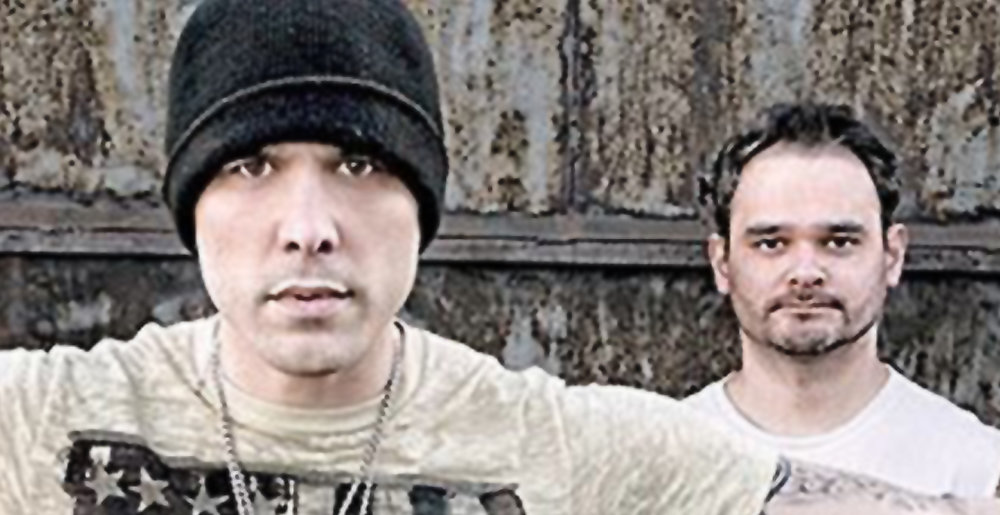 Atreyu’s Travis Miguel Looks Back on Time Spent in Trapt

When Trapt frontman Chris Taylor Brown outed himself as just, like, the WORST last year, a lot of the media coverage of the event included this one promo photo from a few years back:

And those two or maybe even three people were correct. That is, indeed, Travis Miguel, guitar player for Atreyu.

Miguel was part of Trapt in 2013/2014, I assume because he was either dead broke or he owed someone a favor or he was in the middle of the world’s longest, most torturous game of “Truth or Dare” and he’d chosen “dare.” He never recorded anything with the band, and if they were more relevant and had more than three readily-available promo photos, chances are no one would even remember his brief tenure with the group.

Despite his former association with Trapt, Miguel has remained quiet while Brown has gone out of his way to paradoxically remind the world about his band whilst ruining whatever career he has left… until now!

The BREWtally Speaking Podcast recently interviewed Miguel, and, yes, they did indeed ask him about his time in Trapt. Some highlights of that chat follow.

On that promo photo being used everywhere:

“Yeah, I mean, I’d rather that they didn’t use the photo with me, but that’s out of my hands, so you know what can I do?

“But for the most part people know that, like, I don’t have any ties to that band. I was never even really officially in the band, I just acted as the touring guitarist for like a year, year and a half. And I have seen some posts or comments, where people have mentioned, basically to the effect of, I bet Travis’s stoked he’s not part of that show anymore.

“I’m pretty confident that people know that I don’t have the same political stance as Chris Taylor from that band. So, yeah, I mean, like you said, I’m so far removed from it right now, and I’m pretty sure most people realize that.”

On the consequences of his association with Trapt:

“I got off pretty scot free thank God, and I’m very thankful and fortunate for that. But you know… I don’t regret having spent time filling in on guitar for that band at all, I mean, I got paid to play guitar.”

On being a hired gun for the first time:

“There was definitely a bit of a learning curve for me because probably prior to that the only band I had really ever toured with was Atreyu, and when you go from one camp to another the dynamics are completely different.

“The overall situation is different. I was the only guitar player for about 90% of the set. So that was something I had to get used to, because I was so used to looking over to my right and seeing Dan [Jacobs, Atreyu co-guitarist] over there.

“So, you know, just the songs themselves, I kind of went into it a little bit too confident because I wasn’t very familiar with Trapt’s catalog, other than like their big songs or their big singles that they had at the time.

“So I had to learn all these songs and I figured, well, you know, it’s just basic radio rock, how hard can it be? [But] there’s actually a lot of weird nuances and stuff that I had to adjust to and get used to. And I’m actually thankful for that because It made me a better guitar player and a better musician. And it also, in turn, made me a better touring musician.

“What I mean by that is, it forced me to adapt to new personalities, new situations. A new fanbase because their fans had no idea who I was, I was just some new guy on guitar. So yeah, I mean it was definitely a learning experience for sure and I, you know, like I said I don’t regret it.”

One whether or not he’d still take the job today:

“But then again, that being said, this was before the whole, I guess if you want to call it a meltdown or whatever it was. Had that happened, had I been asked to join after said meltdown, I probably would have steered clear from it. But things panned out the way they did, and I came out unscathed. So, yeah, I’m stoked.”

You can listen to the entire interview below.

Atreyu will release a new album, Baptize, on June 4 via Spinefarm. You can listen to the singles “Warrior” and “Underrated” here.

Trapt released a new record, Shadow Work, this past June. It sold 600 copies in its very week of release. Some people will tell you it sold more, but it did not.

Worst Week Ever 0
Vince Neil Tries to Hack It Live, Andrew W.K. Deletes His Social Media Accounts, and More Stories You May Have Missed This Week
October 8th, 2021 at 5:00pm MetalSucks