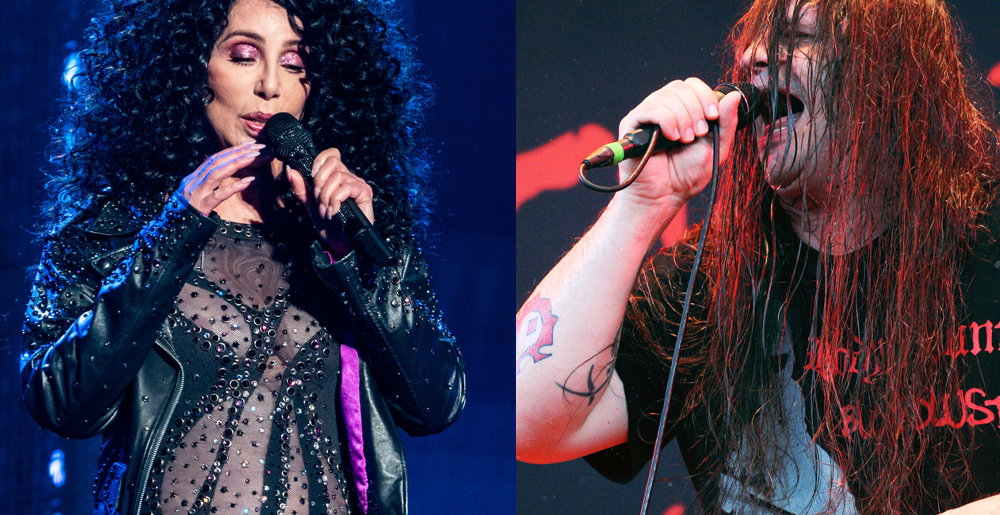 That Time Corpsegrinder Hung Out With Cher

In a new interview with Metal Hammer, the legendary death metal band’s beloved frontman, George “Corpsegrinder” Fisher, reveals that he once hung out with Cher.

How the fuck did that happen, you ask? Corpsegrinder explains:

“Cher’s son Elijah, who is in the band Deadsy, is a big Cannibal Corpse fan and maybe 15 or 20 years ago he wanted us to come out to LA and play his birthday party at the Viper Room. His birthday is two days after mine, so my wife and I went out a few days early: ‘Let’s just fly out there, hang around for a few days, then we’ll play the show.’

“The day before the show, Elijah invited us up to Cher’s house. When we got there, she wasn’t there – she was out shopping. I was like, ‘Yeah, of course Cher’s out shopping.’ But I didn’t know that she came back. I was talking to Elijah, and my wife starts hitting me on the arm. I go, ‘What?’ And she just whispers: ‘Cher!’ I’m like, ‘Ok, that’s cool, but it’s not like meeting King Diamond or Chuck Billy’, cos I’m in awe of those guys.

“She was super-nice. We’re there and Cher is making food for us, and stuff. She came to the show as well. I apologized to her for having to listen to Cannibal Corpse, but she was, like, ‘No, I liked it.’ I’m, like, ‘Come on Cher, do the metal sign.’ And she goes, ‘Honey, I was metal before you were born.’ I’m, like, ‘Damn – I just got owned by Cher!’”

Fun fact: Cher dated Gene Simmons in the late 70s/early 80s. Simmons, of course, takes (wrongfully) takes credit for “the metal sign.” So, in her mind at least, she probably was metal before Corpsegrinder was born (or at least before he was a teenager; he would have been about nine when she and Simmons first hooked up).

Speaking of Elijah Blue and Deadsy: that band is apparently getting back together. Gross.

Metal Sucks Greatest Hits
0 -
The Top 25 Modern Metal Frontmen: The Entire List in One Place
0 -
Rigged: Testament Guitarist Alex Skolnick
0 -
And Now, Here’s a Couple of Dudes Playing Slayer on Pre-School Instruments
0 -
Watch This Kid Perform Europe’s “The Final Countdown” Entirely with Hand-Farts
0 -
The 110% Totally True Confessions of a Left-Wing Conspirator
930 -
The Austerity Program’s Justin Foley and the Search for the GREATEST TACO RIFF OF ALL TIME