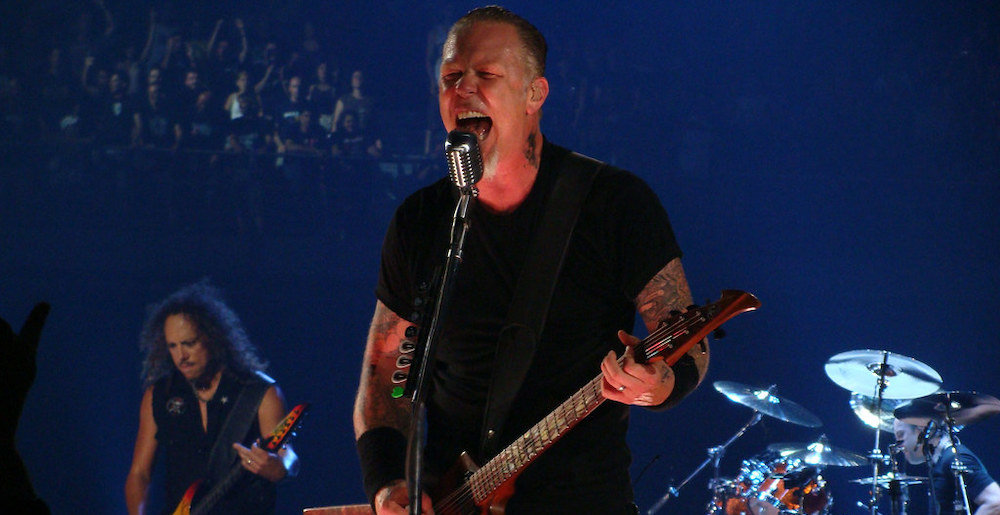 James Hetfield’s precise right hand is the stuff of legends. So is Lars Ulrich’s struggles with consistency, to put it gently. Put these two Great Metallica Truths together and one might posit that it’s Hetfield who leads the band’s live show (in most bands, everyone follows the drummer). But we don’t even have to posit: Gojira’s Joe Duplantier just confirmed as much via personal anecdote, albeit in a bit of a roundabout way.

Speaking with Rock Sverige, Duplantier relayed the story of how we was allowed to listen in on Hetfield’s live monitor mix when the two bands toured together years ago, and what he heard was shocking. SHOCKING, I say! You won’t believe what happened next. Click here to find out the UNBELIEVABLE TRUTH!

Whoops, sorry, got carried away there…

Here’s the story straight from Joejira:

“If there was a school for rock, he would be my teacher. I want to follow his course. His right hand is a hammer, an unstoppable hammer. He’s the foundation of the rhythmic section in Metallica. I think Lars is just dancing around James’ guitar. Everybody follows James.

“One time we were on tour with them, we became friends with their monitor engineer because he was doing our monitors too, we hired him. We gave him like $100 in cash every day, ‘Can you do our monitors? We don’t have our own monitor guy,’ and he was like ‘I got you.’

“Then when Metallica played, one time he gave me James’ spare in ears. This little box, a receiver. He said ‘Joe, come here,’ because he saw me watching James and analyzing his fucking right hand. It’s out of this world. It’s not necessarily impressive on a technical level, it’s the precision and the consistency and it’s sharp. He gives me a little radio there and I plug it in, I have my own in ears and I’m like ‘Oh my god, oh my god! This is James’ fucking monitors! What?’

“I plug them in and put it in my pocket and look at him and I was amazed to see that there was almost no drums in there. Who does that? What? Maybe there was some hi hat, but he was flying through the songs, playing and singing and it was only him in his monitors. A little bit of drums to stay connected to the rest, but some people need a lot of drums because they’re so chaotic and are just sitting on the drums, like in my case for example.

“This guy can do a whole show and I’m pretty sure everybody’s following him, even Lars. I think Lars follows James when he plays.”

That is quite something, although it’s not wholly surprising if you’re familiar with the dynamics of Metallica. I also dig the humility: Joe Duplantier, one of the metal greats, still in awe of his hero.

Gojira’s new album, Fortitude, comes out on April 30 via Roadrunner Records. You can check out its two singles so far, “Amazonia” and “Born for One Thing.”

Metallica, meanwhile, are currently deep into “some pretty serious writing” for their next album. After first floating the idea of working on new music while under quarantine in April, by June Lars Ulrich had revealed that Metallica were, indeed, in writing mode. James and Rob have both said they’ve been busy working on new songs, too, and Kirk Hammett has trumpeted the fact that he has over 600 song ideas recorded (after infamously losing his cell phone with 300+ ideas prior to the sessions for Hardwired). The band were having some technical issues collaborating over the internet and were looking into doing so in-person in a bubble last they checked in, but that was months ago already, and Lars recently revealed that new material was coming along at a “glacial” pace.

Metal Sucks Greatest Hits
0 -
Will People Please Shut Up About the “Fake Amps on Stage” Debate?
0 -
New Candidate for Most Metal Wedding Ever: Bride and Groom Shred Down the Aisle
0 -
Rigged: Testament Guitarist Alex Skolnick
0 -
That Time Shaun Got Drunk and Filmed a Music Video with His Cat
0 -
BREAKING: Slipknot Guitarist Mick Thomson Stabbed in the Head by Brother
0 -
Footnotes: A Handy Catalog of Every Song from Which Avenged Sevenfold’s Hail to the King “Borrows”