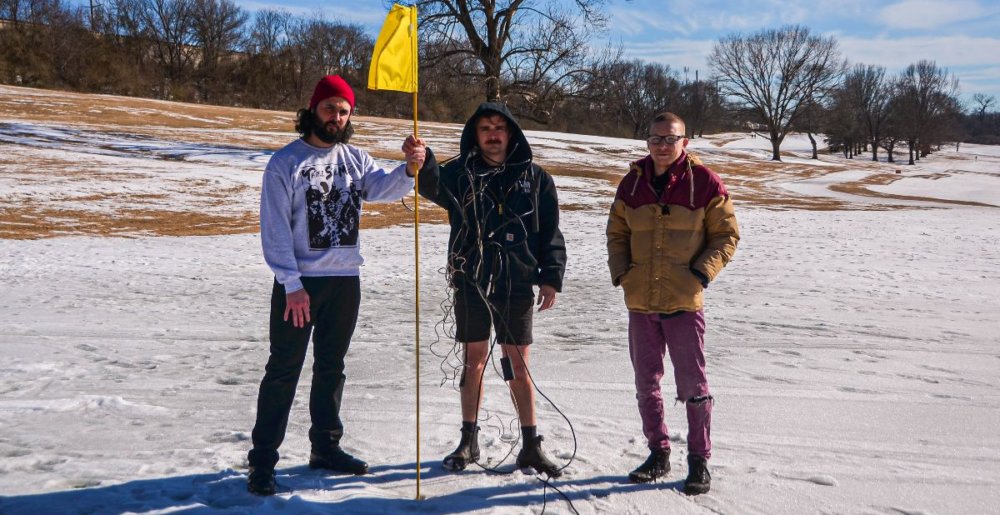 Yautja are the Anti-Spectacle in “The Spectacle”

I absolutely love Yautja’s new promo photo (above, by Chappy Hull). No tough guy posing, no special outfits, no extra lighting… nothing cool about it. Just three ordinary guys on a partially snowed over golf course looking at the camera, one of whom has a bunch of wires dangling from his body. The photo looks to have been taken during the shoot for their previous music video, “Tethered,” which makes the fact that they’re rolling with it as an “official” band photo even better: it feels like a giant F-you to staged band promo photos everywhere. Love it love it love it.

I also love Yautja as a band, as I raved about previously. And I love that none of their three members could be bothered for a comment on their newest single, “The Spectacle,” so instead they roped their pal, Mike Paparo of Inter Arma, into commenting on their behalf. Says he:

“The Spectacle, huh? I think the real spectacle here is that these three extraterrestrial life forms came together to create such alien but still undeniably organic and human music. A group that’s truly from some other world. Visit it. It’s worth the journey.”

Amen to all of that! Give “The Spectacle” a spin below via Decibel. The Lurch comes out on May 21 via Relapse; pre-order here.

Last year saw Portrayal of Guilt release not one but […]