Metal Sucks
Metal Sucks The Problem with the “Lars Was Right About... Watch Dave Grohl and His Daughter Cover X With Dave...
- Tweet SHARE
Enlarge
Editorials 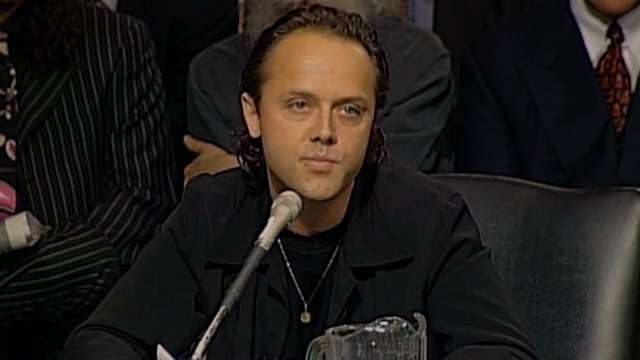 The Problem with the “Lars Was Right About Napster” Argument

In my sleepless haze last night I came across this headline on Blabbermouth: “Corey Taylor Says Lars Ulrich Was ‘So Right On So Many Levels’ About Napster.” That line alone made me angry, so I moved on, knowing I’d likely return in the morning to cover it in the usual way, because who can resist a story about Slipknot AND Metallica? Throw in Napster and it’s a can’t-miss hit factory the likes of which even Bob Rock and Ross Robinson have never known.

But upon returning to it moments ago after proper caffeination, I felt I should take a different angle with my coverage, because this certainly isn’t the first time we’ve seen “Lars was right” gobbledy-gook from musicians and it certainly won’t be the last. It needs to be addressed on its own, because I friggin’ hate when I see that bullshit.

But let’s back up. First, for context, here’s Corey’s full quote, which came on the latest episode of the “Wild Ride! With Steve-O” podcast (yes, that Steve-O):

“It’s kind of weird, it’s kind of hard, because in this day and age, it’s really hard to know which ones of the fucking streaming services actually compensate the artists that they’re ripping off. It’s more important for me that people listen to the music. At this point, I’ve kind of made peace with the fact that there are various services who are just kind of screwing us, and until the legislation is actually enforced, which they passed under Trump — which I couldn’t fucking believe — they’ll keep charging us at that rate. But they’ve appealed that legislation. I don’t think the appeals will actually go through. They will raise the rates, and musicians will be able to make a living off their recordings again.”

Corey continued, and here’s the part about Lars and Napster:

“I remember everyone giving him so much shit ’cause of that, and he was so right on so many fucking levels, dude. It’s scary. And I wonder how many people look back and eat a little crow because of that… ‘Cause he knew — he knew that this was the direction we were going.”

Corey’s argument: Lars was “so right.” “He knew that this was the direction we were going.” That’s something we’ve been hearing lately from other artists, too. Lars knew! He was a prophet! We should have listened instead of castigating him!

But *what* did Lars know? Lars knew that Napster would be the end of the music industry as we knew it in the year 2000. Yeah, no shit! We all knew that. We knew it the very first time we opened Napster on a dedicated T1 line at school or work, searching for and downloading entire artist catalogues in mere minutes. We even knew it when we had to wait an hour to download a single track we’d heard on the radio over our dial-up modem at home. It was starkly and immediately obvious: this was the future.

Here’s what Lars got wrong, and why he took so much criticism at the time: that suing Napster into oblivion was the answer. That course of action was never going to be fruitful, because once the can of worms was open — once the internet existed inside peoples’ homes, basically — it was a foregone conclusion that music would eventually be greatly devalued. It’s that simple: once the means of distribution changed, the record companies and rights holder could no longer maintain their price controls, and the floodgates were open. Lars is not a genius for recognizing what every music consumer with a computer at the time also knew. What was the expected result? Sue the internet out of existence to maintain the dominance of CDs forever? It makes no sense at all.

Which is why when people say that “Lars was right” they’re merely stating the obvious. But that’s not what everyone was saying he was wrong about in the first place! When people criticize Lars for how he handled Napster, they’re saying that no course of action, legal or otherwise, was ever going to halt music downloading (and eventually streaming), so complaining about Napster — and doing so quite loudly, and at great expense — was always a fool’s errand. Once Napster was taken down, Kazaa and Limewire popped up in their place… the trend was unstoppable! A game of whack-a-mole. Because you can’t get in the way of progress.

So: Lars was not right. Lars was wrong. He was wrong to sue Napster and launch a public relations campaign against it, because that was never the answer. It took several years for the technology to catch up, but streaming services were always inevitable, too, and no amount of high-powered lawyers were ever going to stop that. With the gates of distribution lowered, there was nothing anyone would be able to do about the resulting lowered income from recorded music. And it’s not going back, other than perhaps the marginal legislative increase to which Taylor is referring above.

I’ve been saying this for years, but it bears repeating: the period lasting roughly from 1950 through 2000 was an aberration, not the norm. At no other time in history prior to that had musicians been able to sell their recorded music at great profit, and at no point in the future will they be able to again. It was a blip, a spike, a rarity that that was ever able to happen. Streaming is the course correction, not the downfall.

Metal Sucks Greatest Hits
0 -
Scientific Proof That Djent is a Genre
0 -
Jack Daniels Releases Single Barrel Whiskey in Honor of Motörhead
0 -
Nothing to See Here, Just Some Photos of Cats Wearing Metal Battle Vests
0 -
Listen to Metallica’s “Nothing Else Matters” in a Major Scale
400 -
Danzig is Just Cleaning Up His Motherf*cking Bricks, Bitch
540 -
Worst Year Ever: All of Our 2010 Year-End Sh*t in One Place