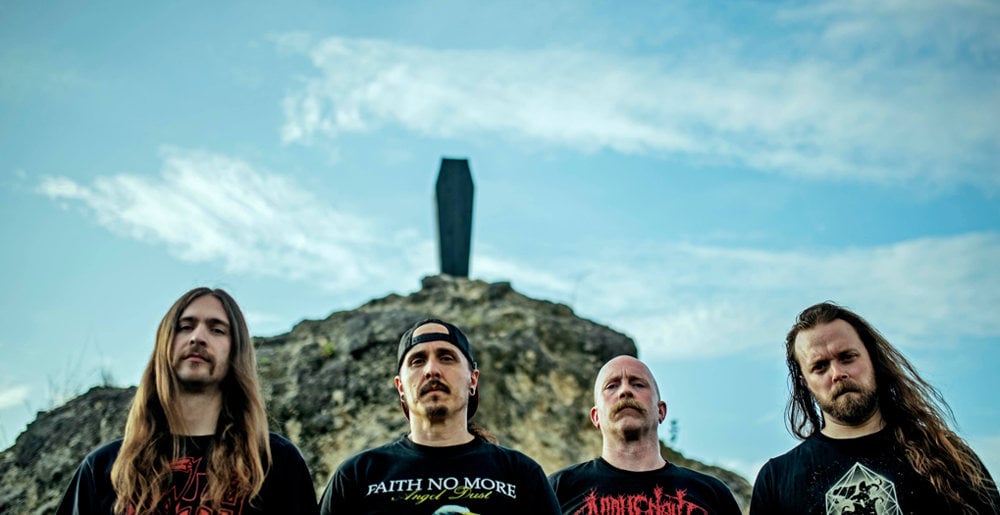 The Absence Get “Coffinized” in New Single/Video

Jeramie Kling and Taylor Nordberg win the award for two busiest metal musicians during quarantine… with albums from Goregäng, Inhuman Condition and now their OG outfit, The Absence, dudes have been insanely productive!

Following “Choirs of Sickness,” the first single from The Absence’s forthcoming album, Coffinized, the melodeath masters have now unveiled the record’s title track along with a music video. The song’s got all the riffery one might expect from The Absence, who never disappoint, and the visual clip is a fun accompaniment that leaves me wanting to explore the woods/jungles of Florida.

“We have all been ‘Coffinized’ at one point or another – trapped in a distant, funerary bubble, obscured under a dark, brooding outlook. As one lingers for a collective exhale, it calls out – a seeping, miserable existence disguised. Such horrors hidden by means of mental escape. But being engulfed by your own disgust and inability can be suffocating: it collapses in, embalming into your being. You become a living casket for all of your own bitter frustrations – nailed in and buried alive.”

You can watch the video for “Coffinized” below. Coffinized is set to be released on June 25 on M-Theory Audio; pre-order here.

Sponsored Links from Across the Internet
Show Comments
Related Articles
Everyone's Replaceable 0
And the New Guitarist for Deicide Is…
January 21st, 2022 at 9:46am MetalSucks

Here’s your guide to all of this week’s heaviest new releases! Includes Darkthrone, Light the Torch, The Absence, Amenra, and more!!!

So shreddy Rudy Giuliani tried to use it destroy incriminating documents.