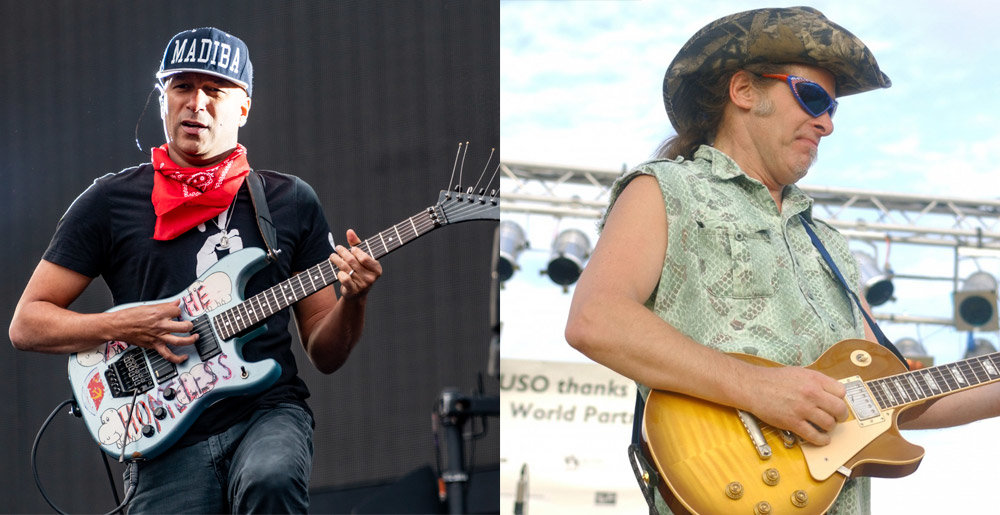 The friendship between liberal activist Tom Morello and conservative whacko Ted Nugent is unlikely, but the Rage Against the Machine guitarist explained earlier this year that the two are pals who regularly exchange birthday pleasantries and have a lot more in common than you’d think.

Morello has now doubled down and defended that friendship in response to those who argue he shouldn’t engage at all with the Motor City Madman.

Speaking to NME, he explained that it’s important to “keep an open dialogue with people you disagree with,” adding that it’s his choice whether to do so or to institute the ol’ social network block, as he reserves the right to do. He said:

“I reserve the right to be friends with anybody. I reserve the right to confront opinions I disagree with, with open heartedness and love, or by throwing a brick. That’s up to me. In the case of Ted, I know he’s become this right-wing caricature but there have been several times where I have reached him on issues that you might be surprised about. But he is still crazy uncle Ted who says all sorts of shit.”

“It can be important to keep an open dialogue with people you disagree with, especially in this global community of disagreements. Sometimes it’s just as important to block them, though.”

So there ya go: not only is Morello right on politically, but he’s open-minded and cordial, too!

Earlier this year, Morello explained his friendship with Nugent as follows:

“You might be surprised that Ted Nugent and I are good friends. For his 60th birthday, someone reached out to me and said, ‘We’re making a video, and we’re asking guitar players – would you make a video [for Ted]?’

“At the time, the Ted Nugent was sort of known in the world in general as this kind of more right-wing caricature – people were not thinking of him, first and foremost, as the guy who shredded on ‘Stranglehold.’

“But then I had to think, ‘What is the video that I’m going to make for Ted’s birthday?’ And I put some thought into it, and I said, ‘It’s gonna be about two things. One, it’s gonna be things that Tom Morello and Ted Nugent have in common.’

“And I went down this long list of, like, free-speech advocates, our love of rock ‘n’ roll, our respect for black artists who created rock ‘n’ roll…

“And then the second was things that Ted Nugent taught an adolescent Tom Morello about sex.

“And I had to ask about it on the playground. Anyway, so Ted called me up after that. And while we certainly have differences, I consider him a friend.”

Metal Sucks Greatest Hits
0 -
Chris Brown Thinks Municipal Waste are a Fashion Statement
0 -
The Best Metal Albums of 2013, As Chosen by Metal Musicians Themselves — Part I: Machine Head’s Robb Flynn
0 -
David Hasselhoff’s “True Survivor” Music Video Just Broke the Internet
0 -
What If Metal Album Covers Were Truthful?
0 -
Etienne Sin: What the Actual Fuck
0 -
I Am The Working Class: The MetalSucks Interview with Fenriz