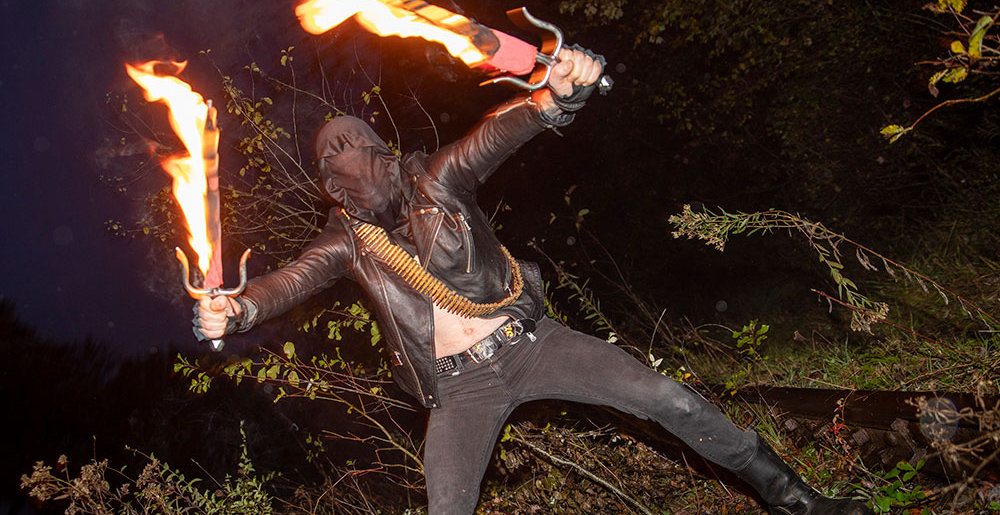 Midnight’s new song is called “Szex Witchery.” I was wondering if “szex” really meant “sex” in another language or was a made-up word, so I Googled it. A bunch of Hungarian pornography came up. So I guess it’s a real word.

ANYWAY, “Szex Witchery” is the first single from Midnight’s newly-announced fifth full-length, Let There Be Witchery. If you’ve heard Midnight, you know what to expect; if you’ve never heard Midnight and you can’t tell what kinda music they make based on the promo photo up top, okay, I’ll clue you in: it’s Venom-esque not-quite-black metal. If leather jackets, bullet belts, black hoods, flaming swords, and exposed bellybuttons in the middle of the woods don’t do it for you, skip this.

Everyone else: I think this is pretty dang great. I particularly like the last minute or so, which is based around a fairly slow, totally ominous-sounding riff. Good stuff!

“If I were to give actual good advice, I would say stay clear of anything to do with Midnight. But I’m not a rational thinker, so as usual, I will give terrible advice and say punish your earholes and play this album as loud as your stereo goes, go out to a gig and mingle with others that you don’t know, lick their faces and rub upon each other’s sweaty torsos to the hellish, neanderthalish noise of a band called Midnight! You gotta release your demons somehow! That’s why you should give a shit, or two.”

“Szex Witchery” is available for your listening pleasure below. Let There Be All Kinds of Witchery, Szexual or Otherwise comes out March 4 on Metal Blade. Pre-order it here.

Sponsored Links from Across the Internet
Show Comments
Related Articles
Tour de Force 0
Dimmu Borgir, Gorgoroth, and Six Other Bands Confirmed for Beyond the Gates
November 17th, 2022 at 9:56am Hesher Keenan

Behold sonic blasphemy in all its sweaty glory!

Metal Sucks Greatest Hits
0 -
That Time Shaun Got Drunk and Filmed a Music Video with His Cat
0 -
The Single Greatest Analysis of Nickelback’s Work Ever Written
0 -
Rigged: Luc Lemay of Gorguts
0 -
50 Things You Never Knew About George “Corpsegrinder” Fisher’s Neck
0 -
15 Ways Your Unsigned Band is Doing It Wrong
0 -
Video: Dudes Rockin’ Out to Van Halen Meet David Lee Roth, Have No Idea Who He Is