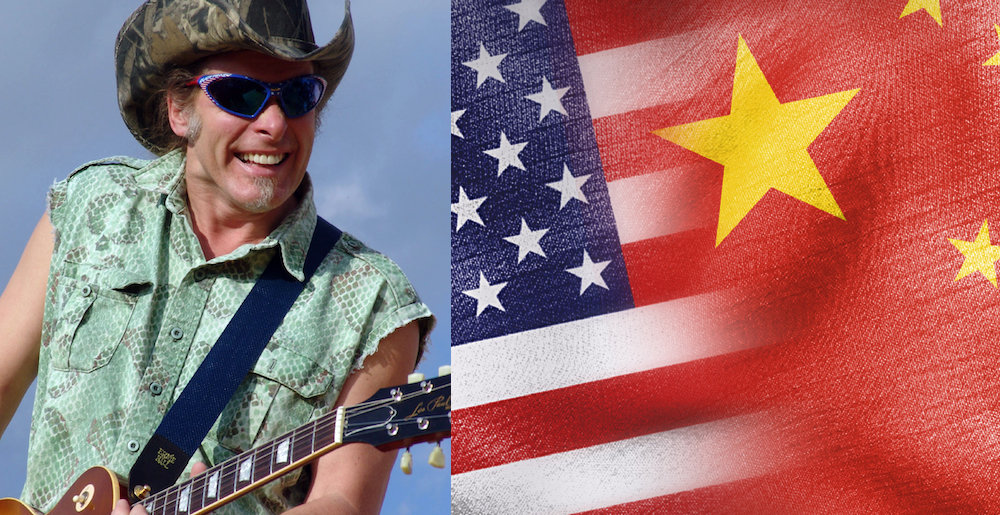 Ted Nugent Will Bail On Fans at Venues Requiring Masks, Says the “Communist Chinese In The White House” Canceled His 2020 Tour

Last week, old-man rap-rocker Kid Rock publicly declared that he won’t play any venue that instates a mask or vaccine mandate on his upcoming tour, thus ensuring that at least some of his hard-working fans will get fleeced of their money for reasons beyond their control. But Ted Nugent won’t be outdone by the likes of Kid Rock, and so has also declared that he also plans to disappoint his fans who’ve bought tickets for his upcoming tour at any venue where the managers care about employee health and safety.

In his latest YouTube stream of consciousness (transcribed here by Blabbermouth), Ted made it clear that he won’t uphold his end of the bargain if masks are required.

“Tickets go on sale tomorrow, I think, for this gonzo beach party rock and roll concert headlined by Ted Nugent in Panama City [Florida] on April 29th. Write that down. That’s confirmed. There’ll be no mask mandates; there’ll be no bullshit. And the next night, the headliner is my buddy Kid Rock. I’m not promising anything except we’re gonna rock your brains out, but on the 30th when Kid Rock is headlining Panama City, the big beach party concert, he always plays [Nugent’s classic song] ‘Cat Scratch Fever’ every night, so maybe I’ll stick around and go up there and show him how to play it. It’s a possibility.

“2020, the communist Chinese in the White House wouldn’t let the tour happen. Well, some people went on tour. And they played a place where you had to show paperwork or wear a mask. I’m not playing a place that plays Nazi jackboot. If there’s some kind of unconstitutional mandate… By the way, mandates… You can’t mandate shit. You can’t mandate anything to me. You have no mandate authority. This isn’t communist China, even though Joe Biden thinks it is, and he’s helping it become that. But if there’s a mandate for a mask that’s been proven scientifically not to work… There’s guys out on motorcycles doing 60 miles an hour with a mask… That’s a country music fan, if ever there was one.

“So, hopefully the Uncle Ted shitkicker American campfire ‘Detroit Muscle’ tour 20-clusterfuck-22 will finally happen after the communist Chinese Biden gang canceled it in 2020 and 20-clusterfuck-21. Let’s hope. ‘Cause we’ve got a lot of dates in June, July and August.”

What else is there to say? It’s like you brainwashed someone with OAN and Dukes of Hazard reruns, then shoved a lot of peanut butter in his mouth and told him to talk until he passed out.

Anyway, good luck to all of Ted’s fans, and happy Chinese New Year to our Asian readers!