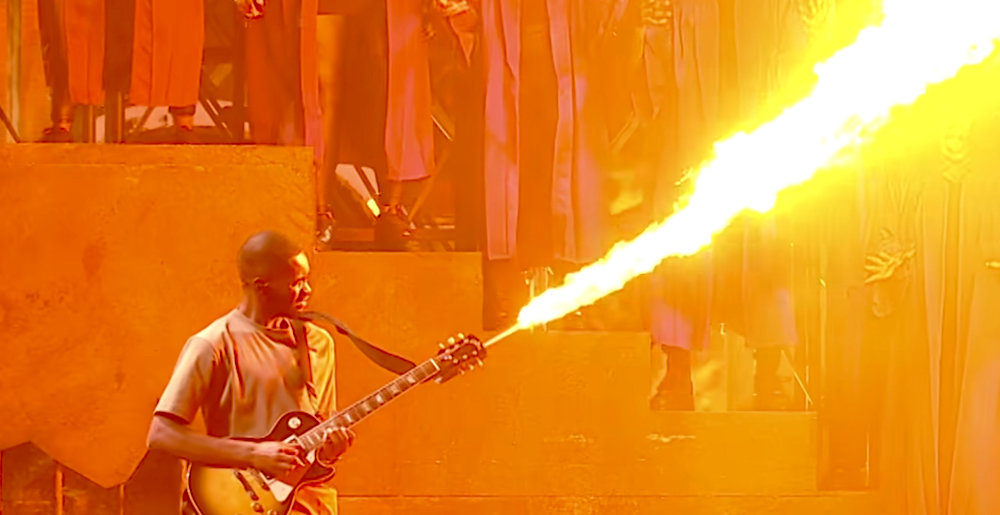 Video: Rapper Dave Plays a Solo on a Flamethrowing Guitar at the BRIT Awards

So on the one hand, last night’s BRIT Awards included Ed Sheeran and Bring Me The Horizon’s pretty terrible jam of “Bad Habits.” BUT! It also had rapper Dave firing off a gigantic flamethrower from his guitar while playing a solo on it. And THAT is fucking metal.

Full disclosure, we do not know anything about Dave or his music. According to his Wikipedia, he is a British rapper from Brixton. We also don’t know how seasoned he is at the guitar, so some of you guitar nerds can clarify whether his technique is fine or wack. We WILL say that the solo he plays, though not perfect, is pretty damn good, and the fact that he gets to play it while shooting a 15-foot jet of flame across stage is pretty fucking killer. We wish events like these would involve fewer nu-metal breakdancers and more flamethrowing instruments.

Watch Dave kill The Thing below:

Metal Sucks Greatest Hits
400 -
Danzig is Just Cleaning Up His Motherf*cking Bricks, Bitch
1230 -
Loutallica’s LuLu: The MetalSucks Reviews
0 -
Video Footage of Emmure’s Frankie Palmeri Getting Electrocuted On Stage in Russia
0 -
Watch This 10-Year-Old Girl Shred Through Slayer’s “War Ensemble”
0 -
Rigged: Luke Hoskin of Protest The Hero
0 -
Report: “The Number of Heavy Metal Bands in a Given Country is Associated with its Wealth and Affluence”