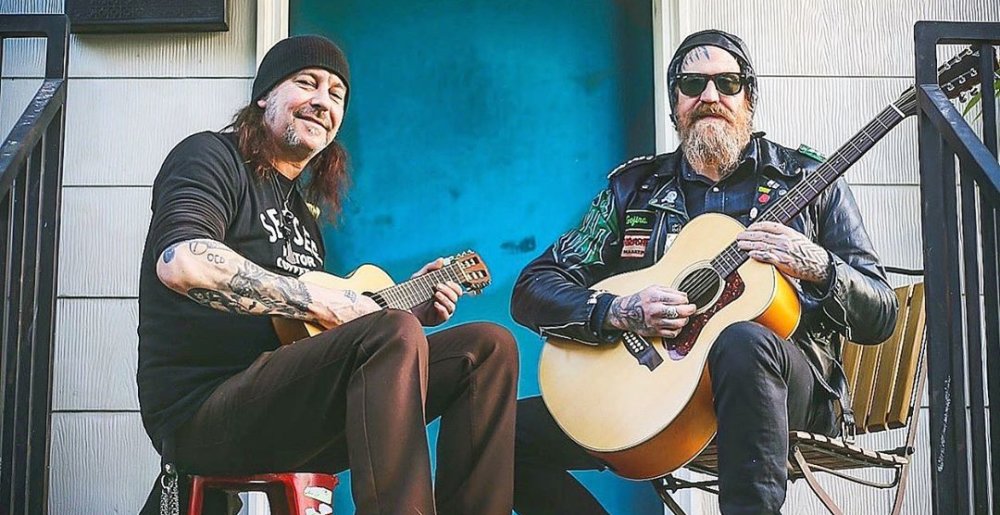 Last December saw High On Fire frontman Matt Pike announce his first solo album, Pike vs. The Automaton, along with an initial single titled “Alien Slut Mum.” Now, Pike has dropped another track, this one a collaboration with Mastodon guitarist Brent Hinds called “Land,” and man do these guys wish they were Tom Waits.

The love for Small Change isn’t exactly unexpected for Pike and Hinds, who’ve always courted that down-and-out, cleverer-than-your-average-bear hobo thing. Hinds especially used to talk about how he once rode in boxcars and shit. So while the track’s laid-back vibe might not be what your average metalhead expects, longtime fans of either of these dudes’ main bands won’t be surprised. The video accompanies the track perfectly, with its silent-film depiction of Hinds as a hobo brawler in a back-room fight.

Here’s what Pike had to say about the track:

“‘Land’ was written after I had just come home from a tour. It’s like an old blues song. I was thinking of it as like a bunch of old dudes in a subway doing a doo-wop thing. It has the feel of a two-step like my Mom used to dance to, like Country Western. It’s totally about depression and leading a hard life. Later, I was playing the song for Brent Hinds from Mastodon who had come out to Portland to jam with me and he laid down this smokin’-ass Billy Gibbons kind of solo! I did one solo and then he did his solo and I’m like, ‘You’re a dick.’ (laughs). The bass player from Brent’s other band West End Motel, Steve McPeeks, played some stand-up bass – both plucking and with a bow – and it really brought out this depth to the song. I’ve never written a song like that and recorded it and made it as cool as it is. It’s totally different.”

Check out “Land” below. Pike vs. The Automaton comes out February 18th from MNRK heavy, and is available for preorder.

Metal Sucks Greatest Hits
2080 -
The History of Metalcore/Screamo
0 -
The Single Greatest Analysis of Nickelback’s Work Ever Written
0 -
Will People Please Shut Up About the “Fake Amps on Stage” Debate?
540 -
Matt Pike’s Top Ten T-Shirts
7590 -
If I Read One More Thing About Arcade Fire I Am Going To Puke
0 -
Rigged: Slipknot Percussionist Shawn “Clown” Crahan